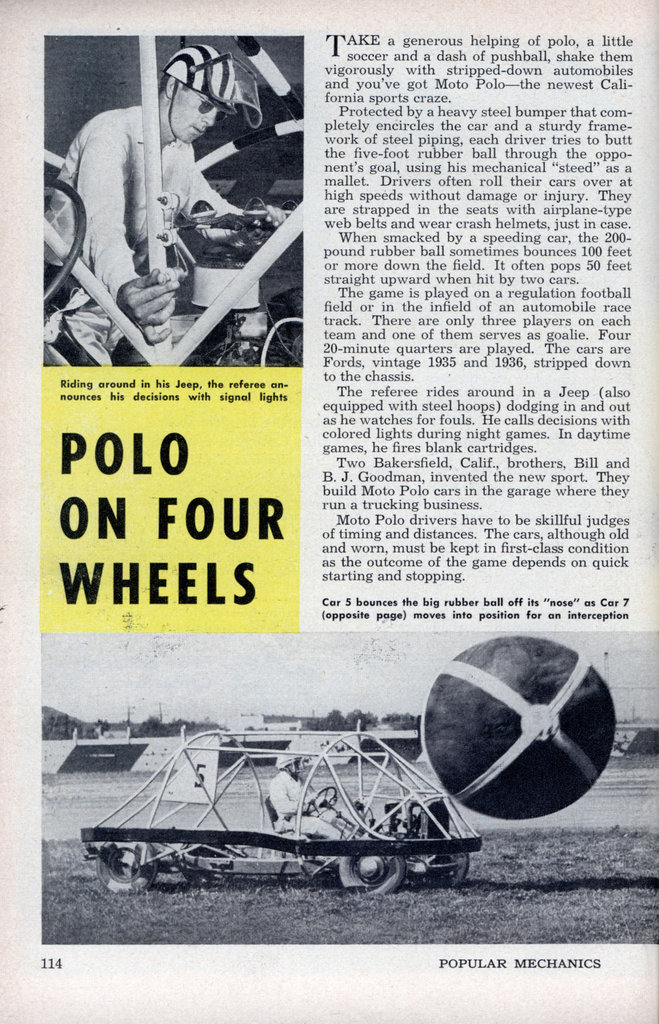 TAKE a generous helping of polo, a little soccer and a dash of pushball, shake them vigorously with stripped-down automobiles and you’ve got Moto Poloâ€”the newest California sports craze.

Protected by a heavy steel bumper that completely encircles the car and a sturdy framework of steel piping, each driver tries to butt the five-foot rubber ball through the opponent’s goal, using his mechanical “steed” as a mallet. Drivers often roll their cars over at high speeds without damage or injury. They are strapped in the seats with airplane-type web belts and wear crash helmets, just in case.

When smacked by a speeding car, the 200-pound rubber ball sometimes bounces 100 feet or more down the field. It often pops 50 feet straight upward when hit by two cars.

The game is played on a regulation football field or in the infield of an automobile race track. There are only three players on each team and one of them serves as goalie. Four 20-minute quarters are played. The cars are Fords, vintage 1935 and 1936, stripped down to the chassis.

The referee rides around in a Jeep (also equipped with steel hoops) dodging in and out as he watches for fouls. He calls decisions with colored lights during night games. In daytime games, he fires blank cartridges.

Two Bakersfield, Calif., brothers, Bill and B. J. Goodman, invented the new sport. They build Moto Polo cars in the garage where they run a trucking business.

Moto Polo drivers have to be skillful judges of timing and distances. The cars, although old and worn, must be kept in first-class condition as the outcome of the game depends on quick starting and stopping.