Popular Science
Issue: Jun, 1938
Posted in: DIY
2 Comments on Popsy – A Simply Made Dummy for the Amateur Ventriloquist (Jun, 1938)

Popsy – A Simply Made Dummy for the Amateur Ventriloquist (Jun, 1938) 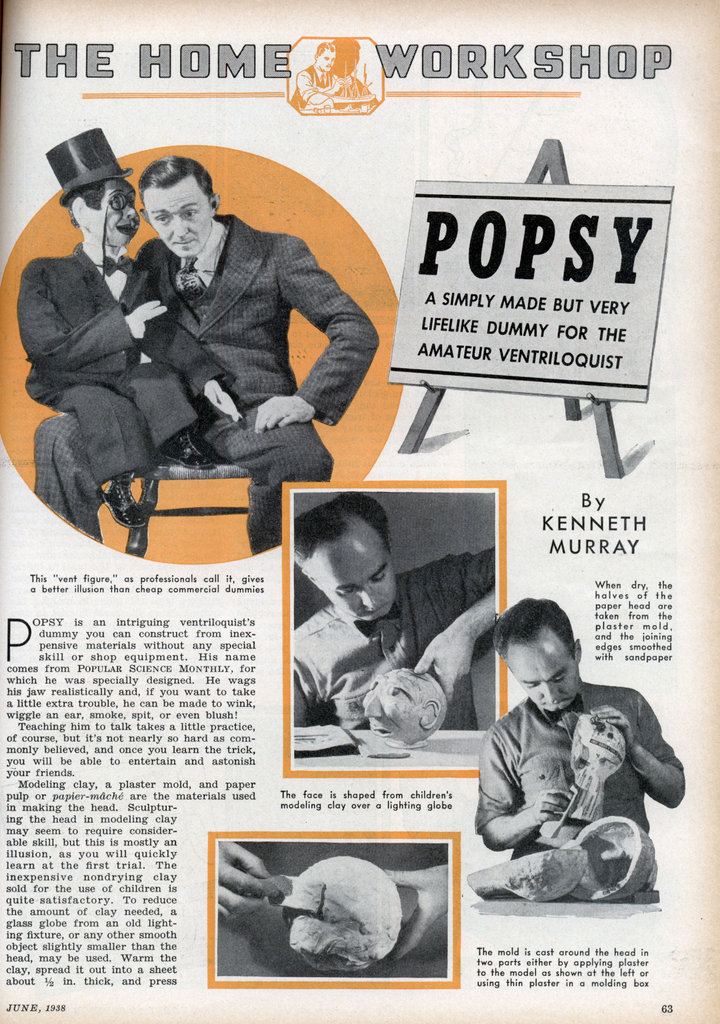 POPSY is an intriguing ventriloquist’s dummy you can construct from inexpensive materials without any special skill or shop equipment. His name comes from Popular Science Monthly, for which he was specially designed. He wags his jaw realistically and, if you want to take a little extra trouble, he can be made to wink, wiggle an ear, smoke, spit, or even blush!

Teaching him to talk takes a little practice, of course, but it’s not nearly so hard as commonly believed, and once you learn the trick, you will be able to entertain and astonish your friends.

Modeling clay, a plaster mold, and paper pulp or papier-mache are the materials used in making the head. Sculpturing the head in modeling clay may seem to require considerable skill, but this is mostly an illusion, as you will quickly learn at the first trial. The inexpensive nondrying clay sold for the use of children is quite satisfactory. To reduce the amount of clay needed, a glass globe from an old lighting fixture, or any other smooth object slightly smaller than the head, may be used. Warm the clay, spread it out into a sheet about 1/2 in. thick, and press it with the fingers over one half of the globe so that the face part of the head may be shaped first. If small pieces of waxed paper are placed underneath the clay so that they overlap, it will be easier to separate the clay from the globe later on.

Take a small lump of clay between your hands and with a back-and-forth movement of the palms form it into a long roll. Strips of this can be pressed in place on the face to the shape of the mouth and eyebrows. Roll another chunk between your hands to form small balls, which will serve as the foundation for cheeks and nose. Cut a small ball of clay in half with a knife and attach each half in place for protruding eyes.

The clay should by now have some semblance of a face, but it will require the addition of other small pieces and considerable smoothing up. Go over each of the crude features you have made with a finger or thumb, imparting a sliding pressure so that the parts will be nicely blended into the background clay. It will be necessary to place extra bits of clay here and there, and to add a cardboard sleeve to the mouth of the globe in order to shape the neck. If you intend setting movable eyes into the head later, it is advisable to shape only the bare eye sockets, because the eye holes can be cut in the face of the paper head when it is made.

If you do not wish to use artificial (crape) hair in finishing the head later, you can secure a hair effect by passing the teeth of a fine comb over the clay to leave shallow furrows.

The back part of the head is quickly made in a similar manner. If you wish, this can be done after you have finished with the globe in making the face, because the mold is cast in two partsâ€”the front and the back of the head. Be sure that the clay is of the same thickness in both halves so that the paper halves of the head can be joined up later.

Lightly oil or grease the clay before making the plaster mold. One method is to mix up a batch of fairly thick plaster of Paris and dab it over the clay, gradually building it up into a thick mold. Be sure that the plaster reaches every part of the surface and that it contains no air pockets. A method that requires more plaster is to use a thin mix, pour it into a box of suitable size, and press the clay face part way into it. Again, avoid air pockets.

Allow the plaster to set and dry for several hours before attempting to remove the model from the half mold. If any bits of clay should stick to the mold when the model is lifted out, remove them carefully. It may be necessary to wait a day or two until the mold is perfectly dry, when the inside should be coated with petroleum jelly.

Ordinary newspaper is satisfactory for molding the head. Soak it for a few minutes in a wallpaper-paste solution, then tear off small, irregularly shaped pieces and press them in place inside the plaster mold. Allow each to overlap slightly, and be sure that all indentations are reached. The paper should be built up into a thickness of about 3/16 in., and it is most satisfactory to build up a thin layer and allow it to dry before adding succeeding layers. The paper form must be absolutely dry before it is lifted out, and the halves (face and back of head) can then be trimmed with scissors so as to fit together evenly.

At this time you can introduce the various mechanisms, if you wish to use more than the mouth movement. It is much simpler to do so now than to insert them through the neck opening later. Various suggestions are given in the accompanying drawings.

Join the halves with glue and, when it is dry, reach in through the neck and reenforce the joint with more pieces of newspaper that have been soaked in paste. The outside must then be thoroughly gone over with fine sandpaper to give it a perfectly smooth finish.

One of the illustrations shows how the chin is separated from the head with a razor blade to provide the mouth movement. A block of wood, one end rounded, is glued inside the chin, and the other end hinged as shown in a drawing. Cement a piece of thin chamois over the opening underneath the chin; then enamel the entire head a flesh color.

Artificial hair is attached with cement, or hair may be simulated with dark enamel.

THE body is only a wood frame covered with cloth and padded to represent the trunk.

Over the body frame is fitted either an adult’s suit that has been altered or a child’s outfit of the correct size. The arms and legs are merely cloth sleeves that have been well padded and sewn across to represent joints.

In making up the face, photo oil colors may be used on the lips and cheeks and to simulate the eyebrows and eyelashes, unless the latter are made of actual hair.

How to become a ventriloquist is the next problem. The beginner is often told that the word means “to speak from the belly.” This is as much a fallacy as the favored expression that a ventriloquist “throws his voice.”

The very essence of the work, expressed simply, consists first in the cultivation of a pleasant, full-toned speaking voice of your own and the enunciation of each word clearly with a full movement of your lips. This is the voice in which you address the figure. Second, you will need to develop a new voice, as unlike your natural voice as possible, and coming from as deeply in your throat as possible. In other words, draw the sounds from your throat instead of forming them in the mouth. This is not difficult to learn. Third, in using the latter voice, keep your lips slightly parted but absolutely immovable. Some professionals utilize for this purpose a device known as the “Abbott gimmick,” a recently developed mechanical aid in keeping the teeth parted. Do not mistake this for the so-called “double throat” or “bird warbler.”

The best plan is to practice before a mirror with the figure on one knee and with finger or thumb in the ring that controls its mouth movement. The head can be turned by turning the control stick. Speak to the figure in your natural voice, using full lip movement. When it is time for the figure to reply, talk in your “new” voice without movement of the lips, and move the figure’s mouth to synchronize with the sounds. Avoid words containing letters such as b, m, and p, which must be slurred in order to avoid moving the lips. Above all, look at the figure as if you actually were listening to it speak.