Portland hipsters froze themselves in blocks of ice way before it was cool. 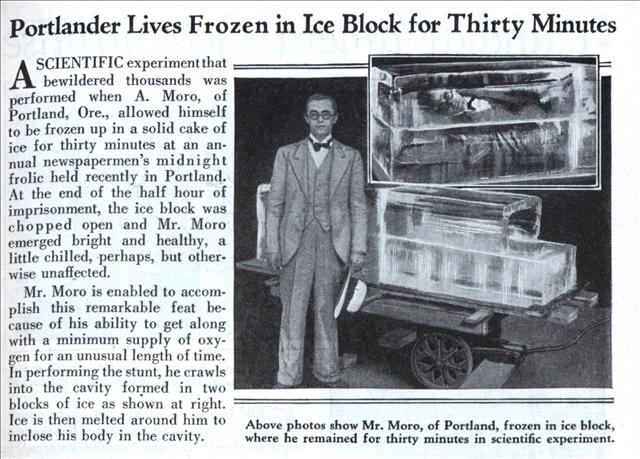 A SCIENTIFIC experiment that bewildered thousands was performed when A. Moro, of Portland, Ore., allowed himself to be frozen up in a solid cake of ice for thirty minutes at an annual newspapermen’s midnight frolic held recently in Portland. At the end of the half hour of imprisonment, the ice block was chopped open and Mr. Moro emerged bright and healthy, a little chilled, perhaps, but otherwise unaffected.

Mr. Moro is enabled to accomplish this remarkable feat because of his ability to get along with a minimum supply of oxygen for an unusual length of time. In performing the stunt, he crawls into the cavity formed in two blocks of ice as shown at right. Ice is then melted around him to inclose his body in the cavity.