Postal flyers Succeed Against Odds in “Bringing” Mail Through (Jul, 1930) 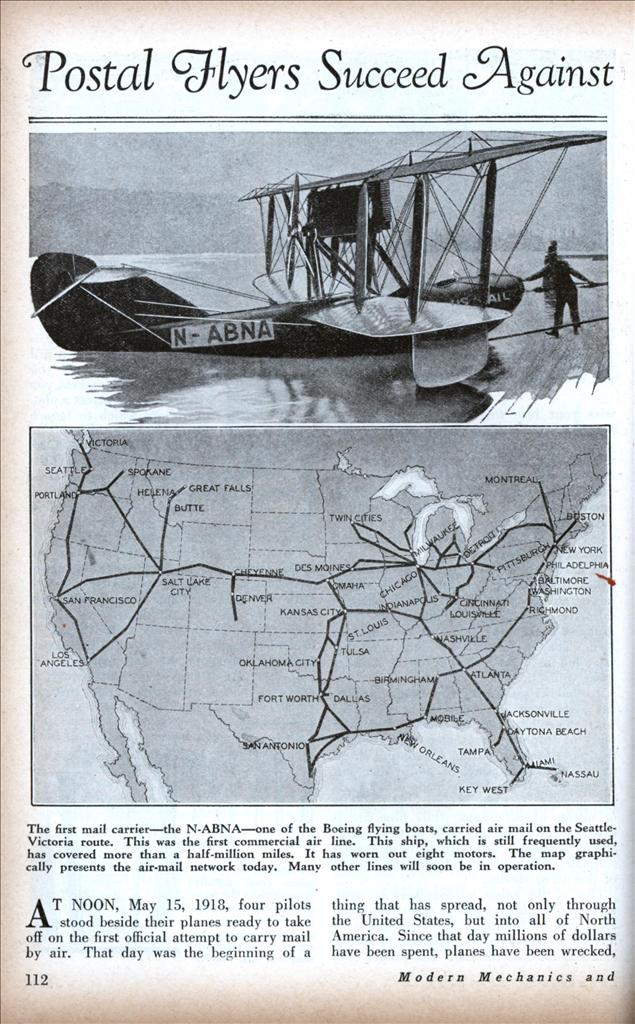 Postal flyers Succeed Against Odds in “Bringing” Mail Through

AT NOON, May 15, 1918, four pilots stood beside their planes ready to take off on the first official attempt to carry mail by air. That day was the beginning of a thing that has spread, not only through the United States, but into all of North America. Since that day millions of dollars have been spent, planes have been wrecked, and pilots killed, but the air mail goes on and it stands today as one of the great affairs of the nation.

The four men who took off on the first flight were United States Army pilots loaned to the Postoffice Department for the trial flight. One plane was in New York, another in Washington, while two pilots waited in Philadelphia to relay the mail in each direction to its destination. The first sack of mail weighed only four and a half pounds but now thousands of pounds are sent through the air over millions of miles from east to west, from north to south, by day and by night.

It was perhaps beyond the hopes of the most optimistic in 1918, when those first pilots took off, that in a short ten years the country would be a network of air routes carrying mail, and passengers, and express, but such is the situation and even now it is only a beginning of what will be developed within the next ten years.

In just three months after the first experiment the air mail was taken over by the Postoffice Department with its own planes and pilots and those borrowed from the army were returned to their own department. Then came the establishment of regular lines which speeded up the mail hours ahead of the land routes.

The first year of the air mail resulted in the travel of 16,000 miles and the carrying of 713,240 letters. By 1927, after an increase each year, 2,329,553 miles were traveled and 22,285,000 letters were carried. At first mail was sent by zones similar to parcel post and charges made according to distance, later the charge became ten cents for each half ounce or fraction regardless of distance, and, within the last few months, this rate has been reduced to five cents for the first half ounce and ten cents for each additional half ounce. The cost to the government for carrying by the various flying companies, varies from 83 cents to $3.00 per pound according to the service rendered.

In addition to the criss-crossing of the nation, service began in October with the City of Mexico and only 22 hours are required to cover the distance from Chicago to the city of the neighboring republic. This is an extension of a route established only last February between Dallas and San Antonio, Texas.

The government is ready to ask for bids for carrying mail from Key West, Florida, to the Canal Zone. Stops will be made on this route in Havana, Cuba; Merida, Mexico; in Honduras; and Costa Rica.

Another route from Key West to Porto Rico includes Havana, several cities in Chile, and Haiti. For sometime routes have been operating between the States and Canada so that the whole of North and parts of South America are linked closer together, not only in a commercial way, but the ties of friendship have been more firmly fixed.

In five years all first class mail will be carried by aeroplane, according to W. Irving Glover, second assistant postmaster general, who is in charge of the air mail. The government has always used the most rapid means of getting mail to its destination and the air service is the fastest at the present time.

While steps are being taken at home to speed up the mail, there already is mention made of the possibility of foreign service. Postoffice officials believe that within ten years such service will be established and they are ready now to let contracts to any company or individual who demonstrates the ability to carry them out.