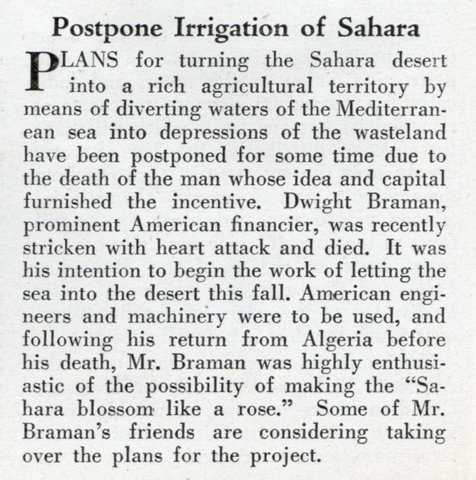 Postpone Irrigation of Sahara
PLANS for turning the Sahara desert into a rich agricultural territory by means of diverting waters of the Mediterranean sea into depressions of the wasteland have been postponed for some time due to the death of the man whose idea and capital furnished the incentive. Dwight Braman, prominent American financier, was recently stricken with heart attack and died. It was his intention to begin the work of letting the sea into the desert this fall. American engineers and machinery were to be used, and following his return from Algeria before his death, Mr. Braman was highly enthusiastic of the possibility of making the “Sahara blossom like a rose.” Some of Mr. Braman’s friends are considering taking over the plans for the project.