This one is very close to current milk cartons. The only difference I can see is that instead of being folded and stapled, the top of the container is heat bonded, allowing you to simply pull the sides apart instead of taring the overlap. 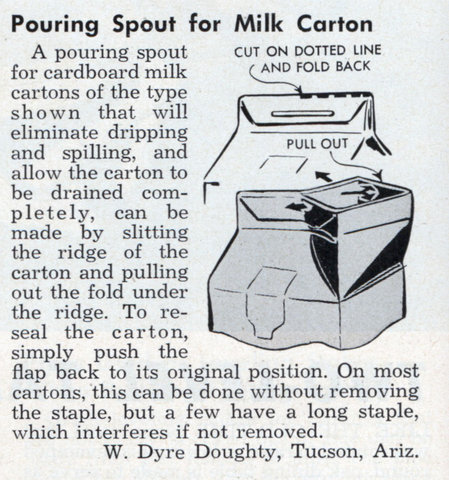 Pouring Spout for Milk Carton
A pouring spout for cardboard milk cartons of the type shown that will eliminate dripping and spilling, and allow the carton to be drained completely, can be made by slitting the ridge of the carton and pulling out the fold under the ridge. To re-seal the carton, simply push the flap back to its original position. On most cartons, this can be done without removing the staple, but a few have a long staple, which interferes if not removed.
W. Dyre Doughty, Tucson, Ariz.