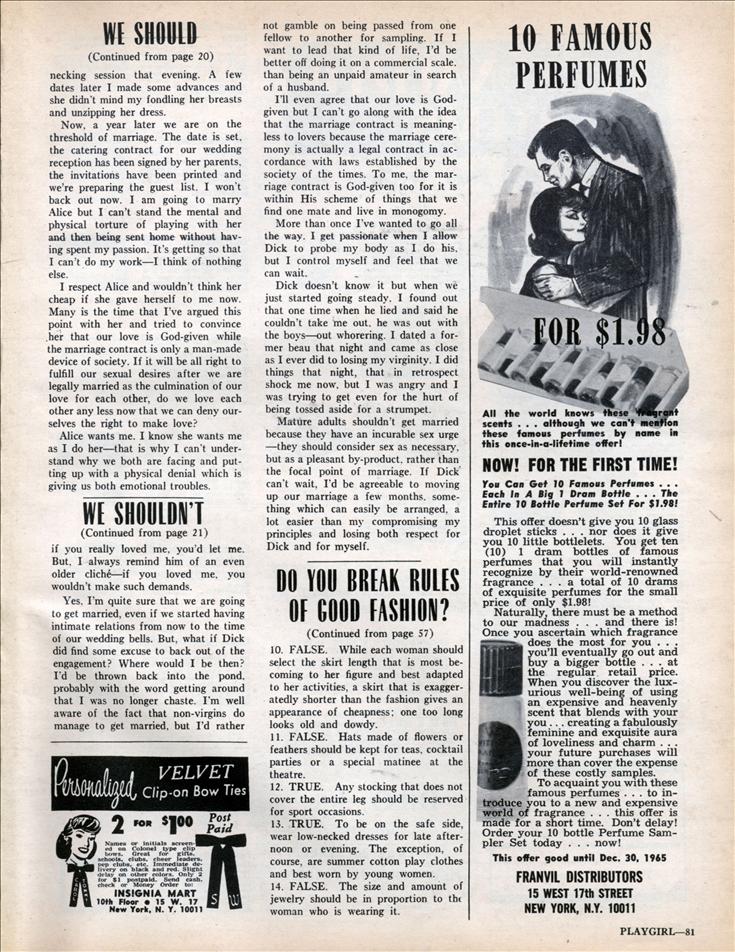 As told to SHIRLEY GUTTENTAG

He: To present my side of the argument it is necessary to start at the beginning. I first met Alice when her date at a party got drunk and I volunteered to drive her home. I didn’t see her again until I was invited to a party given by one of her friends—an invite I suspect was extended to me at Alice’s request. We had a few dates and I was always a gentleman—in fact the first time we kissed was on my birthday.

One summer evening we stopped off in a quiet spot after seeing an early movie and it was Alice who started the little necking session that evening. A few dates later I made some advances and she didn’t mind my fondling her breasts and unzipping her dress.

Now, a year later we are on the threshold of marriage. The date is set, the catering contract for our wedding reception has been signed by her parents, the invitations have been printed and we’re preparing the guest list. I won’t back out now. I am going to marry Alice but I can’t stand the mental and physical torture of playing with her and then being sent home without having spent my passion. It’s getting so that I can’t do my work—I think of nothing else.

I respect Alice and wouldn’t think her cheap if she gave herself to me now. Many is the time that I’ve argued this point with her and tried to convince her that our love is God-given while the marriage contract is only a man-made device of society. If it will be all right to fulfill our sexual desires after we are legally married as the culmination of our love for each other, do we love each other any less now that we can deny ourselves the right to make love?

Alice wants me. I know she wants me as I do her—that is why I can’t understand why we both are facing and putting up with a physical denial which is giving us both emotional troubles.

She: Dick is quite right when he intimates that I connived to see him again after he drove me home. His being a gentleman was a refreshing change from the other fellows in the crowd who thought that they were God’s gift to womanhood and that they had a right to paw us after free-loading at a party.

I liked Dick right from the start and “helped” him along when I saw that he was very bashful. O.K., so I let him make advances. I wasn’t ready to give myself, but I always heard from the girls that it helped snare a husband if you put out the right bait!

Dick resorts to the old cliche— if you really loved me, you’d let me. But, I always remind him of an even older cliche—if you loved me, you wouldn’t make such demands.

Yes, I’m quite sure that we are going to get married, even if we started having intimate relations from now to the time of our wedding bells. But. what if Dick did find some excuse to back out of the engagement? Where would I be then? I’d be thrown back into the pond, probably with the word getting around that I was no longer chaste. I’m well aware of the fact that non-virgins do manage to get married, but I’d rather not gamble on being passed from one fellow to another for sampling. If I want to lead that kind of life, I’d be better off doing it on a commercial scale, than being an unpaid amateur in search of a husband.

More than once I’ve wanted to go all the way. I get passionate when I allow Dick to probe my body as I do his. but I control myself and feel that we can wait.

Dick doesn’t know it but when we just started going steady. I found out that one time when he lied and said he couldn’t take me out. he was out with the boys—out whorering. I dated a former beau that night and came as close as I ever did to losing my virginity. I did things that night, that in retrospect shock me now, but I was angry and I was trying to get even for the hurt of being tossed aside for a strumpet.

Mature adults shouldn’t get married because they have an incurable sex urge —they should consider sex as necessary, but as a pleasant by-product, rather than the focal point of marriage. If Dick can’t wait, I’d be agreeable to moving up our marriage a few months, something which can easily be arranged, a lot easier than my compromising my principles and losing both respect for Dick and for myself.