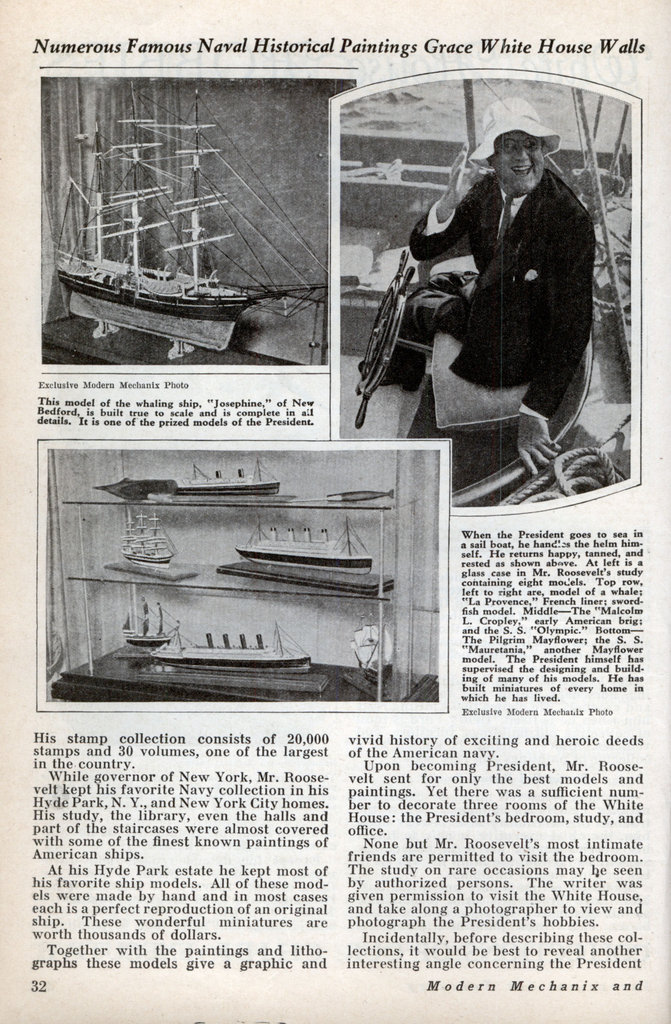 The clergyman, noted for his stamp collection, relaxed and excitedly replied that he would be delighted to come “whenever convenient for Mr. Roosevelt.”

This anecdote is just a sidelight in the life of the nation’s chief executive, but it adds to an understanding of the character of the President of the United States.

To understand great men thoroughly one should know their avocations, their hobbies, the diversions that occupy them in their leisure time.

The Prince of Wales, in addition to golfing, horseback riding, and dancing, knits and crochets. He claims that knitting rests him when he is tired. Henry Ford is fond of collecting old buildings, furniture, and vehicles. Andrew Mellon is known as a collector of paintings and rare books.

President Roosevelt might be called the nation’s leading hobbyist. When the troubles of the country bear heavily upon him, the chief executive is able to forget his worries among his great collections. Sometimes far into the night he will sit in bed pasting stamps in albums.

Stamp collecting is only one of his hobbies. Love for the sea seems to dominate all his pastimes. His collection of naval books, engravings, paintings, pamphlets and ship models is considered the finest in existence in private hands.

Except for official reports and documents, it is possibly superior to that in the Congressional Library. It consists of between 6,000 to 7,000 books, approximately 10,000 pamphlets, 450 framed lithographs -and etchings and more than 60 paintings.

His stamp collection consists of 20,000 stamps and 30 volumes, one of the largest in the country.

While governor of New York, Mr. Roosevelt kept his favorite Navy collection in his Hyde Park, N. Y., and New York City homes. His study, the library, even the halls and part of the staircases were almost covered with some of the finest known paintings of American ships.

At his Hyde Park estate he kept most of his favorite ship models. All of these models were made by hand and in most cases each is a perfect reproduction of an original ship. These wonderful miniatures are worth thousands of dollars.

Together with the paintings and lithographs these models give a graphic and vivid history of exciting and heroic deeds of the American navy.

Upon becoming President, Mr. Roosevelt sent for only the best models and paintings. Yet there was a sufficient number to decorate three rooms of the White House: the President’s bedroom, study, and office.

None but Mr. Roosevelt’s most intimate friends are permitted to visit the bedroom. The study on rare occasions may be seen by authorized persons. The writer was given permission to visit the White House, and take along a photographer to view and photograph the President’s hobbies.

Incidentally, before describing these collections, it would be best to reveal another interesting angle concerning the President and his avocations. The President’s mother revealed that, not only does he collect models, but that he also enjoys supervising the designing and building of models of both ships and houses.

Every house in which Mr. Roosevelt has lived has been reproduced, under his supervision, in a miniature model. The President himself, his friends say, has built many models of houses.

Shortly after his election as governor of New York, he personally constructed an ingenious little model of the governor’s mansion in Albany. He has also ingeniously built tiny models of cottages at the Warm Springs, Ga., sanitarium.

Returning to the White Houseâ€”just back of the President’s desk in his study is a remarkable group of paintings of early American ships, mostly men o’war. One is the famous original painting of the Constitution, by the noted American artist, Gordon Grant.

This is the painting that saved Old Ironsides, noted for her distinguished victories in the Revolutionary War and the War of 1812 from becoming a loss as a treasured historical ship. In 1925, it will be recalled, Congress authorized restoration of the Constitution, but appropriated no funds for the purpose.

To save the old ship it was decided to raise the money by private contributions through the sale of copies of the painting in Mr. Roosevelt’s possession. Approximately 4,500,000 school children contributed. In all $725,000 was raised and now the Constitution, completely restored, is paying her respects to cities on the Pacific coast.

Another famous painting in this group shows the loss of the Kearsarge, well known Union man o’war of the Civil War. She was one of the earliest of Uncle Sam’s steam war-sloops. The Kearsarge earned her place in American history by her victorious battle with the Confederate steamer, Alabama, off Cherbourg, France. The White House painting shows the famous ship some years later, sinking after being wrecked on Roncador Reef, in the Gulf of Mexico.

In the group of paintings and models above the fireplace in the President’s study, one painting in particular is outstanding, because it is understood to be his favorite. This is an original, a gift from the noted artist, Charles Ruttan, and shows the destroyer “U. S. S. Dyer,” as she looked fully camouflaged, arriving in the Azores. “The Dyer” was the vessel in which Mr. Roosevelt, then assistant secretary of the Navy, went to Europe during the World War, for an inspection tour.

On the mantelpiece of the fireplace is a model of the “Amberjack II.” This model was given to the President by a close friend and represents another favorite diversion of Mr. Roosevelt, sailing in the open sea.

The actual “Amberjack” is a 45 foot sea-going schooner, used by the President and his â€¢ sons, Franklin, Jr., and John, both under 20 years of age. Last summer after the strenuous campaign preceding his election and the first trying months of his administration, the President and his sons slipped away for a leisurely cruise up and down the New England coast. They did their own navigating and their own cooking. The President returned happy and cheerful, the picture of buoyant health and deeply tanned.

In a large glass case in the President’s study, next to a window overlooking the Washington monument, is an interesting assortment of eight models. Outstanding in the group are two models of the “Mayflower,” the historic ship that carried the Pilgrims to America. The models, it is said, are exact replicas of the seventeenth century sailing vessel.

Also in the case are models of a whale and a swordfish; “La Provence,” modern French liner; the “S. S. Olympic”; the “S. S.Mauretania”; and the “Malcolm L. Cropley,” an early American brig.

One of the latest additions to the President’s collection of paintings is an original showing the “Gertrude L. Thebaud,” the famous fishing smack that visited the World’s Fair in Chicago and won the North Atlantic supremacy in a thrilling race last summer. Ben Pine, noted Gloucester captain of the sailing vessel, presented the painting to the President.

Mr. Roosevelt stands well in the front rank of American stamp enthusiasts. He specializes in stamps of the West Indies, Central and South America. He has two volumes entirely dedicated to the Dominican Republic and a number of rare early Haiti stamps.

Actually, though, his interest in philately is general. He has a dozen volumes of general material as well as four volumes of miscellaneous “scrap items” of recent date. His United States stamps fill two volumes. Covers of different varieties and degrees of importance make up three volumes. In the last named group are envelopes from various celebrities, including high government officials, navy officers, diplomats and publicists.

Because of his association with the navy, Mr. Roosevelt is especially fond of naval postmarks and is constantly on the watch for Civil, Spanish, and World War cancellations of naval character. In 1918 the President was senior naval representative of the United States in Europe. This work brought him in touch with King George, the acknowledged dean of British philatelists, and the cares and troubles of the war were laid aside while conversation centered on their hobby.

The President began collecting stamps as a small boy. He said he might have dropped the hobby as he grew older, had it not been for an accidental find in an old trunk in the attic of his home where he discovered a package of letters written by his grandfather, Delano, while in the diplomatic service in China. The dates ranged from 1856 to 1870.

The find was a treasure. It included examples of the first stamps issued by Hongkong.

The President’s collection of lithographs is very treasured. Art authorities say that Mr. Roosevelt has some of the finest Currier and Ives lithographs in the United States today. These are quaint prints of ancient nautical scenes and clipper shipsâ€”prints that originally sold for not more than 50 cents apiece, but which now command hundreds of dollars each and sometimes a thousand dollars or more. The President was among the first to realize their historical value and started collecting them as a young man.

The term lithograph simply means a printing picture originally engraved on a flat stone. Since no photographs are available of the vanished sailing ships of old, colored lithographs are of great historic value and are always in demand.

On more than one occasion Mr. Roosevelt has been late for an appointment because he was lured into a print shop or an auction room seeking these old lithographs. While Governor of New York he once had an engagement with a very important official at four o’clock. Time passed. The official grew restless. Mr. Roosevelt arrived finally at five-fifteen with a couple of prints under his arm. He explained that he had seen some likely items in a print shop window, entered the shop, browsed, talked and lost all track of time. But he had found a print or two that he wanted. Rumor has it that the personage has now taken up collecting himself and is also late to important appointments occasionally.

During the past six months there has been no time for auctions and none for browsing. But even in these busy days the President’s personal secretary goes through all auction catalogues and mentions items that may be desirable.

These are the President’s hobbies. Although one of the hardest working officials in the country, he finds rest and pleasure with these diversions. Through them all runs the salt tang, the rolling waves, the brisk wind and the adventure of the sea. They are the outgrowth of a thwarted ambition of the boy Roosevelt, who wanted to be a sailor, but instead was sent to Harvard by his father. His avocations have become many and now place him at the head of American hobbyists.