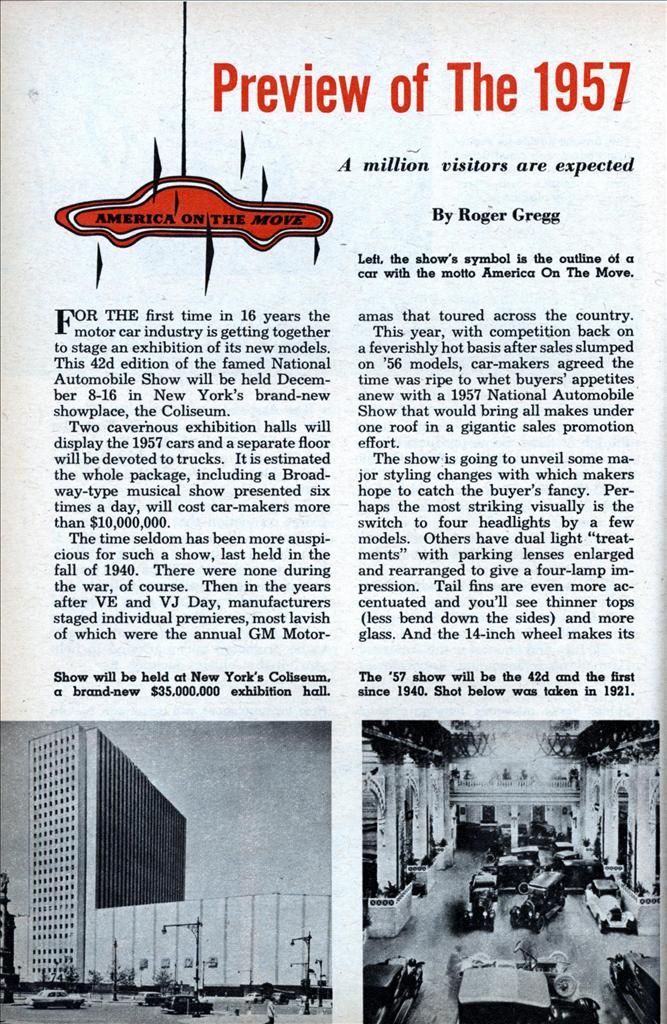 Preview of The 1957 National Automobile Show

A million visitors are expected to attend this $10,000,000 exhibition of new cars and trucks.

FOR THE first time in 16 years the motor car industry is getting together to stage an exhibition of its new models. This 42d edition of the famed National Automobile Show will be held December 8-16 in New York’s brand-new showplace, the Coliseum.

Two cavernous exhibition halls will display the 1957 cars and a separate floor will be devoted to trucks. It is estimated the whole package, including a Broadway-type musical show presented six times a day, will cost car-makers more than $10,000,000.

The time seldom has been more auspicious for such a show, last held in the fall of 1940. There were none during the war, of course. Then in the years after VE and VJ Day, manufacturers staged individual premieres, most lavish of which were the annual GM Motoramas that toured across the country.

This year, with competition back on a feverishly hot basis after sales slumped on ’56 models, car-makers agreed the time was ripe to whet buyers’ appetites anew with a 1957 National Automobile Show that would bring all makes under one roof in a gigantic sales promotion effort.

The show is going to unveil some major styling changes with which makers hope to catch the buyer’s fancy. Perhaps the most striking visually is the switch to four headlights by a few models. Others have dual light “treatments” with parking lenses enlarged and rearranged to give a four-lamp impression. Tail fins are even more accentuated and you’ll see thinner tops (less bend down the sides) and more glass. And the 14-inch wheel makes its appearance on a majority of the cars.

This model year may see a fade-out for the “longer-and-lower” pitch. Most ’57 machines are lower, which helps create a feeling that they’re longer, but actually lengths are about the same.

The industry’s biggest change is not going to be readily apparent to an average spectator. That is Chevrolet’s new fuel injection system, which offers faster acceleration, greater engine efficiency and other advantages.

Show time is likely to find the sales-division gang with a fine case of butterflies. They’ll have to fill out the price tags and virtually everyone in the industry agrees that a boost is certain for the new models.

New York City’s Coliseum, not yet a year old, is quite an attraction in itself. Decoration for the auto show will be at a minimum, with the directors relying on the beauty of the showrooms and the cars to please aesthetically-minded customers. Sculptures of the official show symbol will be found throughout the halls, however. The symbol is a gold linear outline of an auto emblazoned with the show’s theme, America On The Move, in red-orange letters, accented by seven turquoise triangles. Each booth will have its own motif, of course.

Eight years ago New York’s city fathers conceived the idea of a structure designed specifically for expositions and conventions and trade shows. The towering building at the southwest tip of Central Park opened last April 28 with an international car show, a photographic fair and a stamp exhibition. In the months since, the Coliseum has done well in living up to its billing as the exposition capital of the world.

Four exhibition floors contain nine acres of display area for anything from a canceled 3-cent stamp to a 17,000-lb. molding machine brought in for a plastics show. Offices occupy the 20-story tower connected to the exhibition section. The $35,000,000 structure presents the clean, straight face of modern architecture. There are no windows in the show halls but 46,000 fluorescent lamps make it daylight inside.

The Coliseum looks out on Columbus Circle, a small park centered on a high stone column. At the top stands a statue of an early-day travel expert, Christopher Columbus, perhaps watching the big doings out of the corner of his eye.

This location is one of the Coliseum’s best features. It sits virtually in the geographic center of Manhattan. Eighth Avenue and Broadway intersect at Columbus Circle and the exhibition building runs from 58th to 60th streets. Three subway systems and four major public bus lines converge on the building from all directions, all parts of the city.

In its long and hop-scotch history, the National Automobile Show has moved only twice. It all started back in 1900 when the year-old Automobile Club of America, swelling with membership, decided to do something spectacular and ended up sponsoring the first horseless carriage show in Madison Square Garden, then at Madison Avenue and 25th Street.

This first exhibition was the liveliest of any of the 41 shows to date. Around the edge of the Garden’s floor, decked out in pale green carpets, went a 1/8-mile wooden track for demonstration runs that included an obstacle course. Up on the roof of the Garden was a rickety 200-foot ramp for climbing and braking demonstrations that gave spectators—to say nothing of the daring drivers—a real thrill. At that historic show, steam carriages dominated among some 300 vehicles, followed closely by electrics. Gasoline jobs were a poor third in number of entries.

The ’03 show was under the auspices of the Automobile Manufacturers Association, which still is the sponsor. Later the show was moved to Grand Central Palace next to the railroad terminal of the same name. Now it has found its way to the Coliseum. But the purpose never changed: to show off proudly what new miracles the industry has wrought.

Some notable innovations have been introduced to the public at the exhibitions and several major trends first were noted at the National Show.

Back in ’03 a scribe of the times told of his surprise to find that this new vehicle had some character of its own and no longer looked like a buggy without a horse. Three years earlier it was evident that the old tiller was shuffling off to oblivion and a thing called a steering wheel was coming in. Later came four-wheel brakes, the planetary transmission, “operated with a hand lever,” the gear shift on the steering column and headlights faired into the fenders—all now hailed as “modern” automobile developments.

Shows of the 1930’s were noted for a certain lack of restraint after a ban against displaying anything non-automotive was erased. Car men huddled to discuss what people would like to look at along with autos. The answer was obvious. Out came bare knees, low-cut gowns, shapely lasses clad in not much doing playlets and dances around the cars, and even a lineup of “golden girls.” Some industry people figured they were lucky the war came because by 1941 crowds were ogling a nightgowned blonde going to bed in the back seat of a sedan—but no one was paying much attention to the car.

For this 42d automobile show, manufacturers are concentrating on cars. There’ll be no funny business in the displays. The association, however, has fielded a stage show that is billed as a musical spectacular. The revue will be presented by a company of singers and dancers, with each performance lasting 40 minutes. First show of the day begins at 2 p.m., with the rest spaced out until closing time.

That all effort is going into artful presentation of commercial merchandise is indicated by one of the show rules prohibiting futuristic or dream cars. Only production models can be shown, although some new lines may radiate a future-in-the-present atmosphere. One car, for instance, began life as a dream model last January but by show time will have become a production rig.

All but one of the 17 American-made cars will be in the show. The absentee is Packard, which recently went through a wringer of financial difficulties before tying up with the Curtiss-Wright Corporation for needed support.

For several weeks it was questionable whether there would be any 1957 Packard at all. Then, after the C-W agreement, Harold E. Churchill emerged as the new Studebaker-Packard chief and announced that a new model was on the way. He placed the introduction date in mid-January, too late for the National Show. So company officials decided to fill the exhibition areas assigned to both their car lines with Stude models.

Nine makes—Buick, Chevrolet, Dodge, Ford, Mercury, Nash, Oldsmobile, Plymouth and Studebaker—will be displayed on the 56,958-square-foot second floor of the Coliseum. The third floor of 48,182 square feet will have the other seven brands—Cadillac, Chrysler, Continental, De Soto, Hudson, Lincoln and Pontiac (plus the Packard space). Eleven truck makers will be represented on the first floor.

On the day the show makes its bow (Saturday, December 8) the doors will open to the public at noon. Opening time all other days will be 11 a.m., with closing-down time every night at 11. Admission prices are 90 cents for adults, 45 cents for children. •