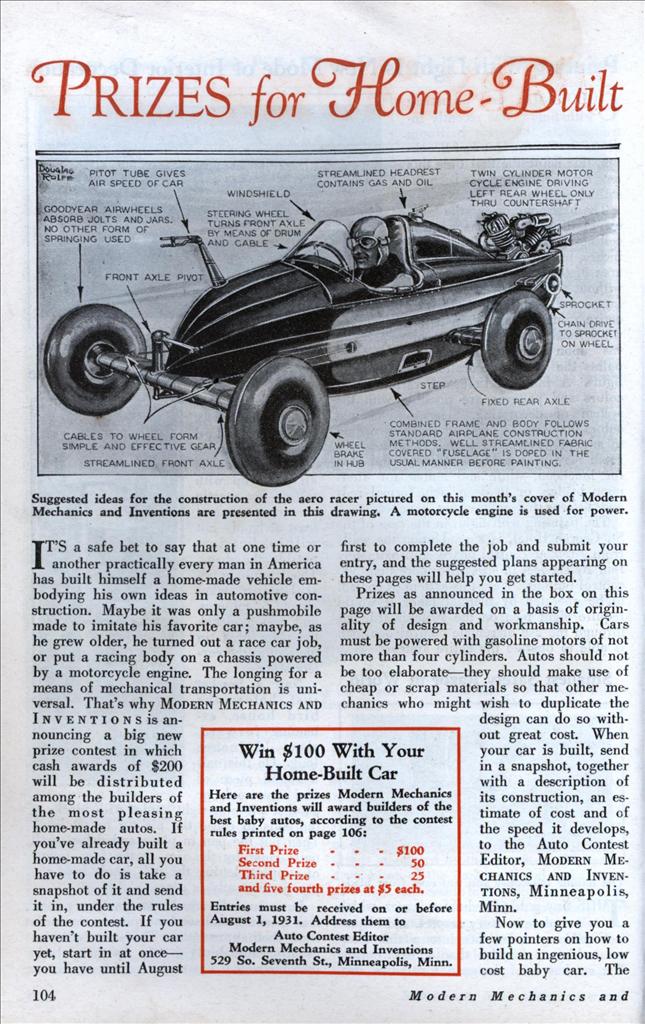 IT’S a safe bet to say that at one time or another practically every man in America has built himself a home-made vehicle embodying his own ideas in automotive construction. Maybe it was only a pushmobile made to imitate his favorite car; maybe, as he grew older, he turned out a race car job, or put a racing body on a chassis powered by a motorcycle engine. The longing for a means of mechanical transportation is universal. That’s why Modern Mechanics and Inventions is announcing a big new prize contest in which cash awards of $200 will be distributed among the builders of the most pleasing home-made autos. If you’ve already built a home-made car, all you have to do is take a snapshot of it and send it in, under the rules of the contest. If you haven’t built your car yet, start in at once— you have until August first to complete the job and submit your entry, and the suggested plans appearing on these pages will help you get started.

Prizes as announced in the box on this page will be awarded on a basis of originality of design and workmanship. Cars must be powered with gasoline motors of not more than four cylinders. Autos should not be too elaborate—they should make use of cheap or scrap materials so that other mechanics who might wish to duplicate the design can do so without great cost. When your car is built, send in a snapshot, together with a description of its construction, an estimate of cost and of the speed it develops, to the Auto Contest Editor, Modern Mechanics and Inventions, Minneapolis, Minn.

Now to give you a few pointers on how to build an ingenious, low cost baby car. The drawing on page 104, and on the cover of this magazine, illustrates an aero racer which makes use of the principles employed on some of the fastest airplanes. The body of the car is streamlined, the twin cylinder motorcycle engine mounted at the rear, turning the left rear wheel by a chain drive. Air wheels of the type employed on planes are used; these have the advantage of coming with brakes in the hub. They are practical for small cars, too—on another page of this magazine is an exclusive story announcing successful trials of this type of tires for use on trucks and buses. Soon they will be commonplace on passenger cars. The front axle is streamlined with a fairing and fixed to pivot in its center. Other suggested details of construction are given in the drawing. No dimensions are included, since it is intended to serve simply as an idea which you can modify or adapt in any way you see fit.

The drawing on page 105 shows another small car with a one-lung motorcycle engine, employing a different type of drive, a belt being used. This enables you to make use of an old style motorcycle engine in which the belt drive was popular. The wheels are motorcycle type, the front ones with brakes in hub. The left rear wheel requires the addition of a flanged pulley to accommodate the drive belt.

Steering gear consists of a wheel, a drum or bobbin, and a few feet of stranded steel cable. Four pulleys guide the cable from the drum to the front axle, as shown, so that the wheel winds and unwinds the cable around the drum and thus rotates the front axle on its central pivot.

Springing of the car is simple, an ordinary motorcycle spring being used for the front axle, and the rear one making use of airplane shock cord. The body frame follows airplane practice; it is really a fuselage. It can be covered with fabric, doped, or a plywood finish can be used.

Most motorcycle motors are equipped with kick starters, and with a little ingenuity you can arrange the starter so that it operates from a pedal in the cockpit.

These suggestions will no doubt bring a score of others to your mind—so get busy and send in your entry! Remember, it has until August first to reach us. There’s no reason why that $100 prize, or one of the smaller ones, shouldn’t go to you. In judging the winners, the car which shows the best results from the minimum of expense will rake in the prize money. Get going!