PROBING the SECRETS of HYPNOTISM (Jan, 1930) 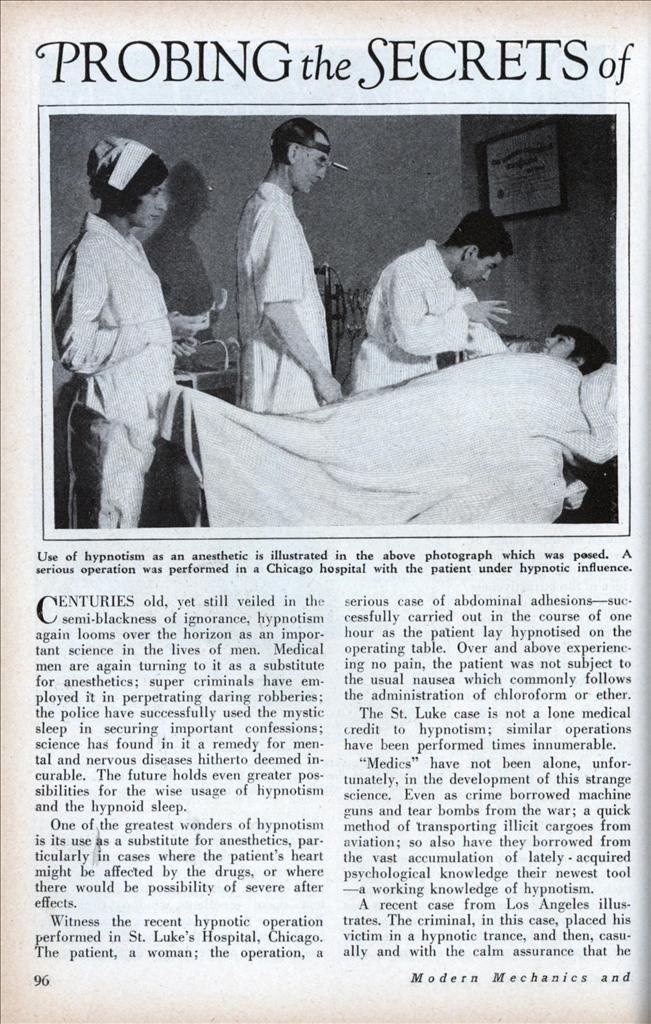 PROBING the 5ECRETS of HYPNOTISM

An article which reveals uses of mystic powers

CENTURIES old, yet still veiled in the J semi-blackness of ignorance, hypnotism again looms over the horizon as an important science in the lives of men. Medical men are again turning to it as a substitute for anesthetics; super criminals have employed it in perpetrating daring robberies: the police have successfully used the mystic sleep in securing important confessions; science has found in it a remedy for mental and nervous diseases hitherto deemed incurable. The future holds even greater possibilities for the wise usage of hypnotism and the hypnoid sleep.

One of the greatest wonders of hypnotism is its use a substitute for anesthetics, particularly in cases where the patient’s heart might be affected by the drugs, or where there would be possibility of severe after effects.

Witness the recent hypnotic operation performed in St. Luke’s Hospital, Chicago. The patient, a woman; the operation, a serious case of abdominal adhesions—successfully carried out in the course of one hour as the patient lay hypnotised on the operating table. Over and above experiencing no pain, the patient was not subject to the usual nausea which commonly follows the administration of chloroform or ether.

The St. Luke case is not a lone medical credit to hypnotism; similar operations have been performed times innumerable.

“Medics” have not been alone, unfortunately, in the development of this strange science. Even as crime borrowed machine guns and tear bombs from the war; a quick method of transporting illicit cargoes from aviation; so also have they borrowed from the vast accumulation of lately – acquired psychological knowledge their newest tool —a working knowledge of hypnotism.

A recent case from Los Angeles illustrates. The criminal, in this case, placed his victim in a hypnotic trance, and then, casually and with the calm assurance that he had all the time in the world, systematically rifled her apartment. So clever was he that the woman, on awaking three days later, could not remember the man or what he looked like!

She did remember, however, a little effect which the crook performed, half convincing her that the man really could waft her gently to Slumberland if he so desired. (The hypnotist banks on that for his first step towards inducing the hypnotic state, convincing the subject that he is about to be hypnotised.) The device he used was quite simple— merely a three-inch circle drawn on a sheet of white cardboard, with two lines crossing at right angles through the center. One line la labeled AB; the other, CD. By holding a small weight suspended from a string over the center of the arrangement, and thinking of the line AB, the weight will slowly begin to swing along the line AB. Changing the concentration to CD, the bob will change and swing in the opposite direction. Thinking of the circle will cause the bob to swing in a circle. All this occurs without any consciousness of an effort to make the pendulum swing. The motion of the hand, too slight to be perceptible, is caused by thought.

Science knows it as “Chrevruel’s pendulum.” The same outfit is also sold under various guises — as a “sex-indicator,” a “mystic charm,” etc.

The purpose which it served the crook was to enable him to convince his victim of the possibility of strange mental states, and at the same time to establish his authority. After thus subtly moulding the mind of his victim into a receptive state for the hypnotic sleep, the rest was simple—another crime, unsolved, unpunished.

But — it is a double-edged sword — this hypnotism! Dr. Langsner, marvelous hypnotist of Vienna, does and says things to worry the criminal. By hypnotism he caused a young criminal to confess after fifteen minutes the murder of his mother, sister and two hired men.

Dr. Langsner says everybody has a sixth sense that can be made to receive the thoughts of another. Thought is something like a broadcasting operation. He hypnotised the criminal and easily obtained the truth from him because “his crime is always on his mind.”

The learned doctor is not alone in this usage of hypnotism. Various crimes, locked tight in the hearts of men under the grilling of the customary “third degree,” have welled out coherently and intelligibly while the criminal was under the control of hypnotism. Of course, the matter of tricking a man into hypnotism is much more difficult than hypnotising a person who has freely surrendered his will to the hypnotist. Nevertheless, the field of hypnotism offers many new and startling angles to the criminologist; and if once developed to the state of even partial efficiency, it would do wonders in speeding justice and eliminating the bru- tal, behind locked doors, “third degree” now in vogue.

The power of suggestion which the hypnotist holds over the subject is so great as to be often ludicrous. A trick which has been used with considerable success by a man who is in no sense a hypnotist, consists in placing the man-about-to-be-hypnotised in a chair, with his arms folded and his feet slightly in advance of his body. The subject is half-convinced that he is about to be “put to sleep.” Really, however, the pseudo-hypnotist does nothing but go through an impressive ritual of passes and stares. The effect is surprising. On being told that he cannot rise from the chair, the subject will invariably find, that really, he cannot rise! The explanation of the trick is simple—with the arms folded and the feet placed as shown it is rather difficult to arise; suggestion does the rest!

Hypnotism by radio is comparatively new, inasmuch as radio itself is but in its infancy.

The procedure is much the same. The patient freely consents to the use of hypnotism. She is made as comfortable as possible, in close proximity to the loudspeaker over which will come the command, “sleep.”

All set! An attendant darkens the room slightly, and while the patient fixes her eyes” on the soft luminous glow from a partly-concealed light, the hypnotist’s voice comes soothingly and monotonously over 200 miles of ether—”sleep, sleep, sleep . . . think of a gently-drifting boat . . . think of gently drifting off to sleep.”

Not once does the subject remove her eyes from the light. Five minutes—ten minutes pass. Slowly and almost imperceptibly the subject’s eyes lose the luster of earthly thoughts, she seems to be dreaming.

An attendant draws eyelids over staring eyes. Another attendant stabs the bright sterile point of a needle into the patient’s arm. Not a quiver or response; all sensation has apparently vanished.

Comes again the voice over the air, now rasping in its sibilant bark.