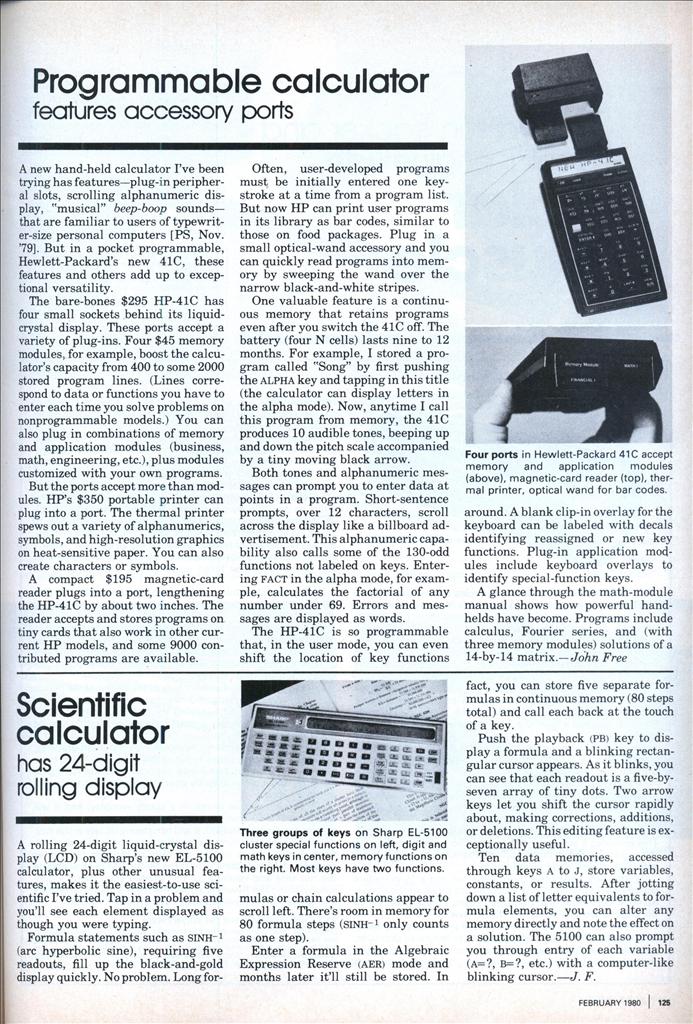 A new hand-held calculator I’ve been trying has features—plug-in peripheral slots, scrolling alphanumeric display, “musical” beep-boop sounds— that are familiar to users of typewriter-size personal computers [PS, Nov. ’79]. But in a pocket programmable, Hewlett-Packard’s new 41C, these features and others add up to exceptional versatility.

The bare-bones $295 HP-41C has four small sockets behind its liquid-crystal display. These ports accept a variety of plug-ins. Four $45 memory modules, for example, boost the calculator’s capacity from 400 to some 2000 stored program lines. (Lines correspond to data or functions you have to enter each time you solve problems on nonprogrammable models.) You can also plug in combinations of memory and application modules (business, math, engineering, etc.), plus modules customized with your own programs.

But the ports accept more than modules. HP’s $350 portable printer can plug into a port. The thermal printer spews out a variety of alphanumerics, symbols, and high-resolution graphics on heat-sensitive paper. You can also create characters or symbols.

A compact $195 magnetic-card reader plugs into a port, lengthening the HP-41C by about two inches. The reader accepts and stores programs on tiny cards that also work in other current HP models, and some 9000 contributed programs are available.

Often, user-developed programs must be initially entered one keystroke at a time from a program list. But now HP can print user programs in its library as bar codes, similar to those on food packages. Plug in a small optical-wand accessory and you can quickly read programs into memory by sweeping the wand over the narrow black-and-white stripes.

One valuable feature is a continuous memory that retains programs even after you switch the 41C off. The battery (four N cells) lasts nine to 12 months. For example, I stored a program called “Song” by first pushing the alpha key and tapping in this title (the calculator can display letters in the alpha mode). Now, anytime I call this program from memory, the 41C produces 10 audible tones, beeping up and down the pitch scale accompanied by a tiny moving black arrow.

Both tones and alphanumeric messages can prompt you to enter data at points in a program. Short-sentence prompts, over 12 characters, scroll across the display like a billboard advertisement. This alphanumeric capability also calls some of the 130-odd functions not labeled on keys. Entering fact in the alpha mode, for example, calculates the factorial of any number under 69. Errors and messages are displayed as words.

The HP-41C is so programmable that, in the user mode, you can even shift the location of key functions around. A blank clip-in overlay for the keyboard can be labeled with decals identifying reassigned or new key functions. Plug-in application modules include keyboard overlays to identify special-function keys.

A glance through the math-module manual shows how powerful hand-helds have become. Programs include calculus, Fourier series, and (with three memory modules) solutions of a 14-by-14 matrix.— John Free

A rolling 24-digit liquid-crystal display (LCD) on Sharp’s new EL-5100 calculator, plus other unusual features, makes it the easiest-to-use scientific I’ve tried. Tap in a problem and you’ll see each element displayed as though you were typing.

Formula statements such as sinh^-1 (arc hyperbolic sine), requiring five readouts, fill up the black-and-gold display quickly. No problem. Long for- mulas or chain calculations appear to scroll left. There’s room in memory for 80 formula steps (sinh^-1 only counts as one step).

Enter a formula in the Algebraic Expression Reserve (aer) mode and months later it’ll still be stored. In fact, you can store five separate formulas in continuous memory (80 steps total) and call each back at the touch of a key.

Push the playback (pb) key to display a formula and a blinking rectangular cursor appears. As it blinks, you can see that each readout is a five-by-seven array of tiny dots. Two arrow keys let you shift the cursor rapidly about, making corrections, additions, or deletions. This editing feature is exceptionally useful.

Ten data memories, accessed through keys a to j, store variables, constants, or results. After jotting down a list of letter equivalents to formula elements, you can alter any memory directly and note the effect on a solution. The 5100 can also prompt you through entry of each variable (a=?, b= ?, etc.) with a computer-like blinking cursor.—J. F.