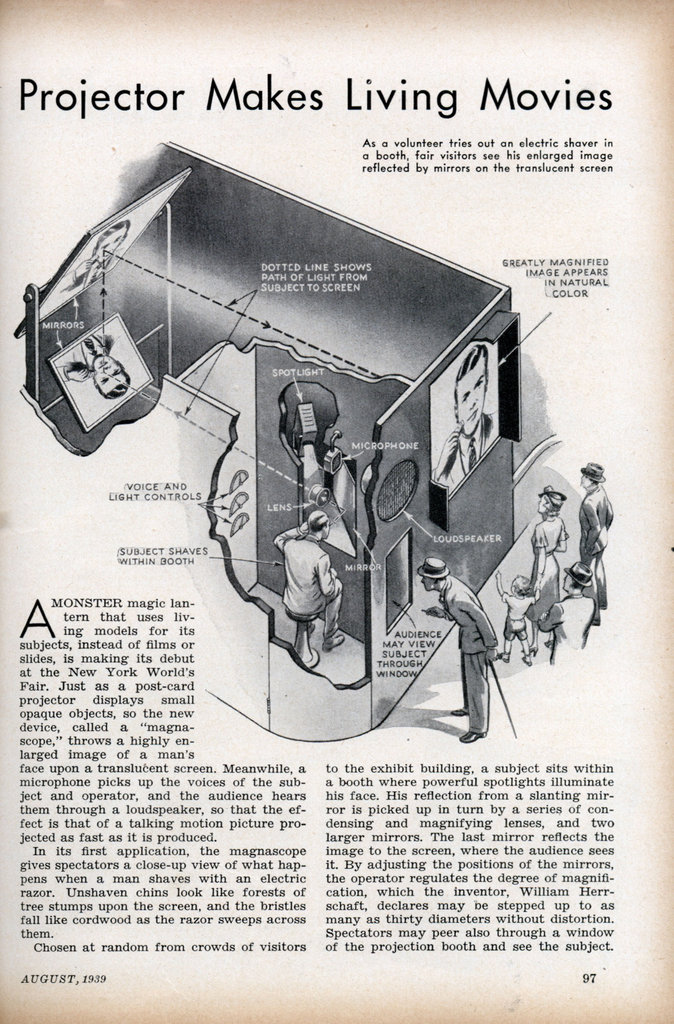 Projector Makes Living Movies
A MONSTER magic lantern that uses living models for its subjects, instead of films or slides, is making its debut at the New York World’s Fair. Just as a post-card projector displays small opaque objects, so the new device, called a “magna-scope,” throws a highly enlarged image of a man’s face upon a translucent screen. Meanwhile, a microphone picks up the voices of the subject and operator, and the audience hears them through a loudspeaker, so that the effect is that of a talking motion picture projected as fast as it is produced.

In its first application, the magnascope gives spectators a close-up view of what happens when a man shaves with an electric razor. Unshaven chins look like forests of tree stumps upon the screen, and the bristles fall like cordwood as the razor sweeps across them.

Chosen at random from crowds of visitors to the exhibit building, a subject sits within a booth where powerful spotlights illuminate his face. His reflection from a slanting mirror is picked up in turn by a series of condensing and magnifying lenses, and two larger mirrors. The last mirror reflects the image to the screen, where the audience sees it. By adjusting the positions of the mirrors, the operator regulates the degree of magnification, which the inventor, William Herr-schaft, declares may be stepped up to as many as thirty diameters without distortion. Spectators may peer also through a window of the projection booth and see the subject.