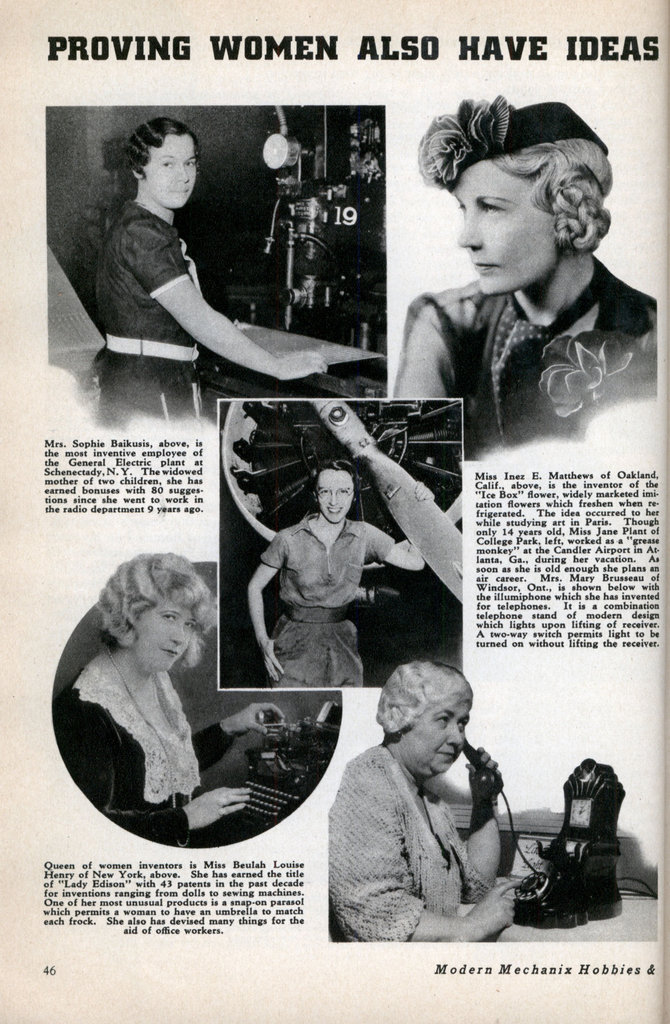 Mrs. Sophie Baikusis, above, is the most inventive employee of the General Electric plant at Schenectady, N. Y. The widowed mother of two children, she has earned bonuses with 80 suggestions since she went to work in the radio department 9 years ago.

Queen of women inventors is Miss Beulah Louise Henry of New York, above. She has earned the title of “Lady Edison” with 43 patents in the past decade for inventions ranging from dolls to sewing machines. One of her most unusual products is a snap-on parasol which permits a woman to have an umbrella to match each frock. She also has devised many things for the
aid of office workers.

Miss Inez E. Matthews of Oakland, Calif., above, is the inventor of the “Ice Box” flower, widely marketed imitation flowers which freshen when refrigerated. The idea occurred to her while studying art in Paris. Though only 14 years old, Miss Jane Plant of College Park, left, worked as a “grease monkey” at the Candler Airport in Atlanta, Ga., during her vacation. As soon as she is old enough she plans an air career. Mrs. Mary Brusseau of Windsor, Ont., is shown below with the illumiphone which she has invented for telephones. It is a combination telephone stand of modern design which lights upon lifting of receiver. A two-way switch permits light to be turned on without lifting the receiver.