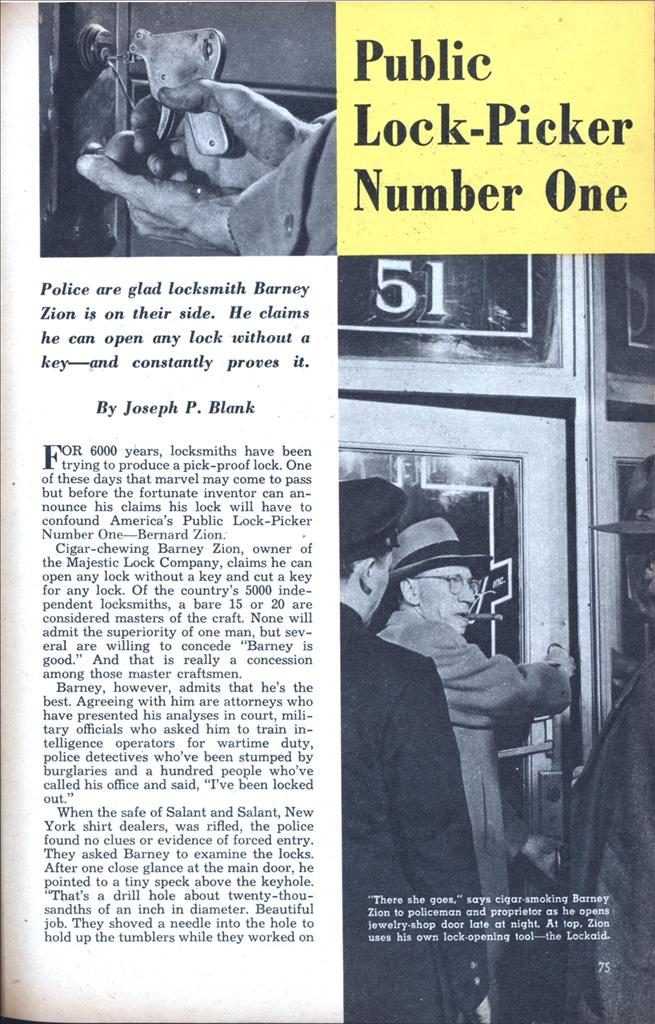 Police are glad locksmith Barney Zion is on their side. He claims he can open any lock without a key—and constantly proves it.

FOR 6000 years, locksmiths have been trying to produce a pick-proof lock. One of these days that marvel may come to pass but before the fortunate inventor can announce his claims his lock will have to confound America’s Public Lock-Picker Number One-—Bernard Zion.

Cigar-chewing Barney Zion, owner of the Majestic Lock Company, claims he can open any lock without a key and cut a key for any lock. Of the country’s 5000 independent locksmiths, a bare 15 or 20 are considered masters of the craft. None will admit the superiority of one man, but several are willing to concede “Barney is good.” And that is really a concession among those master craftsmen.

Barney, however, admits that he’s the best. Agreeing with him are attorneys who have presented his analyses in court, military officials who asked him to train intelligence operators for wartime duty, police detectives who’ve been stumped by burglaries and a hundred people who’ve called his office and said, “I’ve been locked out.”

When the safe of Salant and Salant, New York shirt dealers, was rifled, the police found no clues or evidence of forced entry. They asked Barney to examine the locks. After one close glance at the main door, he pointed to a tiny speck above the keyhole. “That’s a drill hole about twenty-thousandths of an inch in diameter. Beautiful job. They shoved a needle into the hole to hold up the tumblers while they worked on the lock through the keyhole,” Barney said.

The cleverly-jimmied lock bore the same workmanship of several other robberies and the police soon caught up with Fred and William McLaren who confessed to a long series of “beautiful jobs.”

In conjunction with the New York Police Safe and Loft Squad, Barney has worked with police detectives from all parts of the country. His latest case developed out of a bunch of keys found in the pocket of a criminal suspect. The Florida police wanted the keys identified. Barney labeled each one—a master key for a hotel using a specific brand of lock, a house key, a car key and many others. With these leads, the police linked the suspect to definite robberies.

On the occasions when he receives an evening telephone call from a business-house or jewelry shop and a voice says, “I’m locked out and I need help,” he goes to the address, accompanied by Detective William Fife, acting the role of locksmith’s assistant. Fife asks for identification and credentials, and makes certain that a thief isn’t pulling a clever trick.

The ability to recognize the use of any key shown him also guards Barney from playing unwitting accomplice in a robbery. Unless positive about the customer’s credentials he refuses to duplicate master-keys or keys for a safe-deposit box, cash register, hotel room, public locker or post office box.

Although his work with police is marked by the drama of a mystery thriller, it is no more interesting to him than the problem of devising a super master-key for a hotel owner who wanted his key to open every lock in the hotel, but, at the same time, insisted that no key but his own fit the lock to his suite.

One day an executive of a large New York bank telephoned and asked Barney if he could unlock a box. The job had to be done in the bank with certain witnesses present. Barney said he’d try, tossed a few blank keys and a file into his coat pocket and taxied to the bank. In the conference room he saw a beautiful satin-wood box surrounded by a half dozen lawyers.

The box, part of an estate that was being contested, contained unknown valuables and no one knew the whereabouts of the key. After examining the keyhole, Barney selected a blank key and spent five minutes filing indentations. Into the lock slid the key—an easy turn to the right and Barney raised the lid to reveal $27,000 worth of solid 24-karat gold table service.

The seeming wizardry of his lock knowledge is sensational to onlookers. Recently, an actor entertained the notion that he was Houdini’s successor until he clapped a pair of handcuffs on his wrist one evening and found he couldn’t extricate himself, not even with the key. Using a three-inch piece of wire, Barney opened the cuffs in two minutes flat.

This accomplishment doesn’t quite measure up to the performance in the records room of the New York Board of Education where the Board chairman scoffed at the idea that the lock safeguarding valuable records could be opened with anything but the single key in his possession. Casually, Barney borrowed a hairpin, then probed the lock for a few minutes. It opened with a soft click. “It was the first time I’d ever tried that,” he admits. “Never was more surprised in my life.”

Locks, he explains, are composed of dozens of parts, each dependent on the others. No matter how mechanically perfect the construction, there’s always a weak spot. It’s this flaw, unknown to laymen, that provides the magic key.

Barney entered the lock business by climbing the back fence. Until 1930 he had been a salesman for General Service Corporation and two lock manufacturers. While selling key-cutting machines around the country, he discovered the faults of the trade. So, he went into business to help correct them. Knowledge of keys was haphazard, because no schools or technical books existed. The publication of the latter is discouraged by the police on the grounds that such information would supply petty thieves with interesting homework. Furthermore, equipment for cutting keys and re- pairing locks was inadequate. By 1935 he had patented the Lockaid, a lock-opening tool shaped like a child’s toy pistol, but with a thin, steel pin in place of the barrel. By pulling the trigger, the pin flicks the tumblers into opening position. The tool is sold only to police and licensed locksmiths, and each sale is registered.

Barney then turned to key-cutting machinery and perfected several devices that made the work of the locksmith more accurate and less difficult. But his greatest contribution to the trade has been his code books. Each lock has a serial number which refers to the code number of the key. The code number indicates the shape of the key and the variations of its grooves. These code books, held sacred by all manufacturers, are inaccessible to outsiders.

Before Zion went to work, if a locksmith failed to have a specific key for a lock on hand —as happened 99 times out of a 100—he could obtain it only by sending the serial number of the lock to the manufacturer or by the lengthy, complicated process of taking the lock apart and improvising a key. To overcome this handicap Barney collected the keys of all manufacturers, set up his own code books and made them available to all locksmiths.

Today, he is working on a plan for key insurance for automobile owners. If the idea is blessed by automobile manufacturers, a car owner will be able to replace a lost ignition key merely by visiting the shop of any locksmith anywhere in the United States.

A few years ago, former Secretary of War Robert P. Patterson asked Barney to make a master key for his country house, town apartment and garages. Instead of carrying a dozen keys, the Secretary wanted a single key to open all doors. Barney surveyed the problem, then regretfully shook his head. The locks were constructed on different principles, making a master key impossible. As far as Barney now knows, Mr. Patterson is still totin’ a bunch of keys.

Barney’s youngest son, eight-year-old Wesley Roger, is gifted with the same precocious talent. The cash box in the Zion office is governed by a combination lock and although never given the combination, the boy can open it with little effort.

Zion explains, “We’ve changed the combination a hundred times, but he’s been able to open that lock ever since he was three.” He beamed with pride, then tenderly warned Wesley Roger not to perform the trick in the presence of strangers. They might get the wrong impression. •