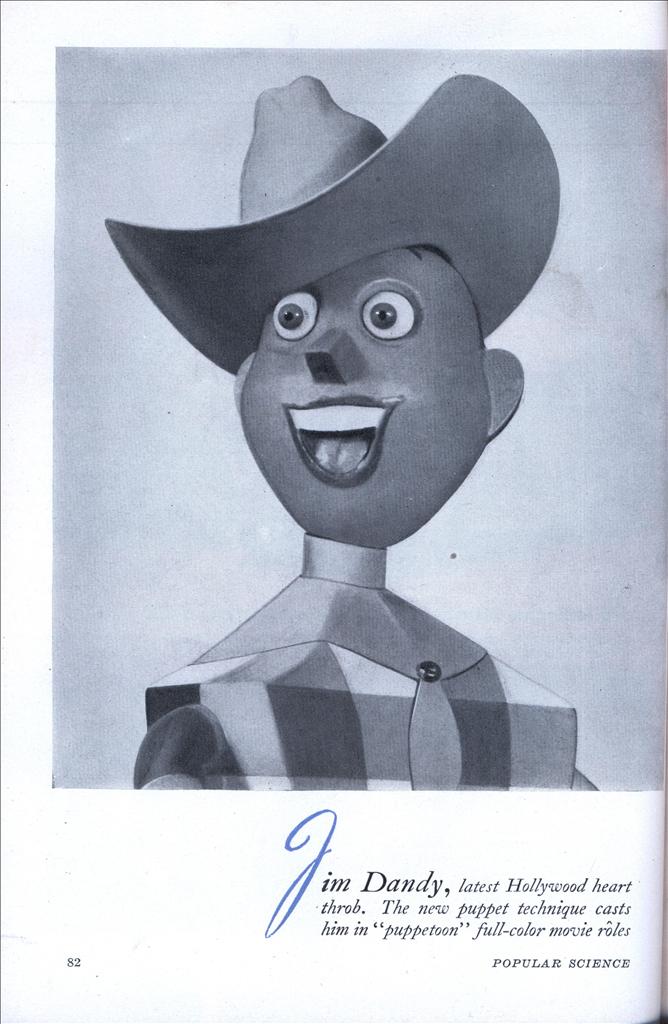 ACHIEVING a third-dimensional effect by combining puppets with actual sets. George Pal, 32-year-old Hungarian, has brought to America a new form of movie presentation. First of his color cartoons reached the screen recently as a nine-minute show.

Instead of drawings, Pal uses wooden characters which perform on tiny sets, with synchronized music, songs, and special effects. Although the actors are puppets, there are no strings; for no Pal puppet ever moves. Instead, the artist places on the set a complete stationary figure for each phase of a movement. When the heroine makes eyes at the hero, 28 individual heads are fitted, one after another, onto her body, the first showing her eyes wide open, the last with them closed.

First step in preparing a “pup-petoon,” the word being derived from puppet and cartoon, is the writing of the script, followed by composition of the music in order that movements of the characters may be properly timed, and designing of the sets. Pal then makes color drawings of the first, middle, and last phases of each movement, while assistants complete 25 or more intermediate drawings.

From these rough cartoons, the puppets are built. Finally, they take their places on the tiny sets, which may be a miniature railroad, or a model of a mountainous mesa against a painted cloud background. Frame by frame, each puppet takes a new position, or his head and hands are changed.

Pal was a successful cartoonist in Berlin seven years ago, and in 1935 formed his own studio to experiment with the puppet-cartoon idea. Later he produced similar pictures in Holland. Trained to be an architect, he is applying at his Hollywood studio principles learned in that profession.