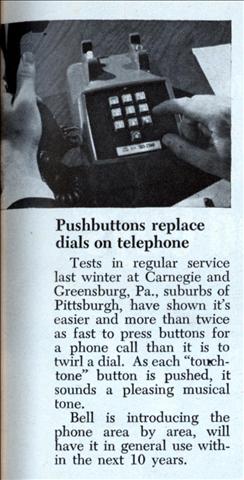 Tests in regular service last winter at Carnegie and Greensburg, Pa., suburbs of Pittsburgh, have shown it’s easier and more than twice as fast to press buttons for a phone call than it is to twirl a dial. As each “touch-tone” button is pushed, it sounds a pleasing musical tone.

Bell is introducing the phone area by area, will nave it in general use within the next 10 years.