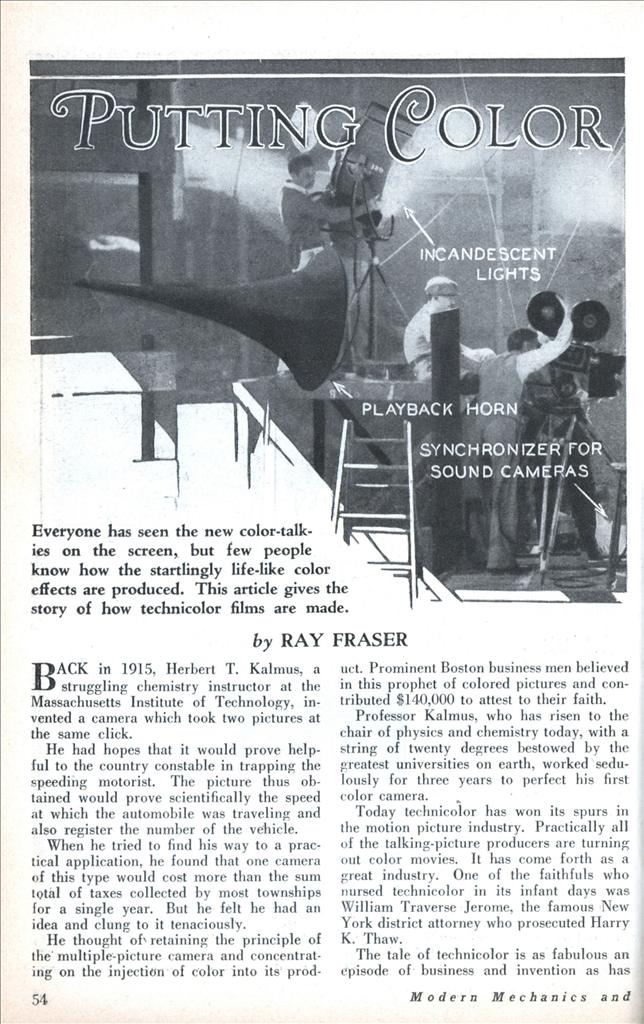 Putting Color Into the Movies

Everyone has seen the new color-talkies on the screen, but few people know how the startlingly life-like color effects are produced. This article gives the story of how technicolor films are made.

BACK in 1915, Herbert T. Kalmus, a struggling chemistry instructor at the Massachusetts Institute of Technology, invented a camera which took two pictures at the same click.

He had hopes that it would prove helpful to the country constable in trapping the speeding motorist. The picture thus obtained would prove scientifically the speed at which the automobile was traveling and also register the number of the vehicle.

When he tried to find his way to a practical application, he found that one camera of this type would cost more than the sum total of taxes collected by most townships for a single year. But he felt he had an idea and clung to it tenaciously.

He thought of retaining the principle of the multiple-picture camera and concentrating on the injection of color into its prod- uct. Prominent Boston business men believed in this prophet of colored pictures and contributed $140,000 to attest to their faith.

Professor Kalmus, who has risen to the chair of physics and chemistry today, with a string of twenty degrees bestowed by the greatest universities on earth, worked sedulously for three years to perfect his first color camera.

Today technicolor has won its spurs in the motion picture industry. Practically all of the talking-picture producers are turning out color movies. It has come forth as a great industry. One of the faithfuls who nursed technicolor in its infant days was William Traverse Jerome, the famous New York district attorney who prosecuted Harry K. Thaw.

The tale of technicolor is as fabulous an episode of business and invention as has ever risen on the modern horizon, bringing millions not only to the engineers who have perfected the color talking-pictures, but also to those who followed its course through dim and uncertain days.

The swiftness with which producers are turning to color is revealed by the annual financial report of the Technicolor Corporation, which has a monopoly of the natural color process used in making this type of picture. The statement issued last February disclosed that the corporation earned a net profit before taxation of $1,173,980 during 1929. The previous year showed a deficit of $46,190.

This may be fairly taken as an indication of the growing popularity of color movies. Eight months ago, “On With the Show,” the first all-color talking and singing picture, started the march to color. The officials of Technicolor announce that this year more than 100 pictures will be made in color, in whole or in part.

Some idea of the vast success of this industry may be obtained from the fact that in addition to its profits for last year, the Technicolor Corporation was enabled to pay off its notes amounting to $750,000.

At this point it is appropriate, I think, to introduce to you the president of this Technicolor industry which has struck a rich gold vein. He is none other than Prof. Kalmus, the once obscure inventor.

How is it done?

What brings this added beauty to the screen? How is the absolutely accurate reproduction of a person’s complexion, tint of hair, and physical magnetism reproduced in natural hues?

All those are natural questions arising in one’s mind as one observes the film industry stampeding pell-mell into the color-talkies. This is not, of course, intended to be a blatant puff for the Technicolor Corporation, but it is the truth that every great motion picture producer in this country today is using the process with the exception of one.

Technicolor is not entirely a photographic process. In fact, after the negative has been exposed, it almost ceases to be photography at all and becomes something like a lithographic process, except that the colors are not put on by a heavy impression as in the printing of a colored plate on paper, nor as they are laid on in the making of a lithograph.

They are put on the film by what is called the imbibition process. In other words, the emulsion on the film imbibes or drinks in the colors, which are in the form of liquid dyes when applied.

To begin at the start, a technicolor negative differs very little from the ordinary motion picture negative film, except for some necessary chemical treatment added to the usual photographic emulsion. Otherwise, it is the same as the negative used in black and white photography.

It is twice as long, however, because while in photographing a black and white scene only one frame of negative is exposed at a given instant of time. In technicolor two frames are exposed simultaneously.

The reason for this double length is that behind the lens in the technicolor camera, there is a prism which splits the scene into two images, each identical with the other.

One imageâ€”or sceneâ€”reaches the negative through a red filter. The other reaches the complementary bit of negative which is being exposed at the same instant through a green filter.

Thus there are on the negative two images, one right side up, the other bottom side up, the top lines being parallel with each other.

Now, to follow the operations necessary to get the positive of this double negative printed on one side of a strip of film so that it may be presented to the eye on a motion picture screen remains to be achieved, and I shall explain this process next.

First, a positive film, somewhat hardened by chemical action, is treated with hot water; then a green etching, or relief map of the scene, is recorded upon it. Next, a red relief map is obtained by the same method on another positive film, which, of course, has been exposed to the red part of the negative.

The red side is more in the nature of an orange-red, while the green side is more of a blue-green. Incidentally, it cost the group of inventors exactly $2,000,000 to get this color system in harmonious working order.

Now we come to the two relief map films. They are the matrices from which are to be made the hundred or more prints required for distribution to the theatres. With these two matrices ready, a black celluloid ribbon, which later is to become the film to be exhibited in the theatre, is treated with gelatine so that it readily will accept color dyes in liquid form.

Then the positive which bears the outlines, or microscopic hills and valleys, of the red matrix is brought in, soaked with a requisite amount of dye and applied like a master printing plate to this blank strip of gelatine-coated celluloid.

During this operation of transferring dye from the matrix to the blank celluloid, both the matrix and blank are rigidly mounted on metal backings. The result is that the red parts of the image, or scene, are impressed or printed on the gelatine-coated celluloid film and the latter drinks in from the red matrix all the color necessary to furnish the gradations of red required in the picture.

Processing the Positive The same process is repeated with that strip of positive film which has been exposed to the green portions of the negative; that is, a green matrix is made from it in the same manner that the red one was made. This green matrix is later soaked with dye of a greenish cast and laid on the gelatine-coated strip of celluloid directly over the color which already has been imbibed from the red imageâ€”or scene.

Through this second application the gelatine coating now drinks in from the green matrix all the color necessary to furnish the required gradations or shades of green. Thus the gelatine layer is inter-penetrated with both dyesâ€”red and greenâ€”in exactly the same proportions that those colors with their varying shades existed in the scene as originally photographed.

When this has all been done, these colors are “set” on the film and the result is a motion picture with every one of its many and diversified scenes all recorded in natural colors on one side of the film and ready for showing in a theatre.

Because of the perfection of this process of putting the color all on one side of the film, theatre projection-machine operators are able to run a film in technicolor exactly the same as a black and white picture. No special appliance or any adjustment of the projection-machine is required.

Before the difficult problem of getting the color all on one side of the film had been successfully solved, technicolor was printed on both sides of double-coated film. This i was thicker than ordinary film and operators in the theatre often failed to make the proper adjustment for the free passage of this double-coated film through their projection-machines. This resulted in the picture being out of focus sometimes. At other times blurred streaks were reproduced.

The finishing touches are being put on a new $1,000,000 technicolor plant in Hollywood, which will supplement two other laboratories in that movie colony and the two in Boston. In conclusion, I have found that each one of the faithfuls who pitched in for that original sink-or-swim fund of $140,000 has ridden the crest of the waves into the millionaire class today.