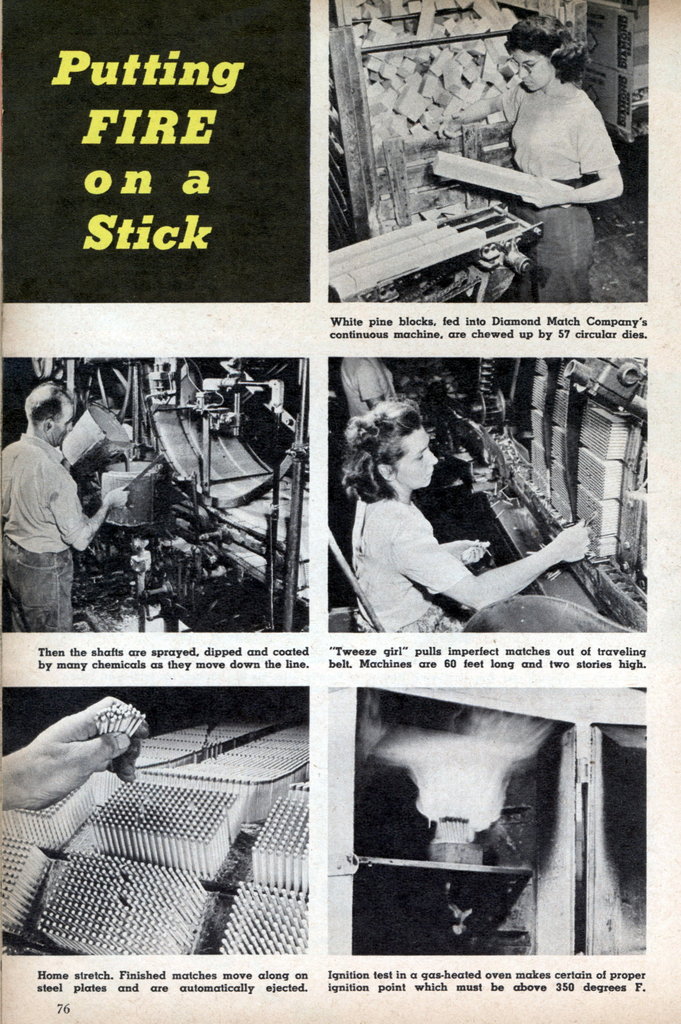 Putting Fire on a Stick

MATCHES first sparked onto the scene back in the 1600’s when a German alchemist set out to brew himself a pot of gold and came up with a pot of phosphorus.

It wasn’t long until boxes of matches were developed. The first ones were long sulphur-tipped splints which ignited when drawn through the folds of phosphorus-coated paper. There was a slight hitch, thoughâ€”since phosphorus cost $250 an ounce, it was cheaper to use dollar bills!
“Lucifer” was what they called the first friction match, tipped with antimony sulphide and potassium chlorate. It was appropriately named, too, for it sparked like hell and smelled like the very devil.

Then came the “Drunkard’s Match,” chemically treated so that it couldn’t burn past its midpoint. No matter how lit up you might be, your fingers wouldn’t be ignited.

Yes, matches were very dangerous objects in the old days. It wasn’t till 1911 that William A. Fairbum adapted sesquisulfide of phosphorus to provide for our present-day type of non-poisonous match-head.

Now for some figures: last year this country consumed about 520 billion matches. Of these, 200 billion were given away free, a practice known in no other country. As a result, each American uses about 14 matches a day at a per capita cost of six-tenths of one cent a week!