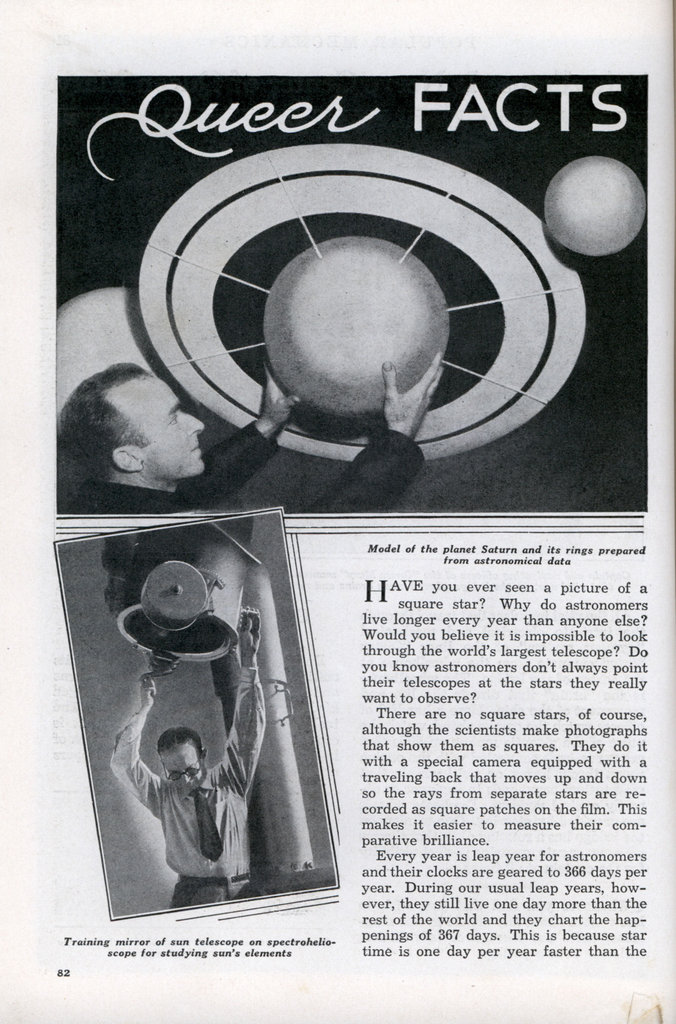 HAVE you ever seen a picture of a square star? Why do astronomers live longer every year than anyone else? Would you believe it is impossible to look through the world’s largest telescope? Do you know astronomers don’t always point their telescopes at the stars they really want to observe?

There are no square stars, of course, although the scientists make photographs that show them as squares. They do it with a special camera equipped with a traveling back that moves up and down so the rays from separate stars are recorded as square patches on the film. This makes it easier to measure their comparative brilliance.

Every year is leap year for astronomers and their clocks are geared to 366 days per year. During our usual leap years, however, they still live one day more than the rest of the world and they chart the happenings of 367 days. This is because star time is one day per year faster than the solar calendar. No one has ever looked through the 100-inch Hooker telescope on Mount Wilson and no one ever will because this instrument consists of a curved mirror instead of a series of transparent lenses. The mirror collects the light of the stars and throws it back to a point part way up the tube. From there it is reflected outside the tube by a small diagonal mirror. So instead of peering through the end of the telescope an observer stands alongside it and looks into it.

However, it will sometimes be possible to look through the 200-inch “titan of telescopes” being built for the California Institute of Technology because the mirror for this mighty instrument has a small hole in its center through which the collected light may be reflected. Usually, though, the observer will sit in a small house at the top of the telescope and look down into it toward the mirror.

The mirror glass of large telescopes doesn’t need to be transparent. In fact, no one would complain if the glass was as black as coal. This is because the mirror surface is placed on the front of the glass instead of at the back. Large telescope mirrors are tremendously expensive even though the glass costs only a few cents per pound. The difficulty is to pour it in a large unit without faults or cracks. Glass is used instead of metal because this material is not affected so much by changes in temperature and because it can be ground and polished to exactly the right shape. The latest thing is not to silver the mirrors at all but to coat them with an aluminum surface. Aluminum lasts longer without tarnishing than silver and is a better reflector of some wave lengths of light.

Due to the refraction in the world’s atmosphere astronomers rarely point their telescopes toward the true position of a star. Instead they point at the star image they see in the air. At the horizon this offset amounts to about thirty-three minutes of arc, approximately the diameter of the moon. In order to study the light of a certain star astronomers sometimes must actually point the telescope at the real position of a neighboring star. Nearly everything

about the stars is beyond the grasp of most of us. For example, a ball of fire only an inch in diameter taken from the sun’s surface would shine with a brilliance of 1,000,000 candlepower. One of the largest stars is Antares, whose diameter is 350 times that of our sun although it has a density only one-ten-thousandths of our own atmosphere. On the other end of the scale is a recently discovered dwarf whose diameter is only half the radius of the earth. But the density of this pygmy is 36,000,000 times that of water and its matter weighs 620 tons per cubic inch. On this star the head of a match would be considerably heavier than an automobile on earth. On its surface the gravitational pull is about 3,000,000 times that on the earth. Its surface temperature of 28,000 degrees is much higher than that of the sun.

When astronomers want a new instrument they have to invent it and build it. One instrument they build may weigh hundreds of tons and the next may be of microscopic proportions. Each must be sensitive beyond all ordinary requirements. The new 200-inch telescope will be so powerful, scientists estimate, that except for the curvature of the earth, you could stand on the Atlantic coast and with it read the name of a steamer in the Pacific. As an auxiliary instrument, Dr. Joel Stebbins has built a photoelectric cell and amplifier which, used with the large telescope, might be capable of detecting a candle flame 12,000 miles away. When the astronomers at Mount Wilson first wanted to take the temperature of the stars they decided that a tiny thermocouple, if it could be made small enough, would work.

“The cell had to be so sensitive it would register the heat from a single dim star,” says Alfred H. Joy, secretary of the observatory. “Two astronomers worked for months hunting for the best materials and finally decided on a tiny bismuth plate in contact with a small plate of tin and bismuth alloy. The cell was so small they built it under a microscope. Each element of the thermocouple is half a millimeter in diameter, about .01963 of an inch, and is one-one-hundredth of a millimeter thick.

The whole mass weighs one-thirtieth of a milligram. The electrical leads consist of almost microscopic platinum wires.” Another useful instrument is the spectrograph. Attached to a large telescope, it separates the light from an individual star into a colored spectrum and this band of light rays allows astronomers to calculate such things as the elements in a star’s atmosphere, its velocity in line of sight, and in some cases its distance from the earth. Indirectly they are able to calculate its rotation and the materials of its interior.

One interesting use for the spectrograph has been to determine what the earth would look like if viewed from another planet. The conclusion is that an observer would be able to make out the polar ice caps, the outlines of the seas, and the major cloud masses. A green tinge would prevail in the temperate and torrid zones and the large desert areas would appear reddish. This knowledge was gained by using the moon as a mirror, studying the spectrum of earthshine as it is reflected in the feebly lit portion of the new moon inside the bright crescent.

“Incidentally, we were able to establish once and for all that the atmosphere of Mars contains no measurable amounts of oxygen,” says Mr. Joy. “Spectra of Mars contain no oxygen lines. The spectrum of earthshine indicated oxygen to the amount that we know exists in the earth’s atmosphere, and this proved the accuracy of spectrographic analysis.”

Long-exposure photography has opened up tremendous distances in space and now astronomers are studying pictures of stars no one will ever be able to see directly, even if telescopes many times more powerful than the best we have now are built. The most distant stars that have been photographed are so far away that even the light-year, about six trillion miles, has grown too short to be a convenient measuring stick. A few years ago the astronomers had to invent the parsec, equal to three and a quarter light-years. Now it is becoming unhandy and the kilo-parsec, 1,000 times as long, has been adopted as the largest unit of distance.

Instead of studying the stars directly, astronomers make most of their calculations from photographs. Ninety per cent of their work is done in quiet laboratories instead of at the eyepieces of telescopes. Making a stellar photograph is long, tedious work because some of the stars are so faint that exposures lasting as long as twenty hours must often be made. On Mount Wilson when a photograph of a star is to be made, the 100-inch telescope is “hitched” to the star by a driving clock that turns the 100-ton instrument at the same speed as sidereal time. For hour after hour the clock keeps the mighty telescope pointed directly at the star image as it moves across the sky.

Even on a night when the “seeing” is good the star never stands still. Heat waves in the atmosphere always cause some motion. In the telescope the customary twinkle of a star is transformed into a slow swaying motion. The telescope is too huge to follow these gyrations so the astronomers move the photographic plate instead. The observer’s eyepiece contains cross wires and the astronomer moves control wheels so as to keep a target star exactly on the cross of the wires. Every second or so he makes an adjustment of a few thousandths of an inch, moving the film to the left or right or up or down to follow the star. He stays at his post until the exposure is finished, try-ing to follow the star so closely that the finished picture will show it as one tiny pinpoint of light.

“Photographs of different sorts tell us many things about a star and its habits,” Mr. Joy says. “After studying the pictures we may be able to say that a certain star, 615 parsecs away, weighs fifty times as much as our own sun. No one will ever see the star except in photographs, but we know that it has a temperature of about 50,000 degrees centigrade, that it has a bluish white color, and is moving at a speed of twenty-five miles per second. Also, the pictures tell us that the chief elements in its surface are hydrogen, helium, and oxygen.”

For a long time astronomers have suspected that visible light is by no means the only kind of energy radiated by the stars. Cosmic rays and ultra-short radio waves that seem to come from outer space have been recorded and one of the present problems is to devise equipment that can measure energy waves the stars give out aside from light. A start has already-been made in measuring the ultraviolet and infrared rays of the sun. Members of the Mount Wilson staff are conducting experiments with the ultraviolet camera that compares the sun’s ultraviolet radiations with the amounts of green light that the sun sheds. The camera that picks up the invisible rays’ is mounted on a small telescope for accurate pointing. Inside the camera are two lenses, one coated with a thin film of gold and the other with a silver film. First the sun is photographed by the green light that passes through the gold-plated lens, and then a picture of the rays that pierce the silver lens is made. The silver allows only a narrow band of ultraviolet radiations to fall on the film. Infrared radiations from the sun are made by direct photography, utilizing red sensitive plates and filters.

Being the star nearest to earth, the sun is a subject of constant study. Astronomers maintain a twenty-four-hour a day watch on its activities year after year. Under an international schedule the Mount Wilson observatory makes fifteen photographs of the sun’s prominences and spots at four-minute intervals between 2:30 and 3:30 every afternoon. At 3:30 an observatory in Australia begins its schedule and is followed by others farther west. Sun telescopes are comparatively small, but the 200-inch giant, or even the present 100-inch telescope, will never be trained on the sun because the direct heat might be disastrous to the mirrors.