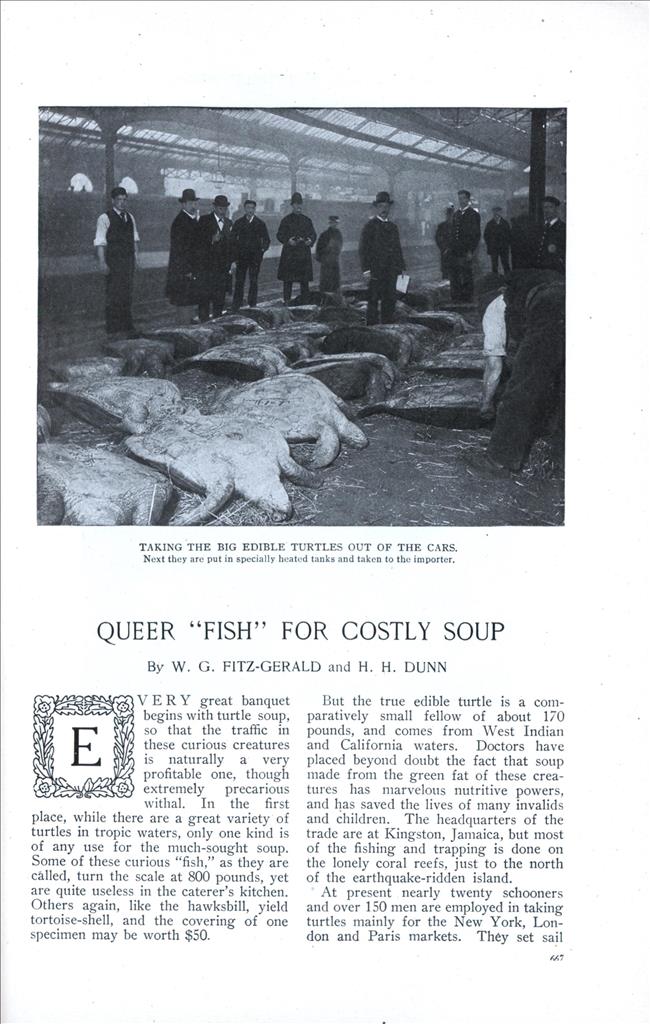 VERY great banquet begins with turtle soup, so that the traffic in these curious creatures is naturally a very profitable one, though extremely precarious withal. In the first place, while there are a great variety of turtles in tropic waters, only one kind is of any use for the much-sought soup. Some of these curious “fish,” as they are called, turn the scale at 800 pounds, yet are quite useless in the caterer’s kitchen. Others again, like the hawksbill, yield tortoise-shell, and the covering of one specimen may be worth $50.

But the true edible turtle is a comparatively small fellow of about 170 pounds, and comes from West Indian and California waters. Doctors have placed beyond doubt the fact that soup made from the green fat of these creatures has marvelous nutritive powers, and has saved the lives of many invalids and children. The headquarters of the trade are at Kingston, Jamaica, but most of the fishing and trapping is done on the lonely coral reefs, just to the north of the earthquake-ridden island.

At present nearly twenty schooners and over 150 men are employed in taking turtles mainly for the New York, London and Paris markets. They set sail from Kingston before dawn, and when they arrive on the fishing ground they stretch strong twine nets from rock to rock.

The victims are curiously stupid, and the moment they find their flippers or legs entangled they only cling the more closely to the fatal meshes. Then there is nothing for the men to do but venture into the shallow water and seize their prey: It is worth noting that serious injury is often inflicted upon these strange fishermen, who are badly bitten or else gashed by powerful blows from the turtles’ fins.

In due time, however, they return to their island headquarters with perhaps a couple of hundred of the valuable edible turtles. So expensive is the product, however, and so uncertain is it that the turtles shall be landed alive in New York or London that the demand is regulated artificially. In other words the turtle trappers know each month precisely how many “fish” they are to take. Otherwise quite useless expense would be incurred in shipping any over and above the required number.

The transport of the creatures is a most precarious business. Sometimes more than one-half the entire consignment will die on board the mail steamer in spite of constant feeding and spraying with salt water several times a day. Moreover, even when they arrive in New York or London others die in great numbers on the way from the railroad station to the importer’s headquarters.

For this reason some of the trucks or wagons are filled with portable hot water apparatus lest the queer “fish” get a fatal chill on the journey through the streets. New York alone imports 3,000 choice specimens every year and London as many more. The wholesale price charged to the importer is about twenty-five cents a pound. The curious thing. is that although the turtle is so susceptible to cold, his vitality in the kitchen, even after his head has been cut off, is altogether amazing.

One of the accompanying photographs shows a small part of the strange cargo of the steamer Curacao, which arrived at San Pedro, California, recently, after a short cruise in Lower California waters. This vessel brought hundreds of turtles, caught at sea and on the shores of coastwise islands to feed the epicures of Los Angeles, San Francisco and even as far north as Portland.

These huge marine turtles belong to the variety known as green turtles, and are not closely related to the giant land tortoises of the Galapagos Islands, the insular Chelonians being believed to be the oldest creatures known to man and the largest of their kind now in existence.

The edible turtles are caught in the following manner: On bright, moonlit nights the turtle hunters, leaving their ships in large boats, land on the broad, sandy beach of some tropical lagoon. There they find tracks of the female turtles leading from’ the water back to the dry sandhills. There the turtles are busily engaged laying their eggs, and, when they have finished, they waddle back to the sea.

It is on these return trips that the hunters catch the turtles. Rushing up to the turtle, two men seize her, one by a fore flipper, the other by a hind flipper, both on the same side. With a united effort they throw her over on her back, where she lies helplessly beating the air with her huge flippers, unable to turn back into a walking posture.

Then stout ropes are brought and the turtles, scores of which are sometimes caught in a single night, are hurried off to the steamer.- Some of these turtle-hunting boats carry tanks for their hard-shelled game, but as a rule the turtles are allowed to roll around on the deck, as shown in the photograph. Each of these turtles means several dollars to the man at the head of the expedition, if he can land them alive in almost any American port.

There is, however, the inevitable bad side to this business of turtle hunting. The constant killing off of the female Chelonians is gradually resulting in the extermination of the green turtles in many localities where they once were more than abundant.” Thus, it would seem, by failing to hunt and kill a majority of the males and letting more of the females live, the turtle hunters are slowly but surely killing the goose that lays the golden egg.