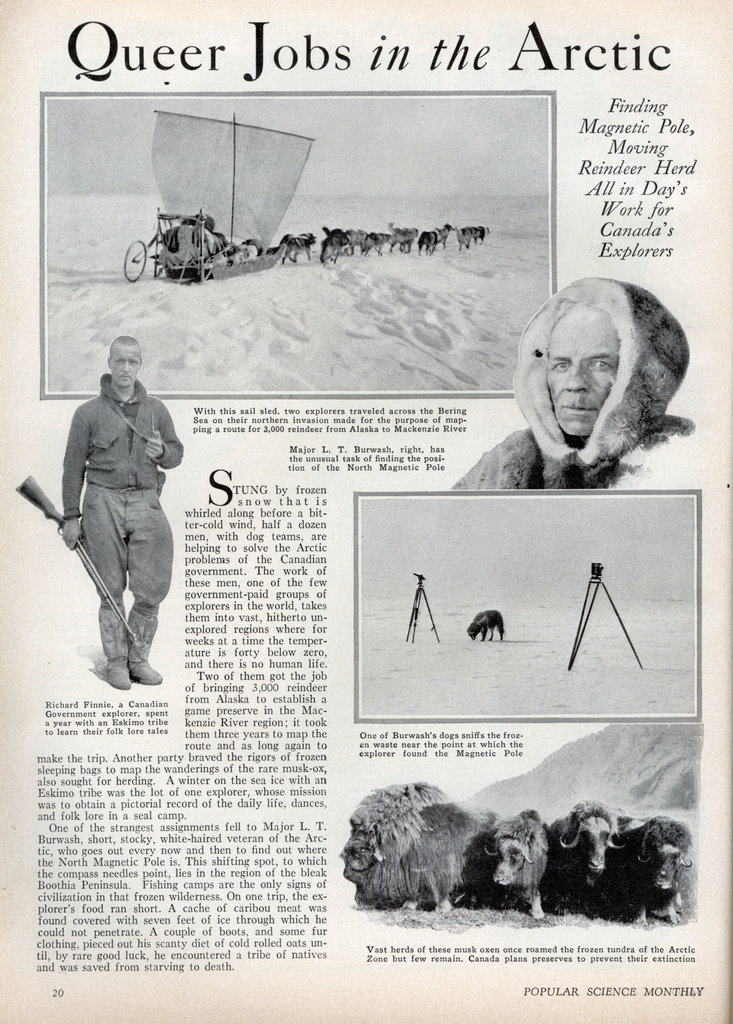 Queer Jobs in the Arctic

STUNG by frozen snow that is whirled along before a bitter-cold wind, half a dozen men, with dog teams, are helping to solve the Arctic problems of the Canadian government. The work of these men, one of the few government-paid groups of explorers in the world, takes them into vast, hitherto unexplored regions where for weeks at a time the temperature is forty below zero, and there is no human life.

Two of them got the job of bringing 3,000 reindeer from Alaska to establish a game preserve in the Mackenzie River region; it took them three years to map the route and as long again to make the trip. Another party braved the rigors of frozen sleeping bags to map the wanderings of the rare musk-ox, also sought for herding. A winter on the sea ice with an Eskimo tribe was the lot of one explorer, whose mission was to obtain a pictorial record of the daily life, dances, and folk lore in a seal camp.

One of the strangest assignments fell to Major L. T. Burwash, short, stocky, white-haired veteran of the Arctic, who goes out every now and then to find out where the North Magnetic Pole is. This shifting spot, to which the compass needles point, lies in the region of the bleak Boothia Peninsula. Fishing camps are the only signs of civilization in that frozen wilderness. On one trip, the explorer’s food ran short. A cache of caribou meat was found covered with seven feet of ice through which he could not penetrate. A couple of boots, and some fur clothing, pieced out his scanty diet of cold rolled oats until, by rare good luck, he encountered a tribe of natives and was saved from starving to death.