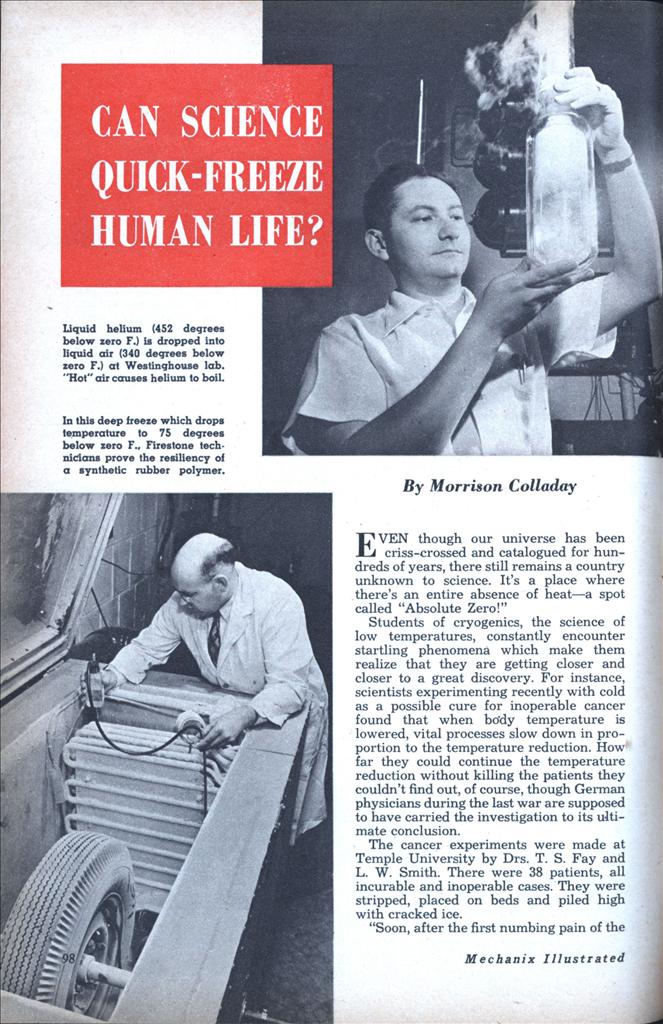 EVEN though our universe has been criss-crossed and catalogued for hundreds of years, there still remains a country unknown to science. It’s a place where there’s an entire absence of heat—a spot called “Absolute Zero!”

Students of cryogenics, the science of low temperatures, constantly encounter startling phenomena which make them realize that they are getting closer and closer to a great discovery. For instance, scientists experimenting recently with cold as a possible cure for inoperable cancer found that when body temperature is lowered, vital processes slow down in proportion to the temperature reduction. How far they could continue the temperature reduction without killing the patients they couldn’t find out, of course, though German physicians during the last war are supposed to have carried the investigation to its ultimate conclusion.

The cancer experiments were made at Temple University by Drs. T. S. Fay and L. W. Smith. There were 38 patients, all incurable and inoperable cases. They were stripped, placed on beds and piled high with cracked ice.

“Soon, after the first numbing pain of the ice was obliterated by anesthetics,” says Dr. Fay, “they fell into a frozen slumber. For five days they remained in a coma. Their pulse beats almost stopped, kidneys and bowels ceased functioning and their general body temperature fell from 98.6 to 90 degrees, a record sustained low. The only sign of life was the silent rhythm of their beating hearts. After five days of lethargy, the patients were awakened and given hot coffee. As they opened their eyes, they all smiled, commented on their deep, dreamless sleep. Not one of them developed pneumonia or even a slight cold. The growth of the tumors was checked and some even shrank.”

However, the results of this short test were inconclusive as the patients all eventually died from cancer, though perhaps not as soon as they would have otherwise.

Several scientists have been experimenting with the effect of cold on squirrels and guinea pigs. Dr. T. Akiyama of the Manchurian Medical College inoculated squirrels with a disease that produces tumors of the lymph glands. “The animals were divided into three groups,” he reports. “The first group was held as a control. The second received a refrigeration treatment for ten days; the third for 20 days. The control group all died. So did the second group which had been refrigerated for ten days or less. The third group came out of their torpid state unharmed and showed no signs of the disease.”

Even more interesting than these experiments on living cells at moderate degrees of temperature are those with temperatures nearer absolute zero. Certain types of bacteria, spores and infusoria which contain little liquid go into a state of suspended animation at these low temperatures. When thawed out, they resume living in the ordinary way. Cells containing more water die when frozen because, as scientists express it, “their molecular structure is rearranged in a thermodynamically stable configuration.”

However, the death of these organisms can be avoided if they are frozen very rapidly. Dr. Alexander Goetz of California Institute of Technology explains, “Then the molecules are immobilized before they can change their pattern. They become vitreous like glass— that is, solid but with the molecular arrangement of a liquid.”

Dr. Goetz cools his specimens in a fraction of a second with liquid hydrogen which has a temperature of 252 degrees below zero Centigrade. He believes that a cell maintained at that temperature could be preserved for 10,000 years without aging biologically more than one minute!

“The death of human blood corpuscles,” he told a meeting of the American Chemical Society, “could be almost indefinitely postponed by extremely low temperatures because of retarded reaction rates of matter in the region of absolute zero. Between normal temperatures and the realms of extreme cold, stretches nature’s valley of ‘frozen death’ for living things.”

But most scientists—at least outside of Russia—believe that it is impossible at the present time with the present knowledge to freeze a warm-blooded animal and then bring it back to life. The Russians, however, have been making ambitious attempts to do this for a number of years. They began by trying to bring back to life animals frozen in prehistoric times. Many of these have been found perfectly preserved in the frozen marshes at the mouth of the River Lena. Before the war, considerable progress had been made in developing methods of thawing out frozen tissues without essentially altering them. Many smaller organisms frozen thousands of years ago were restored to life.

Very little scientific information has come out of Russia since the war. But rumors of spectacular successes in reviving larger mammals frozen during the ice ages have leaked out. However, no information that could be called scientific by any stretch of the imagination is available and we can only scoff at the stories that Russians have been able to restore to life stone-age men and frozen mammals.

If the dreams of fantasy writers about men being put to sleep and waking a few thousand years in the future ever become realities, the method used probably will be that of suddenly reducing the body temperature to the neighborhood of absolute zero.

Assuming that you could be brought back to life after your temperature had been suddenly reduced greatly, keeping your body at that temperature for a couple of thousand years and thawing it out at the appointed moment might not be too difficult. It would be necessary to devise a machine planned to do just that and operated by the energy of one of the radioactive elements.

You could choose to be awakened almost any time in the future, depending upon the element used to power the cold-producing machine. Carbon 14, for instance, has a radioactive half-life of 4000 years. This means that 4000 years is the period of time during which half the atoms of any quantity of carbon 14 would disintegrate. At the end of the 4000 years only half of the carbon 14 would be gone so there would be plenty of leeway if you want to wake up say 2000 years in the future..

All you would need is a tank of liquid hydrogen to start you off and the radioactivated machine adjusted to keep your temperature down to 252 degrees below zero Centigrade for 2000 years. When the planned amount of radioactivity of the element chosen had been expended, a device for thawing you out would automatically start to function.

If everything went according to plan, you’d awaken refreshed and ready to begin life again in a strange new world.