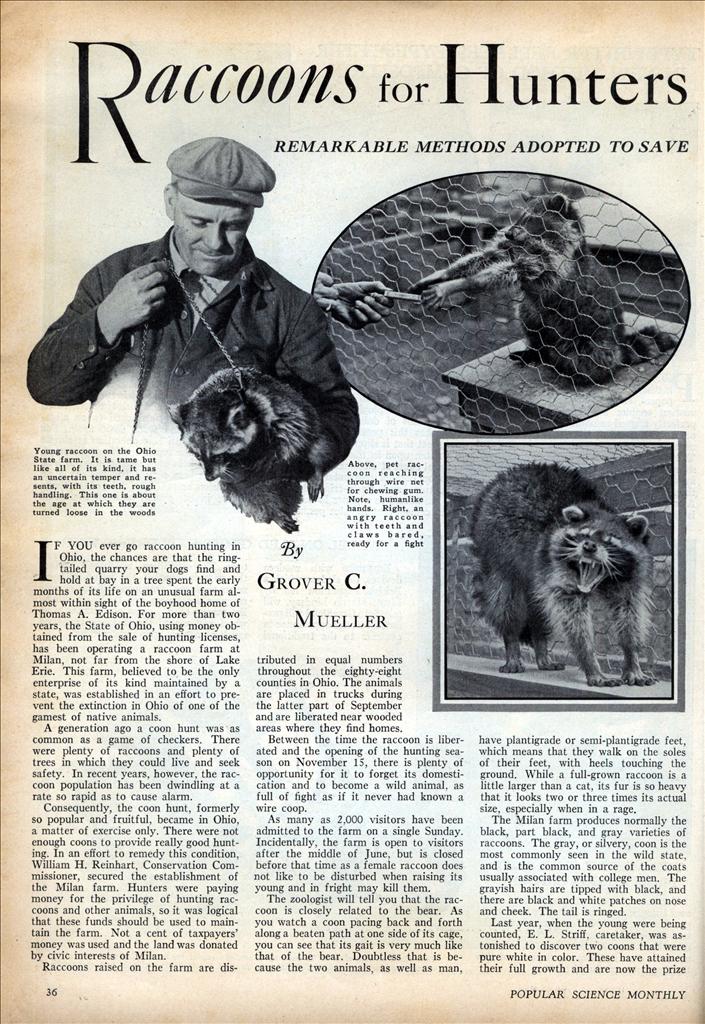 REMARKABLE METHODS ADOPTED TO SAVE GAME ANIMALS FROM EXTINCTION

Grover C. Mueller IF YOU ever go raccoon hunting in Ohio, the chances are that the ring-tailed quarry your dogs find and hold at bay in a tree spent the early months of its life on an unusual farm almost within sight of the boyhood home of Thomas A. Edison. For more than two years, the State of Ohio, using money obtained from the sale of hunting licenses, has been operating a raccoon farm at Milan, not far from the shore of Lake Erie. This farm, believed to be the only enterprise of its kind maintained by a state, was established in an effort to prevent the extinction in Ohio of one of the gamest of native animals.

A generation ago a coon hunt was as common as a game of checkers. There were plenty of raccoons and plenty of trees in which they could live and seek safety. In recent years, however, the raccoon population has been dwindling at a rate so rapid as to cause alarm.

Consequently, the coon hunt, formerly so popular and fruitful, became in Ohio, a matter of exercise only. There were not enough coons to provide really good hunting. In an effort to remedy this condition, William H. Reinhart, Conservation Commissioner, secured the establishment of the Milan farm. Hunters were paying money for the privilege of hunting raccoons and other animals, so it was logical that these funds should be used to maintain the farm. Not a cent of taxpayers’ money was used and the land was donated by civic interests of Milan.

Raccoons raised on the farm are distributed in equal numbers throughout the eighty-eight counties in Ohio. The animals are placed in trucks during the latter part of September and are liberated near wooded areas where they find homes.

Between the time the raccoon is liberated and the opening of the hunting season on November 15, there is plenty of opportunity for it to forget its domestication and to become a wild animal, as full of fight as if it never had known a wire coop.

As many as 2,000 visitors have been admitted to the farm on a single Sunday. Incidentally, the farm is open to visitors after the middle of June, but is closed before that time as a female raccoon does not like to be disturbed when raising its young and in fright may kill them.

The zoologist will tell you that the raccoon is closely related to the bear. As you watch a coon pacing back and forth along a beaten path at one side of its cage, you can see that its gait is very much like that of the bear. Doubtless that is because the two animals, as well as man, have plantigrade or semi-plantigrade feet, which means that they walk on the soles of their feet, with heels touching the ground. While a full-grown raccoon is a little larger than a cat, its fur is so heavy that it looks two or three times its actual size, especially when in a rage.

The Milan farm produces normally the black, part black, and gray varieties of raccoons. The gray, or silvery, coon is the most commonly seen in the wild state, and is the common source of the coats usually associated with college men. The grayish hairs are tipped with black, and there are black and white patches on nose and cheek. The tail is ringed.

Last year, when the young were being counted, E. L. Striff, caretaker, was astonished to discover two coons that were pure white in color. These have attained their full growth and are now the prize possessions of the farm. It is unlikely that the white raccoons will be liberated. They are somewhat of a rarity and their pelts are valuable. The white raccoons are sports, or albinos. This means that hereditary traits so combined that coloring material was omitted from their makeup. Consequently, they have white hair and colorless eyes, a condition that not infrequently occurs among human beings. Experiments are being planned to see if a strain of white raccoons, like white rats, can be maintained. Incidentally, these animals resemble overgrown rats more than anything else.

The raccoon is a highly independent amimal, able to take care of itself anywhere. It has been the experience of the farm staff that coons are among the healthiest animals ever raised in captivity. If normal care is given to their diet, they will thrive readily. They are remarkably free of common animal diseases.

One of the entertaining traits of a coon is its apparently limitless curiosity. It will examine any strange thing that comes in its way. Its paws resemble the hands of monkeys and are equipped with needlelike claws. The raccoon is an expert excavator, and can dig holes with ease.

Among American animals the raccoon is surpassed only by the bat and the flying squirrel as a lover of night life. During the daytime the raccoon sleeps. For this reason, the Milan coon farm frequently looks deserted to the visitor. As evening approaches, there is a stir of activity in every cage, and at night the inmates are up and about. Every coon hunter knows that he and his dogs can do their tracking best at night.

So important is a tree den in the lives of raccoons and squirrels that Ohio conservation officials have started a movement, through sportsmen’s organizations, to save the existing hollow trees in which these animals live. A land owner has a dead or dying tree on his place, and to him it is merely an eyesore or a potential source of firewood. He cuts it down without thinking that, to a family of coons or squirrels, it is home sweet home; and when the home of a wild animal is destroyed, it is more difficult for that animal to protect itself and raise its young. When a coon cannot set up housekeeping in a hollow tree, it may seek out a stream and live along the banks, for by nature it is a water-loving animal.

The movement includes the creation of new tree homes for coons and squirrels. Hollow trees whose openings are too large for the animals can be partially filled or closed so as to render them habitable. Trees that are decayed but not hollow can be opened up. Hollow trees with openings too small for occupancy can be enlarged. Of course, such operations are undertaken only when the tree is not useful to the owner of the land for any other purpose.

A raccoon will eat almost anything. Feeding schedules at the state farm call for a wide variety of food, with a preference for vegetables rather than meats during the hot season. Lake Erie, a few miles away, provides an abundance of fish. Large quantities of milk are used. Green corn, rolled oats, corn meal, ear corn, dried bread, and tomatoes also are fed. In the wild state, a coon is his own fisherman. He will capture fish, crayfish, and mussels. Although an expert swimmer, he cannot dive and chase his prey under water.

The Milan raccoon farm consists of about 600 cubical pens made of chicken wire on wooden framework, and arranged in orderly rows. In each pen there may be two or three males, but each female has her own apartment. The young are born in early spring, there being one to five in a litter. They normally remain with their mother during the first year. For several weeks after birth of the young, the females cannot be disturbed. If they are, they will kill their young by dragging them about in an effort to hide them from the approach of intruders.

In addition to raccoons, the state raises rabbits and a limited number of pheasants at the Milan farm. It is necessary to keep on duty a professional hunter who spends his time shooting and trapping weasels, owls, hawks, and other predatory animals that prey upon the rabbits and birds. However, no such service is required at the raccoon section because the average coon can take care of such intruders without assistance.

Last spring there were 676 raccoons on the Milan farm. Their offspring probably will total 1,500. In the fall most of the young animals, together with some older ones, will be liberated. Enough young ones will be kept to assure an adequate breeding stock. The value of the raccoons to be released runs into thousands of dollars. Although exact prices cannot be quoted, the hunter who captures a gray coon this fall probably can get from $4 to $5 for its pelt. If he gets a part-black coon, he can sell its pelt for around $6 and if his luck is unusually good, he will bag a pure black one that will net him $7.

The Ohio raccoon farm is in many ways a pioneer institution. It is regarded as an excellent example of the way in which desirable wild animals can be saved from extinction. As the population of the United States grows more dense, it becomes more difficult for wild animals and birds to exist. People unintentionally destroy natural sources of food and protection, with the result that the native animals must either adapt themselves to new conditions or perish.

Because raccoons can be raised in captivity with perhaps a greater degree of success than most other animals, coon farming some day may be an industry of considerable size. Already, many persons are picking up extra dollars by raising coons.