Popular Electronics
Issue: May, 1956
Posted in: General
No Comments on Radar on the Highway (May, 1956) 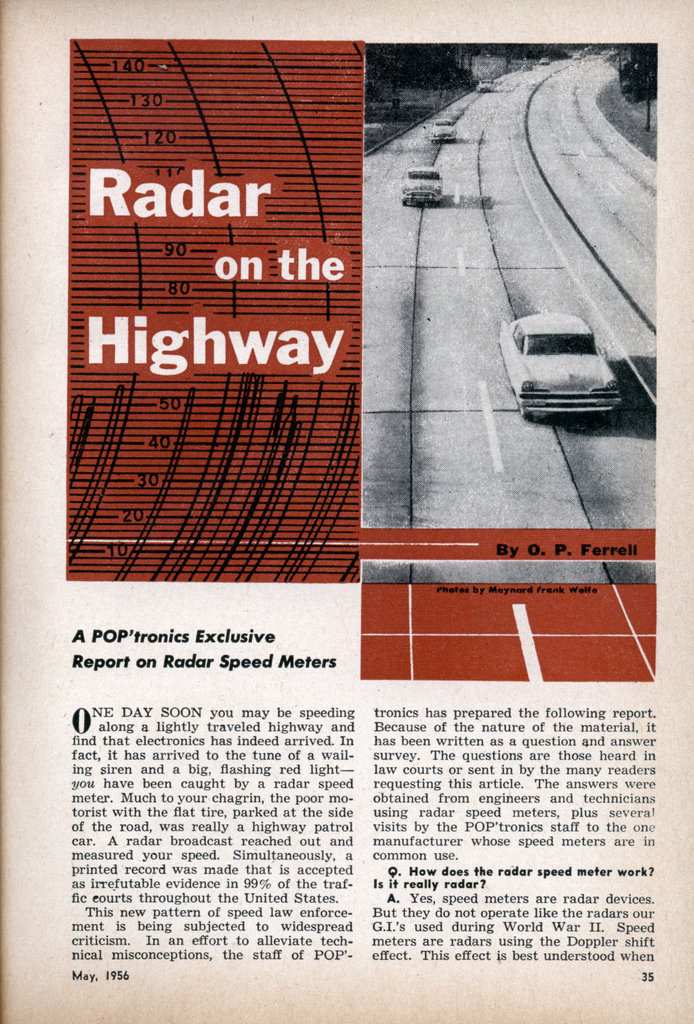 Radar on the Highway

ONE DAY SOON you may be speeding along a lightly traveled highway and find that electronics has indeed arrived. In fact, it has arrived to the tune of a wailing siren and a big, flashing red lightâ€” you have been caught by a radar speed meter. Much to your chagrin, the poor motorist with the flat tire, parked at the side of the road, was really a highway patrol car. A radar broadcast reached out and measured your speed. Simultaneously, a printed record was made that is accepted as irrefutable evidence in 99% of the traffic courts throughout the United States.

This new pattern of speed law enforcement is being subjected to widespread criticism. In an effort to alleviate technical misconceptions, the staff of POP’-

tronics has prepared the following report. Because of the nature of the material, it has been written as a question and answer survey. The questions are those heard in law courts or sent in by the many readers requesting this article. The answers were obtained from engineers and technicians using radar speed meters, plus several visits by the POP’tronics staff to the one manufacturer whose speed meters are in common use.

p. How does the radar speed meter work? Is it really radar?

A. Yes, speed meters are radar devices. But they do not operate like the radars our G.I.’s used during World War II. Speed meters are radars using the Doppler shift effect. This effect is best understood when applied to sound rather than to radio waves. It is the change in the pitch of a train whistle, or automobile horn, as it speeds past a stationary observer. The pitch heard by the observer is different from that radiated by the whistle or horn. If the train is approaching, the pitch sounds higher; if it is receding, the pitch will sound lower.

A radar speed meter operates on the same principle. It measures the difference in pitch by sending out a u.h.f. radio wave and listening for the change after it is reflected by the moving car. If the car is not in motion, the radar speed meter does not “see” it. As soon as the car moves, the speed can be measured. The faster the car moves, the greater the change in pitch.

Technically speaking, all radar speed meters operate on 2455 mc. Speed is read as an audio frequency by mixing the continuous wave radiated by the transmitter with the reflected wave from the moving car. A speed of 100 miles per hour is equivalent to a Doppler shift of 731 cycles. The audio frequency may be read directly from a meter, or recorded on paper tape.

A. In the vast majority of cases, the speed meter will read within plus or minus two miles-per-hour of the actual speed. Field trials of the equipment by POP’-tronics editors always gave results lower than the car speed by about one or two miles. Because of the principle of operation, it is practically impossible to make a speed meter read more than actual car speed, but a faulty “zero” adjustment could be made. This means that the speed meter would read five to ten miles per hour if no car was intercepting the radio beam.

Q. How does the police officer know if his equipment is operating properly?

A. Officers are trained to assemble and calibrate the speed meter. In addition, the speed meter has a tuning fork calibrator. It is simply “rung” in front of the antenna. The speed meter will then read. The frequency of the fork will be 7.31 times the miles-per-hour meter indication. This frequency is stamped on the fork and cannot be changed.

Q. Should the motorist make the arresting officer prove his radar is calibrated correctly?

A. If the motorist is positive that his speed was considerably less than that indicated by the meter, it might be worth an attempt. In some states, motorists have a legal right to request this information; in most of the others, it would be a courtesy on the part of the officer. The philosophy employed by most courts and police officers is that the radar speed meter is just as accurate as the speedometer in a patrol car. Speedometer errors are known to exist and often exceed five or six miles per hour OVER actual speed at 60 miles-per-hour.

Q. How many radar speed meters are there, and where are they located?

A. Radars must be licensed by the FCC. At this writing, there are about 1600 radars in use. They are scattered throughout all 48 states. Most of the longer freeway, turnpike, or expressway police patrols have one or more radar speed meters in operation daily.

Q. Can the speed of one car be measured from a police car that is in motion?

A. This is a popular misconception. The radar speed meter MUST be standing still. It should be mounted about three feet above the ground and pointed down the highway. Speed meters cannot be used in moving vehicles.

Q. How does a radar speed meter distinguish between cars?

A. Present-day equipment does not make an attempt to distinguish between cars.

This is left to the officer monitoring the equipment. His paper tape recording will register the top speed of the cars closest to the speed meter. He must pick out the speeder visually and correlate it with the meter reading.

Q. How can a speed meter be hidden?

A. There is a variety of ways of hiding speed meters, with the favorite being a cutout in the metal lid of the trunk compartment. This cutout is then covered with plastic and painted to match the color of the remaining trunk lid. The radar looks out through the hole when the police car has stopped at the side of the road.

p. Would hiding a speed meter be called “entrapment”?

A. In some courts, yes, but this is a legal point now under investigation It is important to note that the State of Ohio requires a notice to be served on the public not less than 750 feet in front of an operating speed meter. Most states will not regard speed meters as “speed traps.”

Q. Can the radar speed meters be jammed like wartime radars?

A. Yes, but only by operating an illegal (unlicensed by the FCC) transmitter on the same frequency (2455 mc.) as the speed meter. Radio amateurs might “accidentally” jam the speed meter using their 2450-mc. band. In any case, this would be of doubtful advantage since the “jamming” equipment would become costly to build and operate continuously.

Q. Could a police officer detect a “jammed” speed meter?

A. Yes, the indicators would either become totally dead, or else they would swing off scale.

p. Can a speeder leave a trail of aluminum foil to upset the radar?

A. Scattering aluminum foil has no effect on radar speed meters. This type of radar will only react to motion.

p. What about grounding the car to ground out the signal?

A. There would be no effect whatsoever on the speed meter indication.

p. What other devices have been used to fool radar speed meters?

A. A wide variety of gimmicks has been sold to the public. They have included special devices to ground the car through the hubcaps and an absorption shield mounted behind the radiator. None of them will have any effect on the speed meter.

p. Couldn’t a microwave detector be built to warn the motorist?

A. Yes, a detector could be built, and several designs were considered during the preparation of this article. All of them are costly to build and have a limited range.

p. Will POP’tronics publish such a design?

A. If there is sufficient reader interest, we might assign the task to a project engineer for development.

p. If radar speed meters continue to gain acceptance, what will be the future of this device?

A. Police authorities are now anxious to test several new devices which promise greater control over speeding. One such example is shown in the photograph at the left. The innocent-looking street lamp is actually a complete radar unit. It is beaming radar waves up and down the highway. The information from this radar is fed into a master control station at a local police headquarters. This enables undermanned police departments to dispatch patrol cars to areas where traffic is flowing either too fast or too slow.

Within the next two years, several express highways will be “saturated” with these radars. The data will be reviewed by an electronic computer to measure the flow and density of traffic. An experimental installation will be made on the Merritt Parkway in the area of Westport, Conn., by the end of this summer.