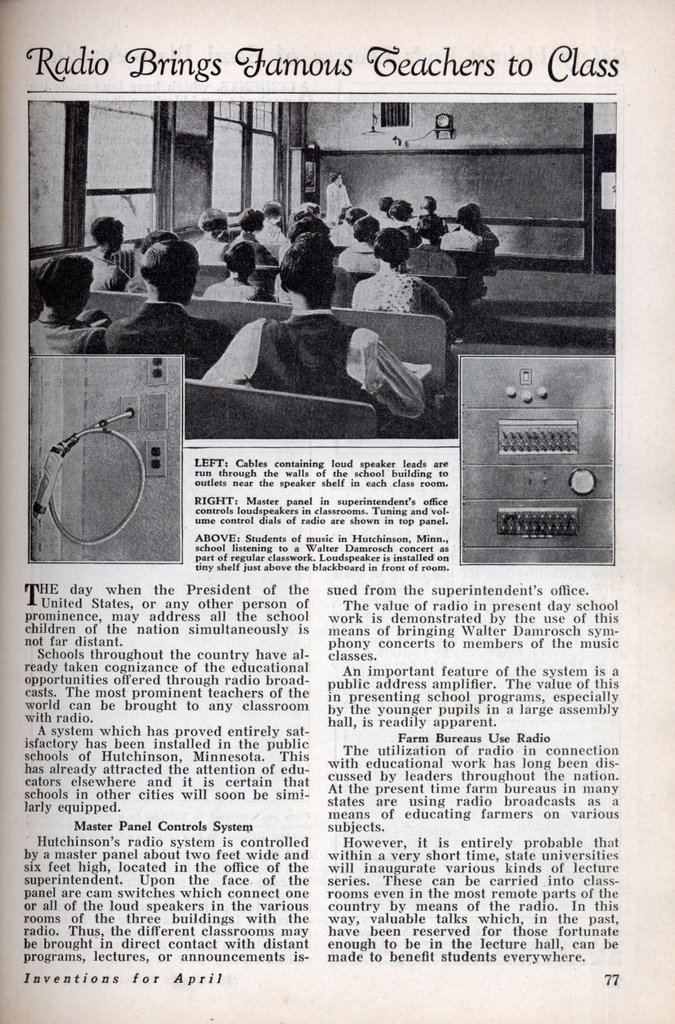 THE day when the President of the United States, or any other person of prominence, may address all the school children of the nation simultaneously is not far distant.

Schools throughout the country have already taken cognizance of the educational opportunities offered through radio broadcasts. The most prominent teachers of the world can be brought to any classroom with radio.

A system which has proved entirely satisfactory has been installed in the public schools of Hutchinson, Minnesota. This has already attracted the attention of educators elsewhere and it is certain that schools in other cities will soon be similarly equipped.

Master Panel Controls System Hutchinson’s radio system is controlled by a master panel about two feet wide and six feet high, located in the office of the superintendent. Upon the face of the panel are cam switches which connect one or all of the loud speakers in the various rooms of the three buildings with the radio. Thus, the different classrooms may be brought in direct contact with distant programs, lectures, or announcements is- sued from the superintendent’s office.

The value of radio in present day school work is demonstrated by the use of this means of bringing Walter Damrosch symphony concerts to members of the music classes.

An important feature of the system is a public address amplifier. The value of this in presenting school programs, especially by the younger pupils in a large assembly hall, is readily apparent.

Farm Bureaus Use Radio The utilization of radio in connection with educational work has long been discussed by leaders throughout the nation. At the present time farm bureaus in many states are using radio broadcasts as a means of educating farmers on various subjects.

However, it is entirely probable that within a very short time, state universities will inaugurate various kinds of lecture series. These can be carried into classrooms even in the most remote parts of the country by means of the radio. In this way, valuable talks which, in the past, have been reserved for those fortunate enough to be in the lecture hall, can be made to benefit students everywhere.