Modern Mechanix
Issue: Jun, 1931
Posted in: Architecture
No Comments on “Radio City” will be Marvel of Architecture (Jun, 1931) 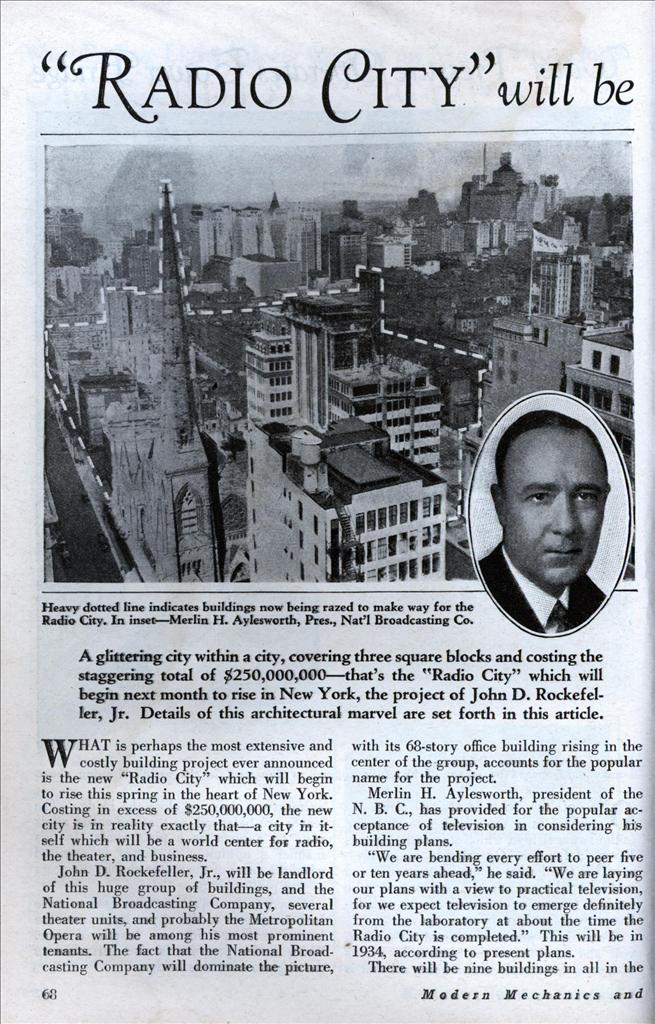 “Radio City” will be Marvel of Architecture

A glittering city within a city, covering three square blocks and costing the staggering total of $250,000,000—that’s the “Radio City” which will begin next month to rise in New York, the project of John D. Rockefeller, Jr. Details of this architectural marvel are set forth in this article.

WHAT is perhaps the most extensive and costly building project ever announced is the new “Radio City” which will begin to rise this spring in the heart of New York. Costing in excess of $250,000,000, the new city is in reality exactly that—a city in itself which will be a world center for radio, the theater, and business.

John D. Rockefeller, Jr., will be landlord of this huge group of buildings, and the National Broadcasting Company, several theater units, and probably the Metropolitan Opera will be among his most prominent tenants. The fact that the National Broadcasting Company will dominate the picture, with its 68-story office building rising in the center of the group, accounts for the popular name for the project.

Merlin H. Aylesworth, president of the N. B. C, has provided for the popular acceptance of television in considering his building plans.

“We are bending every effort to peer five or ten years ahead,” he said. “We are laying our plans with a view to practical television, for we expect television to emerge definitely from the laboratory at about the time the Radio City is completed.” This will be in 1934, according to present plans.

There will be nine buildings in all in the Radio City, occupying a space of three square blocks valued at $100,000,000, on which Mr. Rockefeller holds a long term lease at $3,-000,000 a year rental. The broadcasting tower will not be as tall as the Empire State building, which now holds the height record, but it will contain 150,000 more feet of floor space—2,000,000 in all. On one side it will present an unbroken wall 675 feet high. Only thirty studios will be built at first, but the center of the building is so designed as to permit the construction of sixteen more.

For a distance of sixteen stories above the street, there will be no windows.

In designing the studios, architects have made special provisions to accommodate the thousands of visitors who will flock to the entertainment center. Separate elevators will take them to the gallery floors, where they will take theater seats and look down into the studios and control rooms through thousands of square feet of soundproof plate glass partitions.

Several of the broadcasting chambers will be at least 115 feet long, 65 feet wide and three stories high. These size proportions are expected to provide the ultimate in acoustical effects. An increased use of the directional type of microphone, which is set up some distance from the performer, is anticipated.

Some of the studios will incorporate a novel adaptation of the revolving stage idea, except that it will be the control room containing the recording apparatus which will rotate, rather than the stage. This control room, circular in shape, will be located at the intersection of four studios so that the operators can switch from one set to another with unbroken continuity, giving an almost instantaneous change of scene.

Elaborately insulated walls and floors will make the broadcasting rooms entirely soundproof. This is particularly important where the programs being broadcast are laid in out-of-door settings, where the slightest room noise would destroy the effect.

It is possible that the central tower of the Radio City will be surmounted by the masts of a television transmitter to release images for audiences in the metropolitan area. Whether or not it will be practical to broadcast television programs from the heart of the city, or whether it will be necessary to locate the transmitters in the suburbs, as is the case with most of the broadcast transmitters, will not be definitely known until tests now under way are completed. Adjacent skyscrapers, it is feared, will have a bad effect on television images, absorbing energy from the broadcast waves, leaving the images grotesquely distorted.

Although the immense sum of $250,000,000 has been announced as the probable cost of the Radio City, it is likely that even this tremendous figure will be found inadequate. Unofficially it has been reported that construction costs will run closer to $400,000,000 by the time the city is completed. It is pointed out that the plans announced will likely be changed in some details to meet changing circumstances as building of the city progresses.

Whether or not television is going to duplicate the success of audibly broadcast radio programs is something which nobody knows definitely, but the fact that the keenest brains in the radio world are providing for television broadcasts in their new wonder building is significant of the preparations being made by the industry to welcome television as an accomplished fact.