Radio-Controlled Rockets for the NEXT WAR (Apr, 1931) 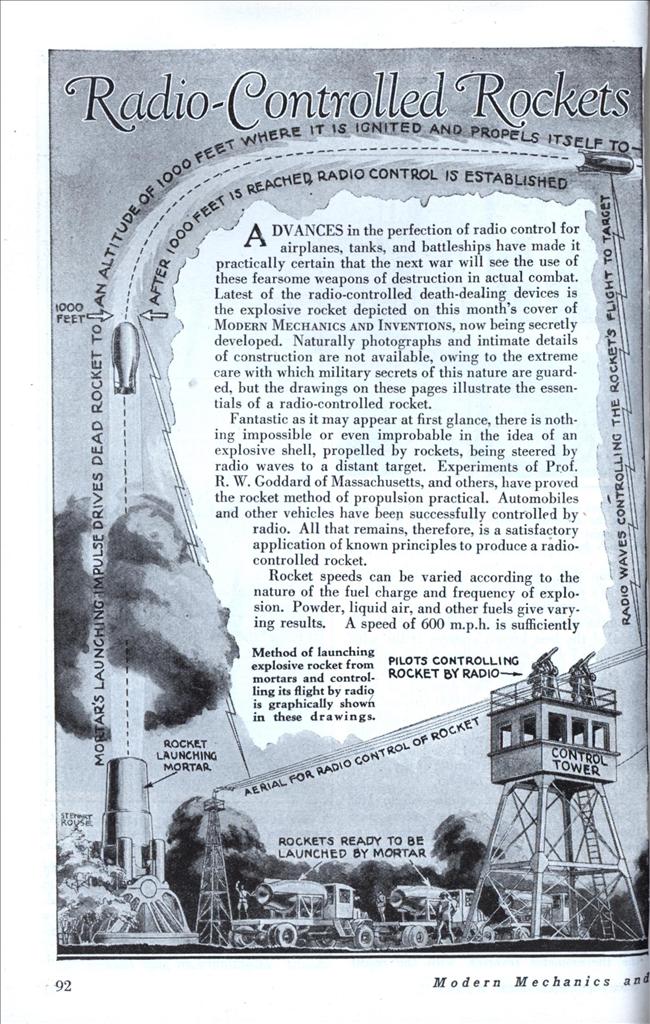 Radio-Controlled Rockets for the NEXT WAR

ADVANCES in the perfection of radio control for airplanes, tanks, and battleships have made it practically certain that the next war will see the use of these fearsome weapons of destruction in actual combat. Latest of the radio-controlled death-dealing devices is the explosive rocket depicted on this month’s cover of Modern Mechanics and Inventions, now being secretly developed. Naturally photographs and intimate details of construction are not available, owing to the extreme care with which military secrets of this nature are guarded, but the drawings on these pages illustrate the essentials of a radio-controlled rocket.

Fantastic as it may appear at first glance, there is nothing impossible or even improbable in the idea of an explosive shell, propelled by rockets, being steered by radio waves to a distant target. Experiments of Prof. R. W. Goddard of Massachusetts, and others, have proved the rocket method of propulsion practical. Automobiles and other vehicles have been successfully controlled by radio. All that remains, therefore, is a satisfactory application of known principles to produce a radio-controlled rocket.

Rocket speeds can be varied according to the nature of the fuel charge and frequency of explosion. Powder, liquid air, and other fuels give varying results. A speed of 600 m.p.h. is sufficiently glow to enable officers to follow the course of the rocket, and fast enough to render it impossible for a Zeppelin or airplane to dodge it. Mortars would likely be used in launching rockets, in order to avoid danger to ground crews. After reaching a height of 1000 feet or more, the rocket propellant would be ignited and radio control established. Ordinary control fins like those on an airplane would suffice to steer the rocket.

Range-finders or “electric ears” like those employed with anti – aircraft guns would direct the radio-controlled rocket to its target when that target happened to be an aircraft, although rockets could be directed at ground targets just as easily.

Another advantage of a radio rocket is that a sufficient charge of fuel can be carried to propel it over long distances, giving it a range infinitely greater than that of the German gun which shelled Paris from a distance of 75 miles during the World war.