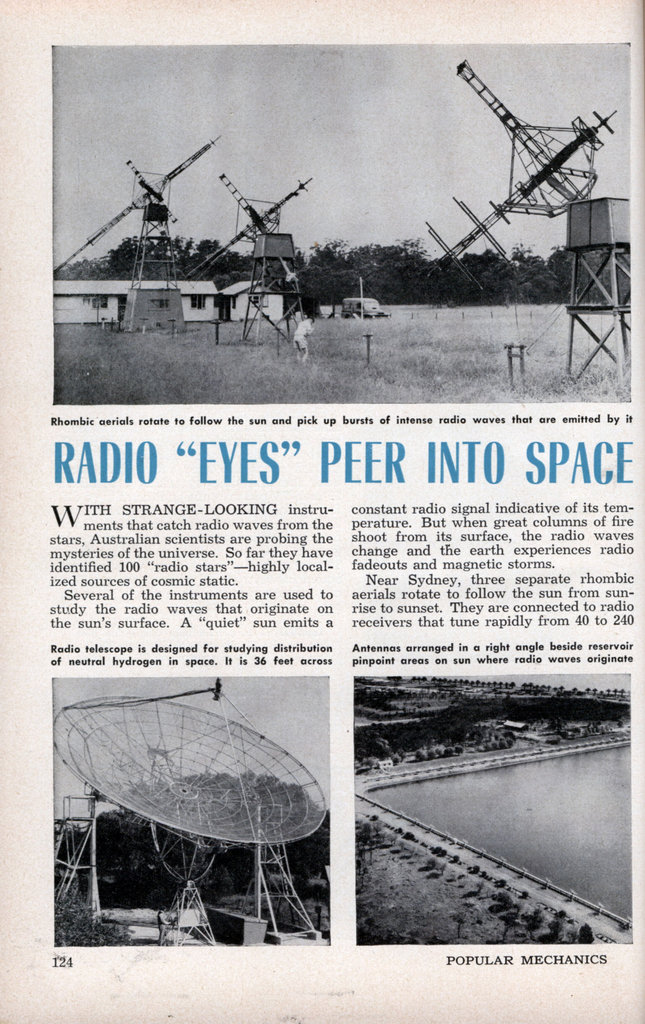 Several of the instruments are used to study the radio waves that originate on the sun’s surface. A “quiet” sun emits a constant radio signal indicative of its temperature. But when great columns of fire shoot from its surface, the radio waves change and the earth experiences radio fadeouts and magnetic storms.

Near Sydney, three separate rhombic aerials rotate to follow the sun from sunrise to sunset. They are connected to radio receivers that tune rapidly from 40 to 240 megacycles each second, and record when and on what wavelength any of these transitory disturbances occur.

Another installation consists of 48 parabolic “dish” antennas arranged in two rows at right angles to each other. Operating in a very narrow range, the system can pinpoint any existing active radio areas on the sun.

The distribution of neutral hydrogen in space is investigated with a small radio telescope that has a bowl antenna 36 feet in diameter. Hydrogen gas is audible on its receiver as a steady humming note.

A larger radio telescope in use is 80 feet in diameter and is mounted in a bowl hollowed out of the ground on a cliff near the entrance to Sydney Harbor.

Australia’s biggest radio telescope, however, is the “Southern Cross,” named for its shape. Each of the 1500-foot arms of the cross contains hundreds of receiving elements which pick up the minute static of far-distant radio stars.

Eventually this equipment will be augmented by a giant saucer-shaped aerial 250 feet in diameter that will rotate between two towers 200 feet from the ground. This will allow the telescope to scan any section of sky. * * *