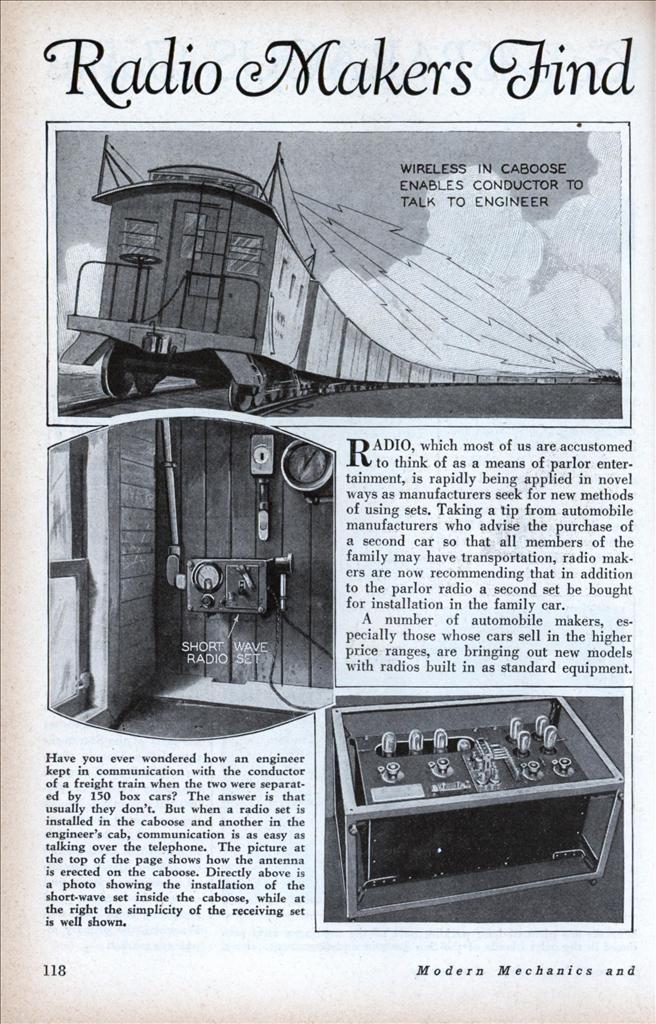 No longer is radio confined to furnishing parlor entertainment. Manufacturers have found numerous new uses for radio sets which promise to make them an even more important part of our everyday life.

RADIO, which most of us are accustomed to think of as a means of parlor entertainment, is rapidly being applied in novel ways as manufacturers seek for new methods of using sets. Taking a tip from automobile manufacturers who advise the purchase of a second car so that all members of the family may have transportation, radio makers are now recommending that in addition to the parlor radio a second set be bought for installation in the family car.

A number of automobile makers, especially those whose cars sell in the higher price ranges, are bringing out new models with radios built in as standard equipment.

Within a few years it is predicted that a radio will come to be as necessary a part of the car’s equipment as bumpers and speedometers, which not so many years ago were regarded as luxury items.

Police departments are making increasing use of radio as a means of catching criminals. The broadcasting of information and descriptions regarding criminals has been in use for some time with satisfactory results, but Los Angeles police have recently gone a step farther. Police cars containing plainclothes men, cruising about the city streets, are now equipped with dashboard radio sets. By tuning in to the proper wave length, information concerning robberies can be broadcast to officers all over the city who will immediately be in a position to give chase to suspects without loss of time.

Another application of radio which is finding favor with railroad companies is the use of sets to keep the engineer in communication with the conductor of long freight trains. The conductor, sitting in the caboose, simply tunes in a short wave set and holds a conversation with the engineer who may be a mile or more ahead of him, separated by a long string of cars. Airplanes have long made use of radio. Recently telephone conversations were held from an airplane 2500 feet up, in communication with a newspaper office. Experiments in the refinement of the necessary apparatus promise to develop sets for airplane use which will be light enough for installation in any plane and which will enable passengers to talk with friends on the ground.