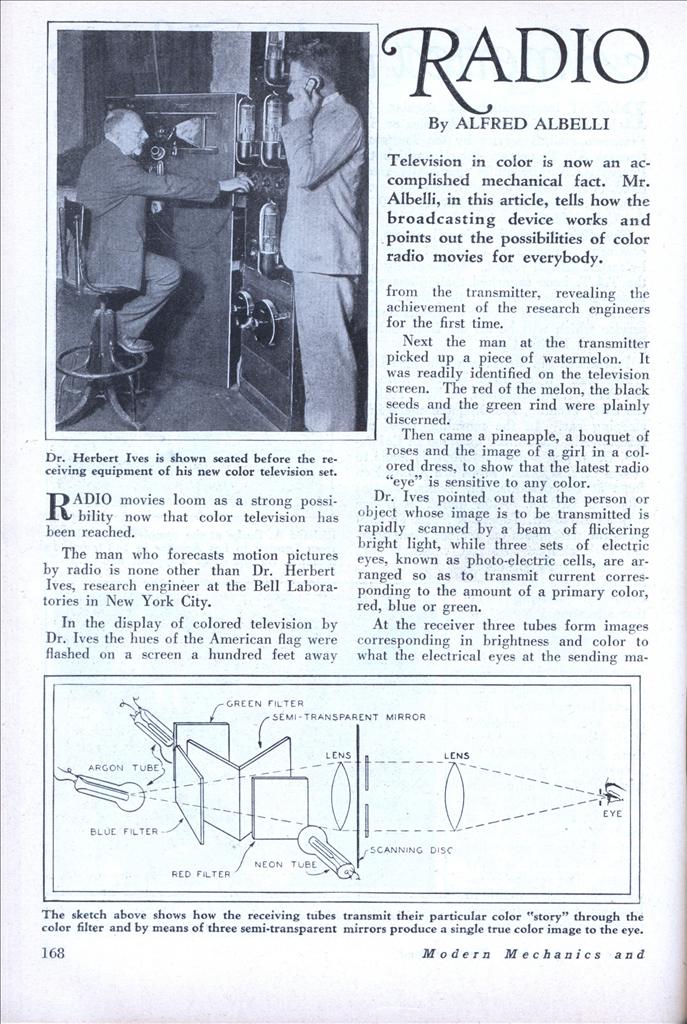 Television in color is now an accomplished mechanical fact. Mr. Albelli, in this article, tells how the broadcasting device works and points out the possibilities of color radio movies for everybody.

RADIO movies loom as a strong possibility now that color television has been reached.

The man who forecasts motion pictures by radio is none other than Dr. Herbert Ives, research engineer at the Bell Laboratories in New York City.

In the display of colored television by Dr. Ives the hues of the American flag were flashed on a screen a hundred feet away from the transmitter, revealing the achievement of the research engineers for the first time.

Next the man at the transmitter picked up a piece of watermelon. It was readily identified on the television screen. The red of the melon, the black seeds and the green rind were plainly discerned.

Then came a pineapple, a bouquet of roses and the image of a girl in a colored dress, to show that the latest radio “eye” is sensitive to any color. Dr. Ives pointed out that the person or object whose image is to be transmitted is rapidly scanned by a beam of flickering bright light, while three sets of electric eyes, known as photo-electric cells, are arranged so as to transmit current corresponding to the amount of a primary color, red, blue or green.

At the receiver three tubes form images corresponding in brightness and color to what the electrical eyes at the sending machine see. A system of mirrors combines the three images to form the one color image on the receiving screen.

“The outstanding contributions that have made color television possible,” said Dr. Ives, “are a new photo-electric cell, new gas cells for reproducing the image and the instruments associated directly with them.

“Each of the three sets of photo-electric cells used is provided with color filters or sheets of colored gelatine. One set has filters of an orange-red color, which makes the ‘eyes’ see things as the red sensitive nerves of the retina see them; another set has yellow-green filters to give the green effect and the third has green-blue filters for the blue constituent of vision.

“I do not think the day distant when radio movies will be flashed in color on a large screen, though for some time the process will be rather expensive,”