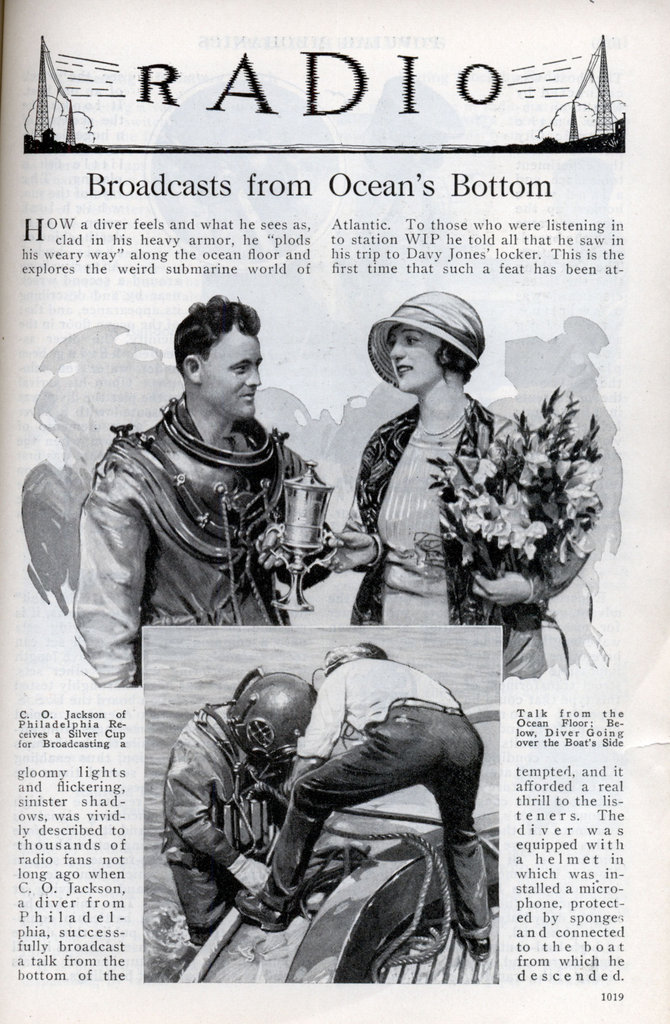 HOW a diver feels and what he sees as, clad in his heavy armor, he “plods his weary way” along the ocean floor and explores the weird submarine world of

gloomy lights and flickering, sinister shadows, was vividly described to thousands of radio fans not long ago when C. O. Jackson, a diver from Philadelphia, successfully broadcast a talk from the bottom of the Atlantic. To those who were listening in to station WIP he told all that he saw in his trip to Davy Jones’ locker. This is the first time that such a feat has been at- tempted, and it afforded a real thrill to the listeners. The diver was equipped with a helmet in which was installed a microphone, protected by sponges and connected to the boat from which he descended.

The boat was connected by wire to an amplifier on the Atlantic City pier near which the experiment took place, and a land wire hooked up the pier apparatus with the broadcasting1 station. The first thing that the listeners heard was a swirling, swishing sound, which, it was explained, was the noise of the air currents in the diver’s helmet. The voice at first was weak, but grew stronger, and when the diver had reached bottom, fifty feet below the surface, they heard him say, “On my left I see the wreck of an old boat.

It looks like the skeleton of a huge fish. In it a school of little fish is playing. The rays of the sun, which look green at this depth, shine on their backs.” After walking around a second wreck near by and describing its appearance, and that of the ocean floor in the vicinity, the diver ascended, having been under water ten minutes. Upon his arrival at the pier the diver was presented with a silver cup, as a memento of the occasion when the ocean’s bottom was first described to those on shore direct from the man on the spot. The test was a complete success, and listeners had a variation from the usual programs.

Experimenters have long realized the advantages of the air-core transformer for maximum amplification at a given wave length, but it has heretofore been found impossible to construct transformers of this type that could be depended upon to give uniform and satisfactory results under all conditions. Absorption of atmospheric moisture in untreated coils causes serious losses, and treatment of the coils with gums and resins to remove this difficulty introduces another set of losses equally serious. Now, it is claimed, these difficulties have been overcome by a transformer sealed in a vacuum tube. The coils are thoroughly dehydrated and accurately spaced on ,a glass rod, then inclosed in a tube of high-lead-content glass, evacuated to a high degree and sealed. The initial efficiency of the transformer is thus retained.

One Antenna for Several Sets

By connecting a “coupling-tube unit” devised by U. S. naval radio experts, it is possible to hook several receiving sets onto a common aerial and each set can receive signals on a different wave length without interfering with the other sets. The apparatus has been thoroughly tested and found successful on board the U. S. S. “Colorado”; the ship’s operators copied simultaneously several messages from different stations even while the battleship’s transmitter was in action, thus enabling the vessel to carry on several times the normal amount of business.

The unit includes a resistance so high that the strength of incoming signals is reduced considerably, and it is therefore necessary to use receiving sets with three or four tubes. A radio-frequency step in the form of a trap, which eliminates regeneration, is required and a receiving set using a detector tube. This unit has become part of standard battleship equipment. To the general public this device is also of considerable usefulness as it will eliminate the great number of aerials found on city apartment buildings.