Popular Science
Issue: Dec, 1933
Posted in: Ahead of its time, Radio
4 Comments on Radio Pen writes letters of fire on far-away screen (Dec, 1933) 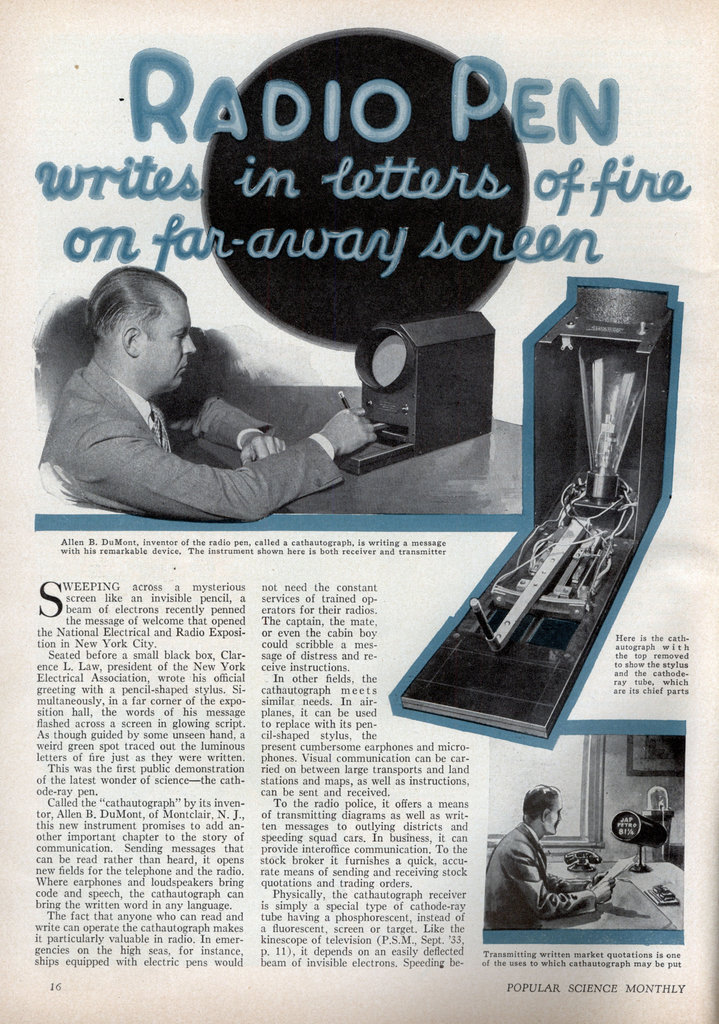 By George H. Waltz, Jr.
CATHODE-RAY tube, having a phosphorescent screen, makes it possible to broadcast to a distance messages that can be read as fast as written

SWEEPING across a mysterious screen like an invisible pencil, a beam of electrons recently penned the message of welcome that opened the National Electrical and Radio Exposition in New York City.

Seated before a small black box, Clarence L. Law, president of the New York Electrical Association, wrote his official greeting with a pencil-shaped stylus. Simultaneously, in a far corner of the exposition hall, the words of his message flashed across a screen in glowing script. As though guided by some unseen hand, a weird green spot traced out the luminous letters of fire just as they were written. This was the first public demonstration of the latest wonder of scienceâ€”the cathode-ray pen.

Called the “cathautograph” by its inventor, Allen B. DuMont, of Montclair, N. J., this new instrument promises to add another important chapter to the story of communication. Sending messages that can be read rather than heard, it opens new fields for the telephone and the radio. Where earphones and loudspeakers bring code and speech, the cathautograph can bring the written word in any language.

The fact that anyone who can read and write can operate the cathautograph makes it particularly valuable in radio. In emergencies on the high seas, for instance, ships equipped with electric pens would not need the constant services of trained operators for their radios. The captain, the mate, or even the cabin boy could scribble a message of distress and receive instructions.

In other fields, the cathautograph meets similar needs. In airplanes, it can be used to replace with its pencil-shaped stylus, the present cumbersome earphones and microphones. Visual communication can be carried on between large transports and land stations and maps, as well as instructions, can be sent and received.

To the radio police, it offers a means of transmitting diagrams as well as written messages to outlying districts and speeding squad cars. In business, it can provide interoffice communication. To the stock broker it furnishes a quick, accurate means of sending and receiving stock quotations and trading orders.

Physically, the cathautograph receiver is simply a special type of cathode-ray tube having a phosphorescent, instead of a fluorescent, screen or target. Like the kinescope of television (P.S.M., Sept. ’33, p. 11), it depends on an easily deflected beam of invisible electrons. Speeding between two sets of metal plates in the base of the tube, this beam can be bent up, down, or to either side merely by varying the voltage on the plates.

At the transmitter, the pencil-shaped stylus is supported on a movable arm. By means of an ingenious sliding pivot, the arm and stylus can be moved in any direction to form even the most complicated letters and figures.

When the stylus is moved in writing a message, sliding contacts on the arm glide over two coiled-wire resistances connected electrically to the two sets of deflecting plates in the tube of the cathautograph. Being arranged at right angles to each other, each resistance is controlled by the movements of the stylus, one by vertical motions, the other by the horizontal.

As each resistance is made shorter or longer depending on the position of the stylus, more or less electricity can pass to the corresponding deflection plates enclosing the beam of electrons in the tube. Since the deflection of the beam one way or the other depends on the voltage of these plates, its motion is identical with that of the stylus.

Speeding through the neck of the tube, this beam then strikes the special phosphorescent screen of the cathautograph. As the electrons in the beam bombard the screen, a glowing spot appears and as this moves it leaves a fiery trail of phosphorescent lines and letters.

In the present model some ten words can be seen on the screen before the glow of the first line begins to fade. As the eleventh word is written, the first word disappears and a new word can be written in its place. However, by altering the design of the screen the inventor claims that it can be made to hold its glow even longer.

Inspecting one end of a simple two-way cathautograph system of the wired type, you would notice that the combined receiver and transmitter closely resemble a theatrical spotlight. At the top, mounted like the spotlight lens, you would find the phosphorescent screen of the cathode-ray tube receiver. Below this, projecting forward, you would notice the writing stylus and the movable arm.

To write a message, you would instinctively pull the stylus toward you to place it in a normal writing position. This would operate an automatic call signal at the distant receiver. At the same time, a brilliant green spot would appear on your screen and a similar spot also would glow on the screen of the second instrument.

Using the stylus just as you would a pen or pencil, you would write the first word of your message. So free would be the motion of the stylus that you could write in your natural hand.

Following the movements of the stylus like a magic ball of fire, the green spot of light on the distant screen, as well as the one on your own, would trace out each letter just as it was formed. When you would lift your stylus at the end of each word, the glowing spot would disappear only to reappear again some distance away when the stylus was lowered at the beginning of another word.

As the stylus at the other transmitter would be moved in penning the reply, the glowing spot on your screen would slowly and deliberately trace out letters, words, and sentences in glowing script. In time, its luminous trail would fade and new words would appear. Finally, the script would stop and the red light on your receiver panel would go out, telling you that the message *was finished.

The New York demonstration of the cathautograph marked the end of a long series of experiments. Now, its inventor is working on a method of making a permanent record of the luminous writing.