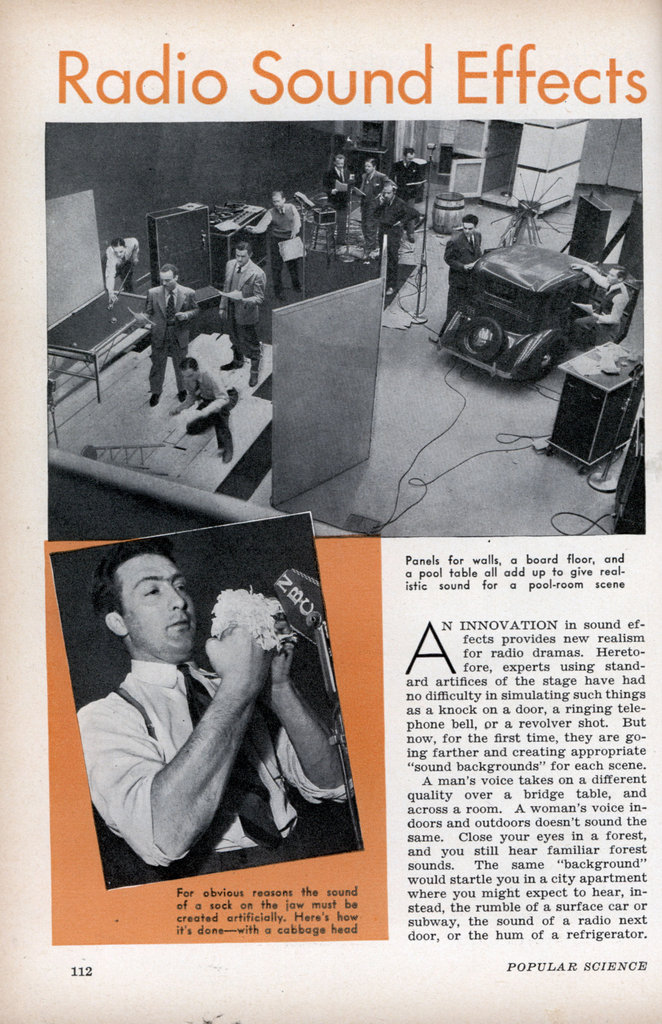 AN INNOVATION in sound effects provides new realism for radio dramas. Heretofore, experts using standard artifices of the stage have had no difficulty in simulating such things as a knock on a door, a ringing telephone bell, or a revolver shot. But now, for the first time, they are going farther and creating appropriate “sound backgrounds” for each scene. A man’s voice takes on a different quality over a bridge table, and across a room. A woman’s voice indoors and outdoors doesn’t sound the same. Close your eyes in a forest, and you still hear familiar forest sounds. The same “background” would startle you in a city apartment where you might expect to hear, instead, the rumble of a surface car or subway, the sound of a radio next door, or the hum of a refrigerator.

In a sound movie, it doesn’t matter if gangsters talking in a car sound exactly like gangsters conversing in a woodland hideout, for the picture itself supports the illusion. But in a radio drama, everything depends solely on what you hear.

Hence come stunts that have never been tried before in a radio studio. In a recent NBC experiment at Hollywood, Calif., the director wheeled an automobile into the studio and had his actors talk right in it. For a pool-room scene in a small western town, he laid wooden planks on the studio floor, built walls of paneling to give the effect of talking in a room, and set up a pool table where sound-effects men, doubling for actors, played pool with real cues and balls. Cowboy players wore boots with spurs that jingled as they walked. They spoke at some distance from the microphone except in scenes calling for close-ups. In all, the show contained 150 different sound effects, from birds singing outdoors to the creak of saddle leather for a scene in which members of a posse dismounted from their horses.

In the new technique, which is expected to spread, each “background sound effect” is carefully worked out with chalk on a blackboard, and engineers often take full advantage of as many as nine microphone outlets.