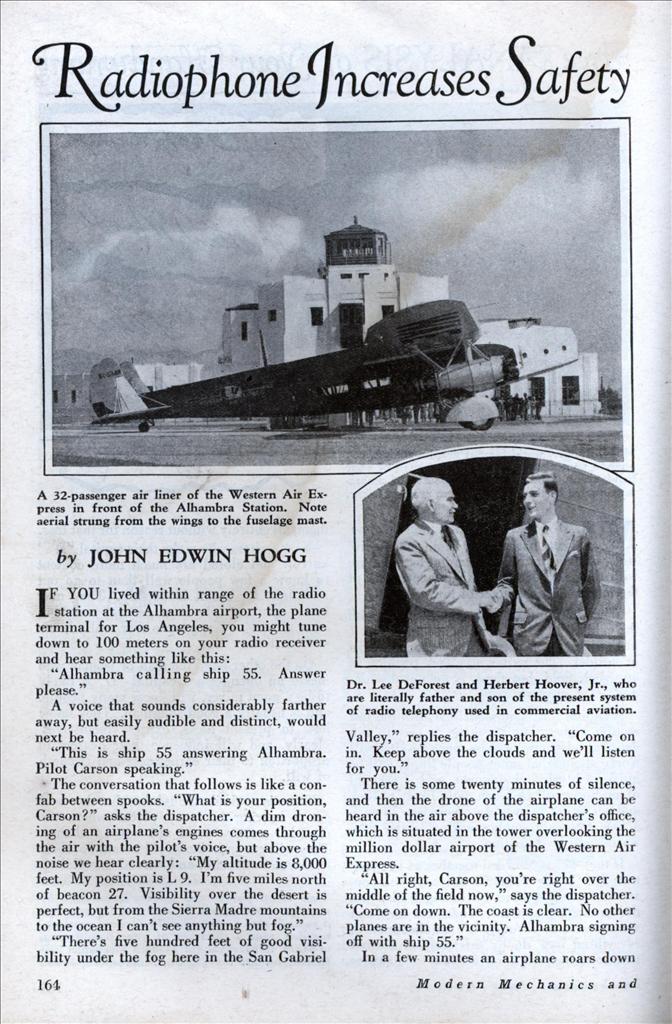 Thanks to the radio telephone developed for use by airplanes in experiments conducted by Herbert Hoover, Jr., pilots on all modern air lines can now learn every fifteen minutes the exact condition of the weather along their routes.

IF YOU lived within range of the radio station at the Alhambra airport, the plane terminal for Los Angeles, you might tune down to 100 meters on your radio receiver and hear something like this: “Alhambra calling ship 55. Answer please.”

A voice that sounds considerably farther away, but easily audible and distinct, would next be heard.

The conversation that follows is like a confab between spooks. “What is your position, Carson?” asks the dispatcher. A dim droning of an airplane’s engines comes through the air with the pilot’s voice, but above the noise we hear clearly: “My altitude is 8,000 feet. My position is L 9. I’m five miles north of beacon 27. Visibility over the desert is perfect, but from the Sierra Madre mountains to the ocean I can’t see anything but fog.”

“There’s five hundred feet of good visibility under the fog here in the San Gabriel Valley,” replies the dispatcher. “Come on in. Keep above the clouds and we’ll listen for you.”

There is some twenty minutes of silence, and then the drone of the airplane can be heard in the air above the dispatcher’s office, which is situated in the tower overlooking the million dollar airport of the Western Air Express.

“All right, Carson, you’re right over the middle of the field now,” says the dispatcher. “Come on down. The coast is clear. No other planes are in the vicinity. Alhambra signing off with ship 55.”

In a few minutes an airplane roars down out of the fog, sailing over house tops and trees towards the airport. Its lights dip gracefully, and it is down—safely on the aviation field. The radio telephone has removed the danger from an airplane landing that would have been extremely hazardous a year ago.

Similar conversations between pilots in the air and the various Western Air Express fields are to be heard during almost any hour of the day or night. The ships may be moving between Alhambra and Kansas City, to and from Salt Lake City, Agua Caliente, Mexico, San Francisco, El Paso, Dallas, or over any of the air lines that radiate from Alhambra like the spokes of a half wheel.

Herbert Hoover, Jr., son of the nation’s chief executive, is chief engineer of the Western Air Express radio service, and is directly in charge of communications. For the past year he and his staff of radio-trained assistants have been at work conducting a series of experiments that have made radio and aviation history.

As a result of his labors every plane of the Western Air Express is now equipped with two-way radio telephones. The whereabouts of every airplane in the company’s vast network of western air lines is known during every minute of their flights. Every pilot of the various lines, while in the air, is constantly within “speaking distance” of his home airport, of weather stations, and of terminals, and intermediate fields. If another plane of the Western Air Express is ever forced down, every office of the entire system would know about it almost instantly. They would know almost the exact spot at which such a ship makes contact with the ground. Gone are the days of the “needle-in-the-hay-stack-hunts” for aviators “down in the rough”, as in the case of Maurice Graham, famous mail pilot.

Finding and rendering assistance to the radio telephone-equipped airplane is placed in the class with answering the “S. 0. S.” call of an ocean ship, with her latitude and longitude known to the rescue ships. Radio telephony gives aviation an entirely new set of values for weather science. The danger of collision between airplanes in the air is virtually eliminated. Pilots are no longer forced to rely wholly upon their own judgment, and aerial passengers are given a new sense of security in the safety and reliability of modern air line service.

A transport pilot has plenty to occupy his time and attention when in the air. Thus, out of necessity, conversations with the dispatcher are rendered in the simplest possible terms. The pilot, in reporting his position as “L 9”, is using a code language developed for the purpose. The maps of the air routes are all divided up into squares, and these squares are designated in the manner of a city map. Alphabetic letters indicate distances on the map north and south, and the numbers represent distances east and west. Thus, when a pilot reports his position as “K 4”, “G 2”, “B 14”, or whatever the designation may be, the location is as definite to the dispatcher as if the pilot were present, and pointing out a location on a map on the wall. The beacon lights are all designated by number, and flash their own identifications to pilots in the air. This gives a very definite location when a pilot reports in to say that he is five miles north of beacon 27.

Tremendously increased value to the science of aerography is given to aviation by the development of two-way radio telephony. All pilots of the Western Air Express receive their weather reports every fifteen minutes. Every detail of every weather condition along their routes of flight is revealed to pilots in the air almost as fast as such weather conditions are known to the aerographers at the various ground stations. It is no longer possible for a pilot to fly blindly into adverse weather conditions. He is warned of dangerous storms, and if the circumstances warrant it, he sets his ship down to avoid disaster.

While radio telephony would now make it possible for Western Air Express pilots to be at all times subject to the orders of officials of the company, no such orders are ever given to a pilot in the air. The company employs only such pilots as are capable of taking complete command of a ship. Each pilot is considered to have the same authority that a captain has on a ship at sea. The company may advise him, warn him of dangerous weather, or talk to him at all times, as the traffic manager might talk to him in the home office. But all decisions concerning “set downs” for bad weather, emergency landings and similar things, are left exclusively to the pilot’s judgment after he is advised of conditions by radiophone. He alone is the man responsible.

Innumerable incidents might be cited to prove the incalculable boon that radio telephony has been to pilots of the Western Air Express. Not long ago, Pilot Klotz, coming into Alhambra from Salt Lake City with the night air mail, was warned of a fog condition that temporarily rendered a safe landing virtually impossible at the local field. A neighboring airport was free from fog at the time, and Klotz was directed to it by radio phone. The mail truck was sent to the field in advance of his landing at the other field. Thus the radio telephone not only made it possible for the pilot to land without danger, but also avoided delay in the mails.

Again, very recently, Pilot Bert Cox, coming into Los Angeles with a load of passengers from San Francisco, encountered a storm condition that he regarded as dangerous. Without radio communication he’d have had no alternative but to set his ship down at the nearest emergency airport. But by calling the Alhambra dispatcher on the radio telephone he was promptly given instructions for flying around the storm. He arrived on schedule with perfect safety, and to the company’s credit for maintaining dependable service.

The radio telephone is a tremendous convenience to the relatives and friends of passengers traveling by air. Persons who desire to meet passengers at the various air terminals have only to call the terminal by telephone to receive detailed information concerning the location of the plane and the time at which it will arrive.

Along its various air lines the Western Air Express maintains a number of so-called flag stops. These are points at which air liners do not regularly stop, but where stops will be made to pick up passengers or to set them down. Smoke signals and flares were formerly employed to bring a pilot but of the sky, but radio telephone now eliminates such primitive methods. Pilots receive instructions by radio whenever there are passengers waiting to be picked up at intermediate ports.

In the traffic tower at the Alhambra airport, the handling of aerial traffic is now in the hands of a former railroad dispatcher, Mr. A. C. Hall. The mechanics of air line dispatching are precisely the same as those long in use in railroading, with certain modifications made for different demands. The former railroad dispatcher is employed for his technical knowledge of the subject, but he is advised in his actions and duties by a qualified transport pilot always on duty in the traffic tower. The pilot is there because of his expert knowledge of aerial conditions, and to advise the dispatcher concerning conditions upon which only a pilot would be qualified to advise other pilots in the air.

Another highly important function of the radio telephone is to relieve aviation of the danger of collisions in the vicinity of airports, particularly during the hours of traffic peaks. At the Alhambra airport, for example, aerial traffic is at its peak load between 7 and 8 o’clock in the evening. During that hour planes are arriving and departing from all parts of the United States and Mexico, and it is nothing unusual for two or three incoming planes to arrive over the field when one plane is about to take off.

Collision Danger Averted The danger of collisions would be very great but for the fact that the radio telephone now gives the dispatcher complete command of the situation. Under such circumstances two or more planes may be ordered to remain in the air while another lands or takes off. The dispatcher handles such situations according to the circumstances, and in an orderly fashion. Left to the various pilots, confusion and danger might very easily result in the vicinity of busy airports.

Radio compass and radio beacon experiments are now also going forward at the Alhambra airport. A radio beacon is already in operation to inform pilots when they’re over the field, even during conditions of obscured visibility. Aviators approaching the field come within its sphere of influence twenty miles away. The beacon impulses are recorded by an instrument with an oscillating pendulum. These impulses become stronger as the field is approached, and turn on a colored light on the pilot’s instrument board when the plane gets over the field.

A radio compass has now been developed with which the pilot can take bearings on any station transmitting any kind of signals, either broadcast or code. By determining the directions of two or more broadcast stations, the pilot can chart out his own position, which will be at the point of intersection of the directions from which the signals come.