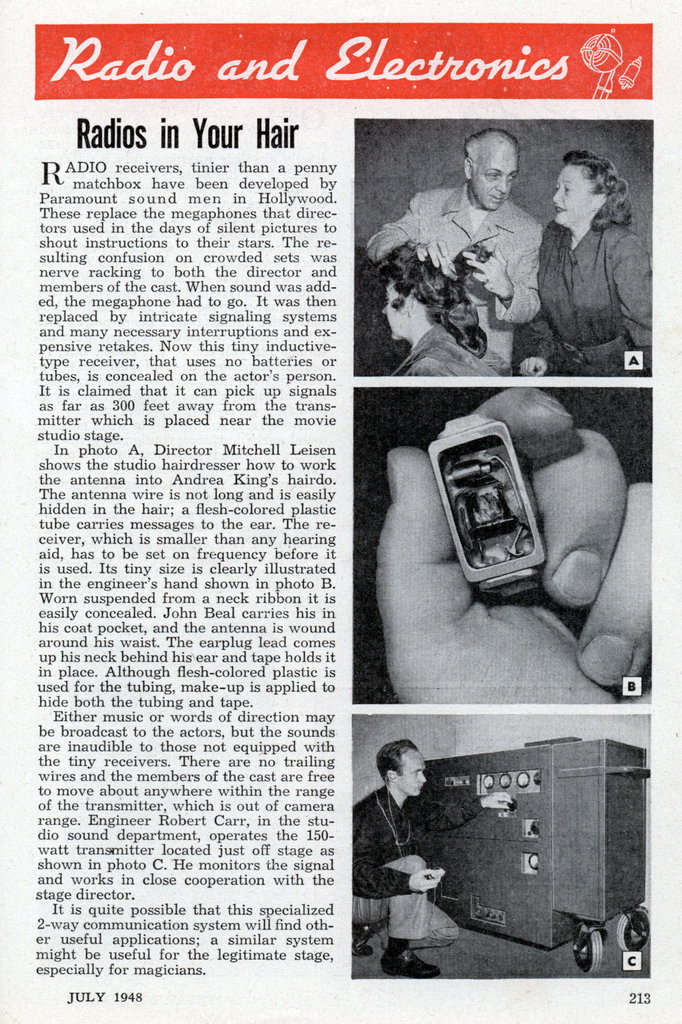 Radios in Your Hair

RADIO receivers, tinier than a penny matchbox have been developed by Paramount sound men in Hollywood. These replace the megaphones that directors used in the days of silent pictures to shout instructions to their stars. The resulting confusion on crowded sets was nerve racking to both the director and members of the cast. When sound was added, the megaphone had to go. It was then replaced by intricate signaling systems and many necessary interruptions and expensive retakes. Now this tiny inductive-type receiver, that uses no batteries or tubes, is concealed on the actor’s person. It is claimed that it can pick up signals as far as 300 feet away from the transmitter which is placed near the movie studio stage.

In photo A, Director Mitchell Leisen shows the studio hairdresser how to work the antenna into Andrea King’s hairdo. The antenna wire is not long and is easily hidden in the hair; a flesh-colored plastic tube carries messages to the ear. The receiver, which is smaller than any hearing aid, has to be set on frequency before it is used. Its tiny size is clearly illustrated in the engineer’s hand shown in photo B. Worn suspended from a neck ribbon it is easily concealed. John Beal carries his in his coat pocket, and the antenna is wound around his waist. The earplug lead comes up his neck behind his ear and tape holds it in place. Although flesh-colored plastic is used for the tubing, make-up is applied to hide both the tubing and tape.

Either music or words of direction may be broadcast to the actors, but the sounds are inaudible to those not equipped with the tiny receivers. There are no trailing wires and the members of the cast are free to move about anywhere within the range of the transmitter, which is out of camera range. Engineer Robert Carr, in the studio sound department, operates the 150-watt transmitter located just off stage as shown in photo C. He monitors the signal and works in close cooperation with the stage director.

It is quite possible that this specialized 2-way communication system will find other useful applications; a similar system might be useful for the legitimate stage, especially for magicians.