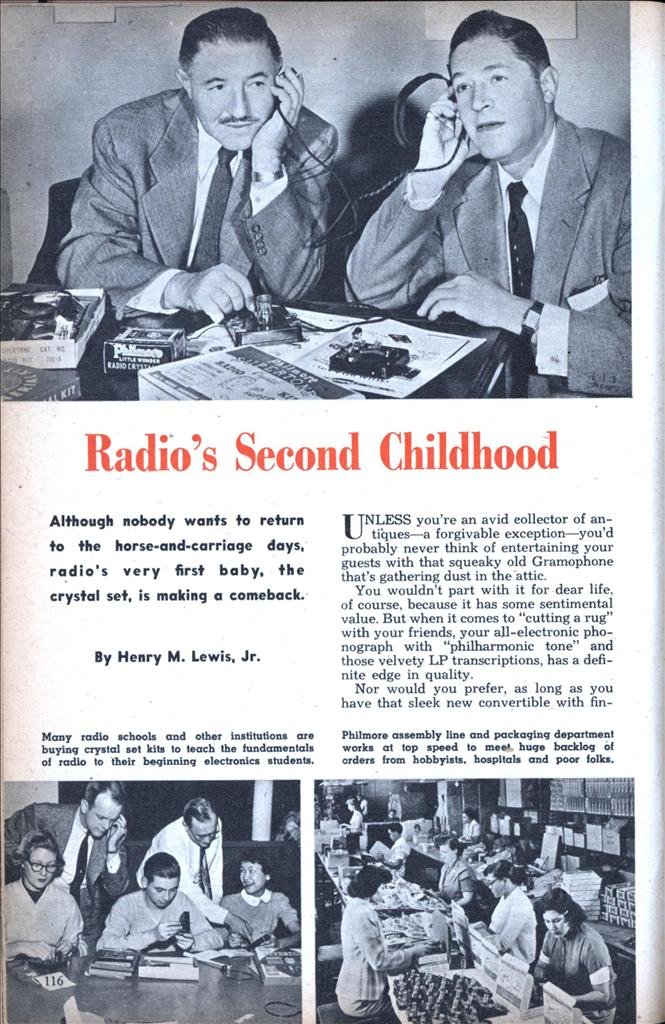 Although nobody wants to return to the horse-and-carriage days, radio’s very first baby, the crystal set, is making a comeback.

UNLESS you’re an avid collector of antiques—a forgivable exception—you’d probably never think of entertaining your guests with that squeaky old Gramophone that’s gathering dust in the attic.

You wouldn’t part with it for dear life, of course, because it has some sentimental value. But when it comes to “cutting a rug” with your friends, your all-electronic phonograph with “philharmonic tone” and those velvety LP transcriptions, has a definite edge in quality.

Nor would you prefer, as long as you have that sleek new convertible with fin- gertip steering and power brakes in your garage, to put on goggles and a duster for a rocky Vide in an old-fashioned Reo. Unless, of course, you happen to share singer Jimmy Melton’s famous devotion to antique autos.

These ancient artifacts served your parents and your grandparents well, but as far as you’re concerned, they can rest in peace. You’ll take their streamlined progeny.

Not so with another of mankind’s modern miracles, however.

Radio, it seems, is in the throes of a second childhood. The “cat’s whisker” is coming back with a bang! Or better—a boom. Yes, the crystal set business is booming again.

This information comes from no less an authority than the Messrs. M. L. and M. S. Granat of the Philmore Manufacturing Company of New York, the world’s largest maker of the primitive little coils and ticklers that first plucked sounds out of the ether and funneled them into the earphones of an awed citizenry more than a quarter-century ago. This was about the time Rudy Vallee was still singing through a megaphone and Harry Horlick’s A. & P. Gypsies were the toast of the music world.

Mr. M. L. Granat, president, isn’t a bit worried over inviting competition when he tips his hand about the profitable status of his crystal set business today. A confident little man with beady black eyes that literally spark with enthusiasm when he’s talking about his lofty survival in the field, he makes some interesting observations on a business nearly everyone thought went out with the nickel beer, if not earlier.

“In 1920,” points out Mr. Granat with the self-assured air of a man who has outwitted progress, “there were more than 300 manufacturers of crystal sets in the United States. Today, a couple maybe. We sur- vived that competition. So what’s to worry!

“You know something?” Mr. Granat went on, waving a sheaf of orders. “We’ll move more than 150,000 sets this year. And would you believe it, most people don’t even know you can buy a crystal radio today?” Still, he insisted that the future is very rosy indeed. And, oddly enough, he would have it known this outlook is not threatened but enhanced by the latter-day science of electronics.

“Business is up 35 to 40 per cent since 1950,” said Mr. Granat, pointing to a rising line graph on the wall of his modestly furnished New York office. “And you know what we got to thank for a good deal of it? Electronics! The Goliath of modern industry!”

Mr. Granat went on to explain that everybody from six to 60, it seems, is elec-tronics-minded these days. The government is encouraging careers in this field, new schools are popping up all over the country, Captain Video is taking the play away from Hopalong Cassidy in the small fry league—and all these things mean money in the bank for the Messrs. Granat.

How? Because all these people who want to soak up a technical knowledge of electronics need—yep, you guessed it—one of Mr. Granat’s crystal sets to take their baby steps.

The crystal set employs the simplest of all radio circuits, Mr. Granat pointed out, and this means a land office business in his kits that contain all the elements necessary for building one. as well as his ready made sets.

“Northeastern University in Boston is one of my best customers,” he admits jubilantly, appending a long list of lesser known schools and radio institutes that gobble up the crystal sets as fast as they can be manufactured and shipped off to distributors.

“Even the kids are getting into the act,” purred the other Mr. Granat, fondling a stack of fan mail from embryonic wizards all over the United States.

Not only can you buy them singly, but the Messrs. Granat are selling them in case lots. Recently, the Louisville Junior Achievement Organization bought a batch for its members and they were so popular, re-orders were necessary. The Physiological Institute of Washington and Miami buys them in quantity, too, for use in occupational therapy. Patients are given kits to assemble to develop the use of their fingers following paralytic injury.

Hospitals are full of crystal set devotees. Patients use their bed springs as aerials and listen to their favorite programs through headphones without disturbing other patients. One hapless inmate of a crowded ward in New York’s Bellevue Hospital wrote the Messrs. Granat that “due to the number of patients, it is necessary to place the beds of ‘cast cases’ like myself down the center of the floor, thus making no electrical outlets available.” A crystal set saved the day for him.

Crystal sets are popular in the nation’s prisons, too, according to the Messrs. Granat.

“They only cost a few dollars, which the inmates can afford, and the cell bars make fine aerials,” observed Mr. Granat, tying together two very practical points.

But aside from the vast market among students and hobbyists interested in the technical side of radio, it’s the poor people throughout the length and breadth of the land that keep the Granat brothers working overtime to produce enough crystal sets.

“You’d be surprised how many people there are who can’t afford a new radio. People who can’t even afford to have electricity,” Mr. Granat pointed out. “Farmers, the little people who gather the crops down south, the little man with the pushcart on Avenue A, the fellows who live on barges and scows who don’t have any electricity even if they could afford it. . . .

“If I can make them happy and contented with my little crystal sets, this is my mission in life,” he added poignantly. The price range, he emphasized, was $1.15 to $3.15, the latter sets being complete with earphones.

“And,” Mr. Granat went on, “for this, they get the ultimate in high fidelity reception, mind you.” He explained that the crystal set delivers the purest form of high fidelity reception because there are no interposed elements to distort the quality of the sound as there are in the complex modem radios. The broadcast signal reaches the listener in its original form.

For those who can’t even afford the “luxury” of one of Mr. Granat’s assembly line crystal sets, making one is the last word in simplicity. Provided, of course, you can rummage a pair of headphones from your own or someone else’s attic.

In fact, you can even build a set without investing in a galena crystal ($.20) or a “cat’s whisker” ($.45), if the wolf is really snapping at your heels. The results won’t be as good, but a safety pin and a common carborundum-coated razor blade will do the same job. American GI’s in Italy during the war built crystal sets like this for their own amusement between battles.

The crystal circuit is so simple that even a child of 12 can build his own set. An aerial carries the electrical impulses from the radio transmitter to the tuning coil of the set. From the head of the coil another single wire carries them to the detector, or “cat’s whisker.” When the “cat’s whisker” is in contact with a sensitive spot on the galena crystal, the incoming signal is relayed to the earphones. From here, the current passes through another wire connected to the foot of the tuning coil which is grounded to a radiator or water pipe.

For an aerial, a bed spring or a wire screen will do but there’s still no substitute for an outdoor installation—a length of copper aerial wire strung between glass insulators—if you should decide to roll back the years for the fun of it.

The Messrs. Granat, of course, would prefer that you frown upon ingenuity and run, not walk, to your neighborhood radio shop for one of their ready-made receivers, or even a kit.