Modern Mechanix
Issue: Jan, 1929
Posted in: Television
2 Comments on RADIOVISION for All (Jan, 1929) 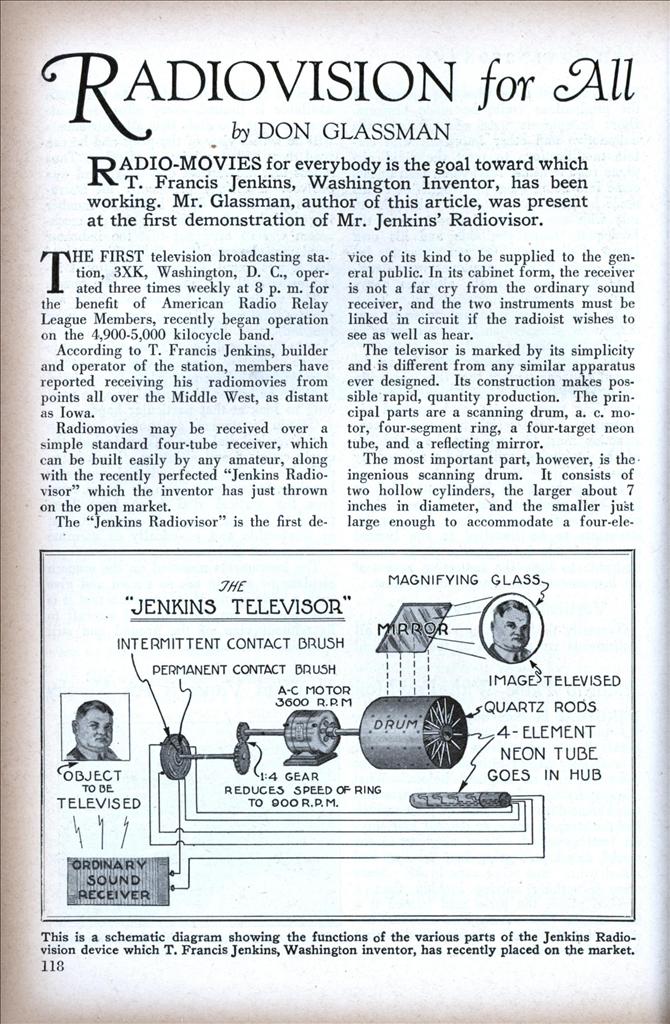 RADIO-MOVIES for everybody is the goal toward which T. Francis Jenkins, Washington Inventor, has been working. Mr. Glassman, author of this article, was present at the first demonstration of Mr. Jenkins’ Radiovisor.

According to T. Francis Jenkins, builder and operator of the station, members have reported receiving his radiomovies from points all over the Middle West, as distant as Iowa.

Radiomovies may be received over a simple standard four-tube receiver, which can be built easily by any amateur, along with the recently perfected “Jenkins Radiovisor” which the inventor has just thrown on the open market.

The “Jenkins Radiovisor” is the first de- vice of its kind to be supplied to the general public. In its cabinet form, the receiver is not a far cry from the ordinary sound receiver, and the two instruments must be linked in circuit if the radioist wishes to see as well as hear.

The televisor is marked by its simplicity and is different from any similar apparatus ever designed. Its construction makes possible rapid, quantity production. The principal parts are a scanning drum, a. c. motor, four-segment ring, a four-target neon tube, and a reflecting mirror.

The most important part, however, is the ingenious scanning drum. It consists of two hollow cylinders, the larger about 7 inches in diameter, and the smaller just large enough to accommodate a four-element neon tube. The small cylinder is really the hub to the larger, and the connecting spokes are solid quartz rods which connect liny holes in the rim and the hub. There are 48 such rods and they serve to transmit rays of light through an aperture in the wooden cabinet and onto the overhead reflecting mirror.

The special neon tube has targets about one-quarter of an inch square, as well as a common element which runs parallel to the inclosing glass wall. Each of these targets supplies the pulsating light flashes to corresponding series of apertures in the drum, which rotates on a direct shaft from the motor at 3,600 r. p. m.

The other side of the motor attaches to a gear which reduces the speed of the connecting shaft to one-fourth that of the drum, or 900 r. p. m. At this end of the shaft is the brush-contact disc found on other television receivers. The function of this brush is to rotate in step with a scanning disc at the transmitting end. It connects the circuit, one after the other, through four wires which attach themselves to the four targets in the neon tube. The brush disc has four segments and is in contact with two brushes. One brush keeps continuous electrical contact, while the other completes the circuit intermittently.

The reflecting mirror is mounted at an angle of 45 degrees. The image is enlarged by an ordinary magnifying glass about 10 inches in diameter. The input posts of the radiovisor are connected to the last audio amplifier tube of a receiver.