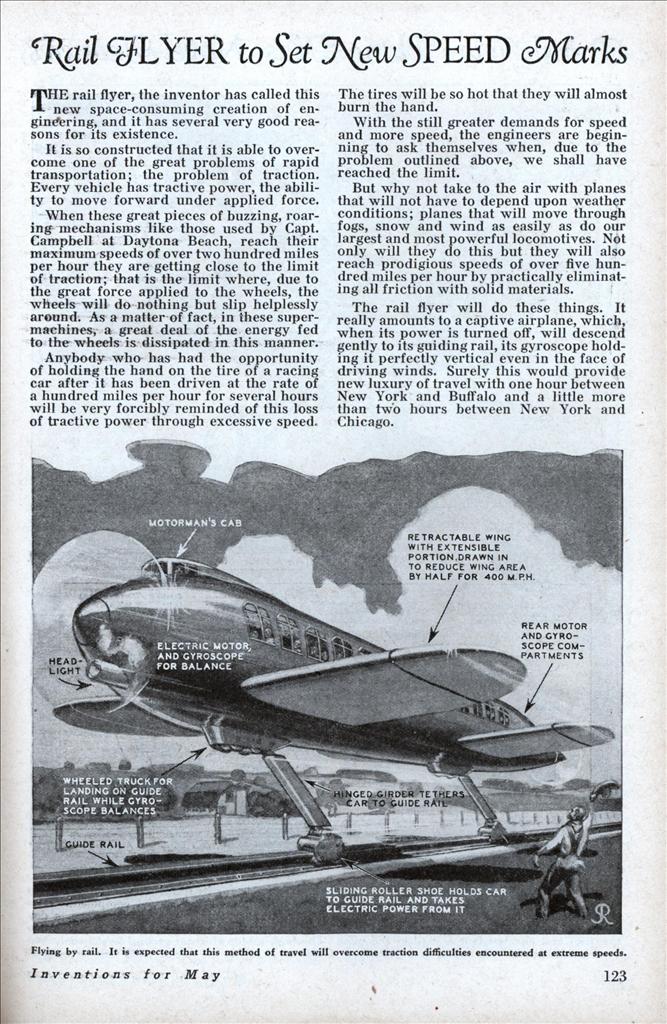 THE rail flyer, the inventor has called this new space-consuming creation of engineering, and it has several very good reasons for its existence.

It is so constructed that it is able to overcome one of the great problems of rapid transportation; the problem of traction. Every vehicle has tractive power, the ability to move forward under applied force.

When these great pieces of buzzing, roaring mechanisms like those used by Capt. Campbell at Daytona Beach, reach their maximum speeds of over two hundred miles per hour they are getting close to the limit of traction; that is the limit where, due to the great force applied to the wheels, the wheels will do nothing but slip helplessly around. As a matter of fact, in these super-machines, a great deal of the energy fed to the wheels is dissipated in this manner.

Anybody who has had the opportunity of holding the hand on the tire of a racing car after it has been driven at the rate of a hundred miles per hour for several hours will be very forcibly reminded of this loss of tractive power through excessive speed.

The tires will be so hot that they will almost burn the hand.

With the still greater demands for speed and more speed, the engineers are beginning to ask themselves when, due to the problem outlined above, we shall have reached the limit.

But why not take to the air with planes that will not have to depend upon weather conditions; planes that will move through fogs, snow and wind as easily as do our largest and most powerful locomotives. Not only will they do this but they will also reach prodigious speeds of over five hundred miles per hour by practically eliminating all friction with solid materials.

The rail flyer will do these things. It really amounts to a captive airplane, which, when its power is turned off, will descend gently to its guiding rail, its gyroscope holding it perfectly vertical even in the face of driving winds. Surely this would provide new luxury of travel with one hour between New York and Buffalo and a little more than two hours between New York and Chicago.