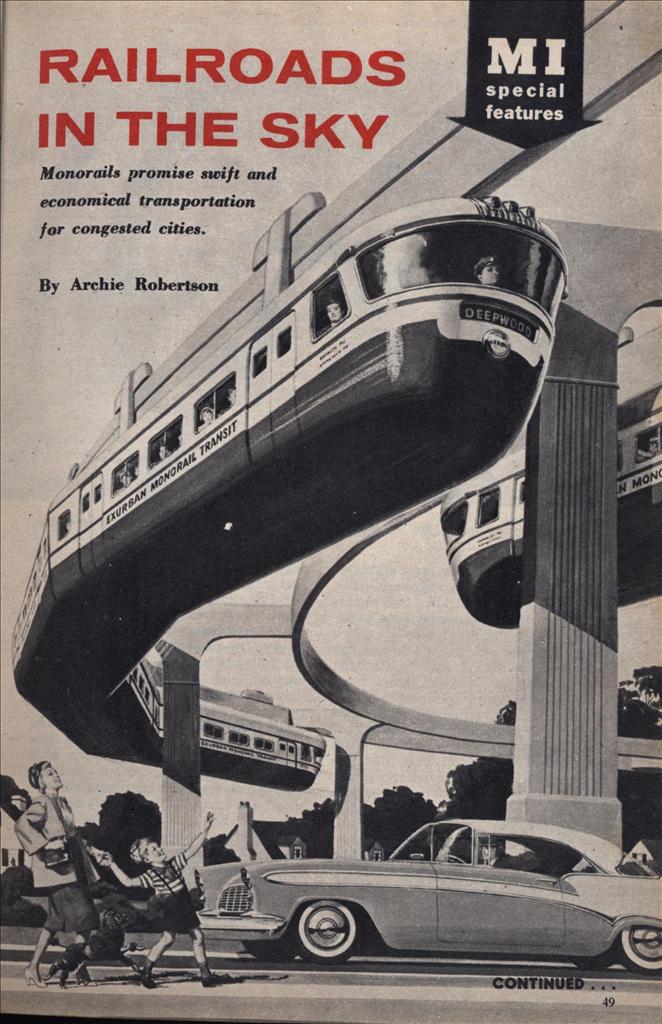 RAILROADS IN THE SKY

HERE’S a brand-new way of travel for American commuters—the overhead, suspended train. In a monorail coach, light and roomy as a luxurious airliner and faster than a surface train, you will skim along above the crowded downtown streets, looking with thankfulness at your escape from a misery of crawling cars, traffic fumes, honking horns, whistling cops and squealing brakes. Whether you’re just going downtown to shop or commuting to work 50 miles from your home, a monorail will take you where you’re going two or three times as fast as conventional surface transportation.

The Houston, Texas pilot monorail that opened for demonstration purposes last winter is only 970 feet long, and passengers are allowed to ride free. But in other respects, it is very much like the full-length lines which its backers plan to build soon.

The single “rail” of the Skyway, as the Houston line is called, is a 30-inch pipe supported by 30-foot towers set at 50-foot intervals. At one end of the present line the passengers ascend to a loading platform; at the other the rail declines to bring the coach to ground level. The passenger car hangs below the rail; above it ride the two 305-hp engines, the control equipment and driver’s seat. The unit rides on eight pneumatic-tired wheels; 16 rubber guide wheels keep it in place on the rail. People who have taken the free trip report a nearly silent ride with little sense of motion. The coach has a Fiberglas body and large plexiglass windows; the effect inside is light, airy and cheerful. Seats along the sides accommodate 60 passengers and 50 more can stand comfortably.

The reasons for the monorail can be summed up briefly. Six million new cars coming along every year add to downtown traffic congestion which already causes an economic loss estimated in the billions. Conventional elevated roads and railroads block light and air from the streets below. Subways and surface railroads lose money. And aircraft aren’t yet ready for the job of carrying the public to work and back.

In several major population centers monorails are much closer to construction than the general public realizes. Their safety and dependability have already been proved in steel milk and other industrial plants, and full-scale plans for passenger-carrying monorails have been drawn for Los Angeles, San Francisco, Montreal, and Washington, D. C. The plan for Los Angeles awaits action by the California legislature, to enable the operating company to issue revenue bonds. It includes a 44-mile line between Fernando and downtown Los Angeles, with ten-car trains having a top speed of 100 mph. Even with 15 stops in this distance, the trains will maintain an average speed of 41 mph. This will make it by far the world’s fastest transit system. (New York subway expresses average only 24 mph.) The Los Angeles monorail system, designed by Gibbs & Hill, a New York engineering firm, will have automatic train control. Trains will berth themselves correctly at each station. Doors will open and close by themselves. The train attendant will ride up front in a plexiglass bubble to watch for possible obstructions, like a tall crane passing below. In this case, of course, he’ll be able to stop the train. Escalators will carry passengers up and down from the street.

One monorail plan eliminates bus-to-train transfers for off-line passengers. You’ll be able to board a bus at your usual corner to start your trip downtown. When the bus reaches its monorail station a steel frame will be lowered from the overhead rail. The bus will drive into it, the frame will lock around it and hoist it up. Without leaving your seat in the bus, you’ll be whisked over congested downtown areas to your destination.

The monorail is highly adaptable. In the Los Angeles plan, for example, it takes a dive underground to operate for two miles as a subway. Out in the country, its single row of pillars can be erected in the grassy, center strip which divides modern, separated expressways and thruways. Edward H. Anson, the vice president of Gibbs & Hill, has sketched a plan for a double loop monorail around the heart of Manhattan, with several cross-town lines to relieve congestion on the East-West streets. At rush hours, these are probably the scene of the nation’s worst traffic snarls with a staggering loss in time and money as a consequence.

Monorail enthusiasts, of course, do not claim that theirs is the only answer to the traffic problem. More thruways and expressways are needed, all engineers agree. But expressways and thruways fill up with new traffic jams almost as fast as they are built. The New Jersey Turnpike is now carrying the volume of traffic which it was expected to carry some 30 years hence. Also, deluxe new highways always bring more cars into town every day, to be parked—somewhere. And they cost a lot to build, not only because of their massive construction but because expensive property must be condemned to secure the right-of-way for a city freeway. To build one mile of modern automobile freeway costs from $4,000,000 to $6,000,000; a monorail line of the same length costs only $500,000 to construct.

When it comes to the number of people who can ride, the comparison is even more staggering. The monorail train—allowing for ten cars—can easily move about 24,000 passengers per hour, running on a 90-second headway between trains as in the Los Angeles design. Compare that with the mere 6,000-7,000 people who can travel a six-lane highway in private automobile during the same time—if we allow for the national average of about 1-1/2 passengers per car.

It doesn’t look as if we’re going to build many more miles of subway systems or suburban surface lines. Virtually no subways have been constructed since 1940. They cost about four times as much to build as monorails and they lose money, steadily. The New York subway system, the world’s greatest, runs deeper into the red every year as its passenger traffic declines while its fares go up. In general, the same sad story is true of commuters’ trains around New York, Chicago, Philadelphia and other large cities. Almost without exception their managements report that the trains are run at a loss, schedules are being curtailed or service being abandoned altogether.

Highspeed buses, or trains of buses, running on elevated tracks above the city streets have also been suggested. But an elevated roadway, of any kind, has the serious disadvantage of cutting off the light and air from the street beneath it.

Monorails of the present are not remotely like the old elevated railroads. On the Houston line, for example, the pillars are spaced 75 feet apart in a single row. The light, airy structure deprives nobody of sunshine and fresh air. There’s plenty of room for flowers and trees and no occasion for traffic accidents on the surfaces. Operations are quiet—no rumble, roar or clicking ties.

The monorail train isn’t a new invention. It-was proposed in England as early as 1830, and a few years later, a 20-mile line of single rail was built in the West of Ireland. A line was proposed to relieve New York traffic congestion in 1873.

Early monorails, however, were laid on the ground, or erected only a few feet above it, with engines and cars balanced upright on them. Such, for instance, was the famous, four-mile long Peg Leg Railroad in Pennsylvania, which opened in 1878 and unfortunately blew up a year later. The Bicycle Railroad— a similar design—skimmed along near Bellport, Long Island at 60 miles an hour, back in 1892. By 1901 an English monorail between Manchester and Liverpool was hitting 100 mph. In 1915 a monorail, elevated two feet above ground, ran between Bartow and City Island, N. Y. And of course for many years a little monorail car has been shuttling United States Senators underground between their office building and the adjoining Capitol.

The most famous existing monorail, however, is at Wuppertal, .in the Ruhr district of Germany. Nine and a half miles in length, it is a suspended, overbad type—like the new Houston line. It’s been running, without a single fatality among a total of 310,000,000 passengers, since 1902.

“Overhead, upside-down railroad,” though a clumsy phrase, may be a more accurate description of tomorrow’s mass transportation than the word “monorail.” While the Houston line has just one rail, the Gibbs & Hill design for Los Angeles is actually a narrow-gauge railroad, upside-down with the trains suspended from two rails, three feet apart. This split-rail design, engineers point out, makes switching a lot simpler than the single rail and offers other advantages. Rails, for example, can be enclosed inside a longitudinal box girder, treated with acoustic material, and they can rest upon a resilient, sound-deadening bed. Gyroscopes would not be necessary in the split-rail design. Even under stress equivalent to a 70-mph wind, the cars would lean less than 10 per cent from the vertical— less than some surface trains as they round a curve at high speed.

Maintenance costs on the monorail should be low. An enclosed track is safe from rain and snow. Brakes and motors on top of the cars are readily accessible for inspection and repairs.

What will it cost to ride it? According to the Los Angeles plan, the rate may be about 2.8 cents per mile which . compares with an average nationwide cost of 8 cents a mile for operating a privately-owned automobile. And no more than you pay now to ride a bus or train which is tied to earth.