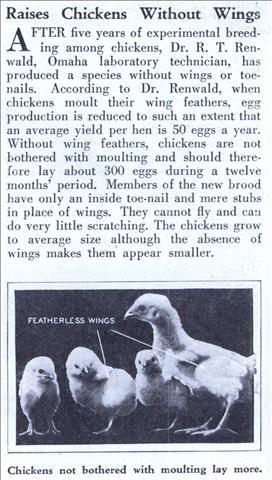 AFTER five years of experimental breeding among chickens, Dr. R. T. Renwald, Omaha laboratory technician, has produced a species without wings or toenails. According to Dr. Renwald, when chickens moult their wing feathers, egg production is reduced to such an extent that an average yield per hen is 50 eggs a year. Without wing feathers, chickens are not bothered with moulting and should therefore lay about 300 eggs during a twelve months’ period. Members of the new brood have only an inside toe-nail and mere stubs in place of wings. They cannot fly and can do very little scratching. The chickens grow to average size although the absence of wings makes them appear smaller.