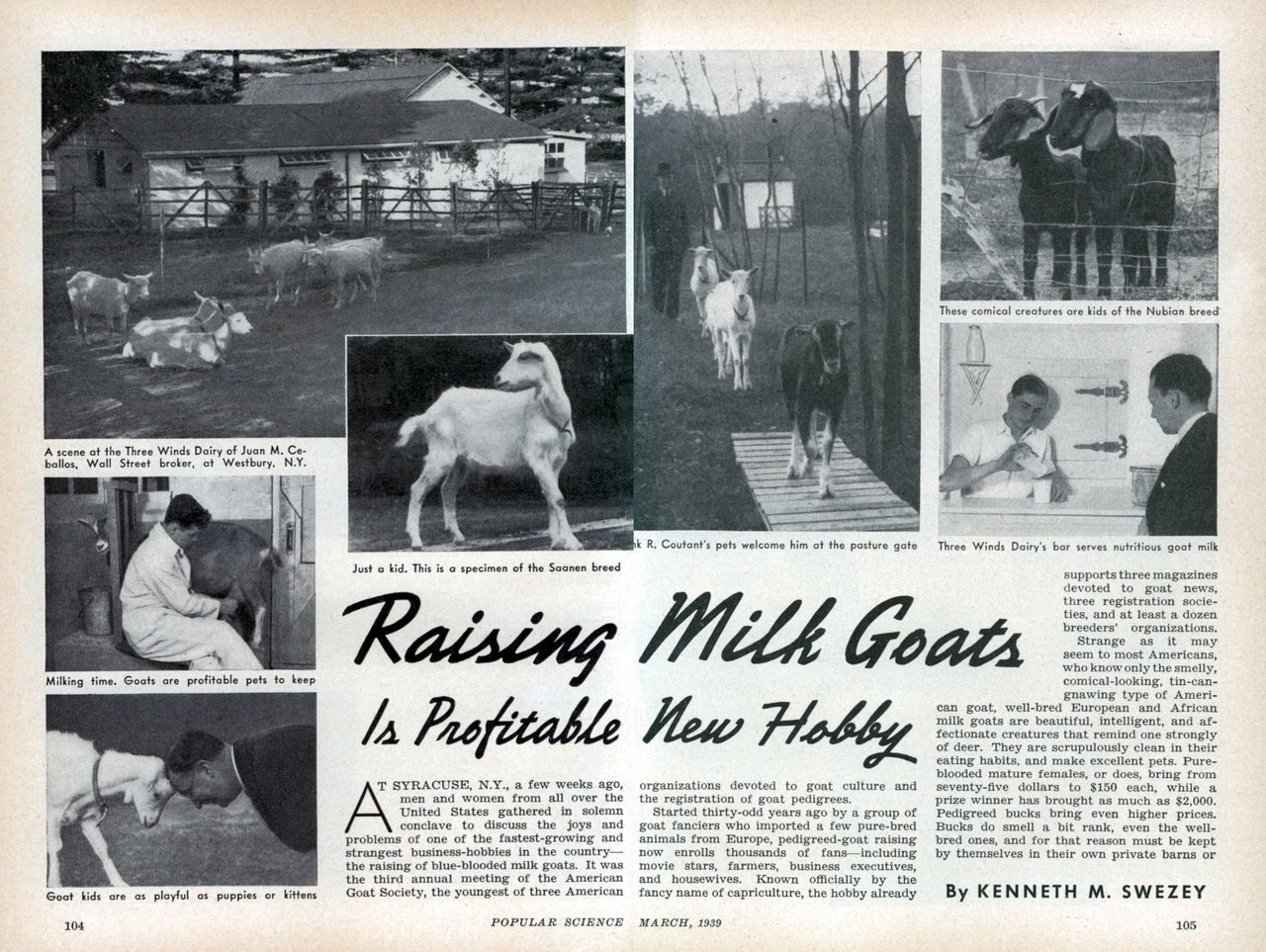 AT SYRACUSE, N.Y., a few weeks ago, men and women from all over the United States gathered in solemn conclave to discuss the joys and problems of one of the fastest-growing and strangest business-hobbies in the countryâ€” the raising of blue-blooded milk goats. It was the third annual meeting of the American Goat Society, the youngest of three American organizations devoted to goat culture and the registration of goat pedigrees.

Started thirty-odd years ago by a group of goat fanciers who imported a few pure-bred animals from Europe, pedigreed-goat raising now enrolls thousands of fansâ€”including movie stars, farmers, business executives, and housewives. Known officially by the fancy name of capriculture, the hobby already supports three magazines devoted to goat news, three registration societies, and at least a dozen breeders’ organizations. Strange as it may seem to most Americans, who know only the smelly, comical-looking, tin-can-gnawing type of American goat, well-bred European and African milk goats are beautiful, intelligent, and affectionate creatures that remind one strongly of deer. They are scrupulously clean in their eating habits, and make excellent pets. Pure-blooded mature females, or does, bring from seventy-five dollars to $150 each, while a prize winner has brought as much as $2,000. Pedigreed bucks bring even higher prices. Bucks do smell a bit rank, even the well-bred ones, and for that reason must be kept by themselves in their own private barns or stables, but does are entirely odorless.

Dogs and cats may make good pets, also, the goat raisers agree, but what other pet than the goat, they argue, can earn its keep? The chief reason for raising goats is really for the milk, which is delicious, rich, healthful, and economically produced. A single goat should produce upward of two quarts of milk a dayâ€”enough to supply an average familyâ€”for nine or ten months of the year. If you buy all its food, its cost of keep is less than ten cents a day. Seven or eight goats may be fed for the cost of feeding one cow. At retail, goat milk sells for from fifteen to sixty cents a quart. Marketing the milk from a herd of from twenty to a hundred goats, one can make a comfortable income.

When goat milk is not used entirely by the owner, it is often sold to hospitals, to invalids, and to families with young children. Although it looks and tastes almost like cow milk, it has special properties which render it particularly good for body building and for correcting certain nutritional difficulties. For one thing, its reaction in the stomach is alkaline, while that of cow milk is acid. It forms a much softer curd, and its fat globules are smaller; therefore it digests more easily. Goat milk is considerably richer in iron, and in vitamins B and C, than milk from even the best Jersey cow. As goats are almost entirely immune to tuberculosis, goat milk is seldom Pasteurized, but is generally sold as “certified,” or highest grade of raw milk.

Besides the income from milk, goat raisers also derive revenue from selling breeding stock, goat cheese, goat candy, goat skins, goat manure, and goat meat. Buck kids, which are not to be raised for breeding, are killed young for meat.

The four most popular breeds of milk goats among American raisers are known as Toggenburg, Saanen, Nubian, and Alpine. The first two are products of hundreds of years of careful breeding in Switzerland. It is claimed that they have a pedigree dating back to the time of Charlemagne, and that the Toggenburg type was the result of crossing native does with wild chamois of the Swiss Alps.

Except that it is smaller and a slightly darker brown, the Toggenburg resembles the white-tailed deer of America. Saanens are similar in build, but pure white. Nubians are large, exotic-looking animals with flop ears and Roman noses, that derive originally from Nubia or Abyssinia; they are sometimes crossed with English goats to make them hardier. Alpines are sturdy, varicolored goats of ancient origin that come from the French Alps.

Goat ranches range all the way from the back-yard farm of the suburban cottager, who keeps several does for the family milk supply, to elaborate dairies, maintaining up to several hundred animals. In the latter, goats are raised under scrupulously hygienic conditions. Barns are immaculate, animals are regularly given blood tests for disease, workers are given thorough medical examinations weekly. All utensils that may touch the milk are sterilized, and each goat’s udder is washed with a germicide before every milking. Milk is constantly checked by a medical examiner for sediment and bacteria.

One of the most scientific of the goat farms is the Three Winds Dairy, at Westbury, Long Island, N.Y., run by Juan M. Ceballos, Wall Street broker. Here seventy-five Saanens and Toggenburgs caper four hours a day in a grassy pasture, and lounge the rest of the time in a scientifically built barn. Ceballos is now experimenting to try to produce an odorless buck, by removing the musk glands.

Although there is little danger of goats competing to any great extent with cows, in the United States, the U.S. Department of Agriculture is actively experimenting with goat breeding in the hope that it may stimulate goat raising as an important animal industry. At its Animal Husbandry Experiment Station at Beltsville, Md., Government scientists are attempting to develop good but less expensive milk producers, by crossing pure Swiss breeds with American goats. If their efforts are successful they will add new impetus to this fast-growing hobby.