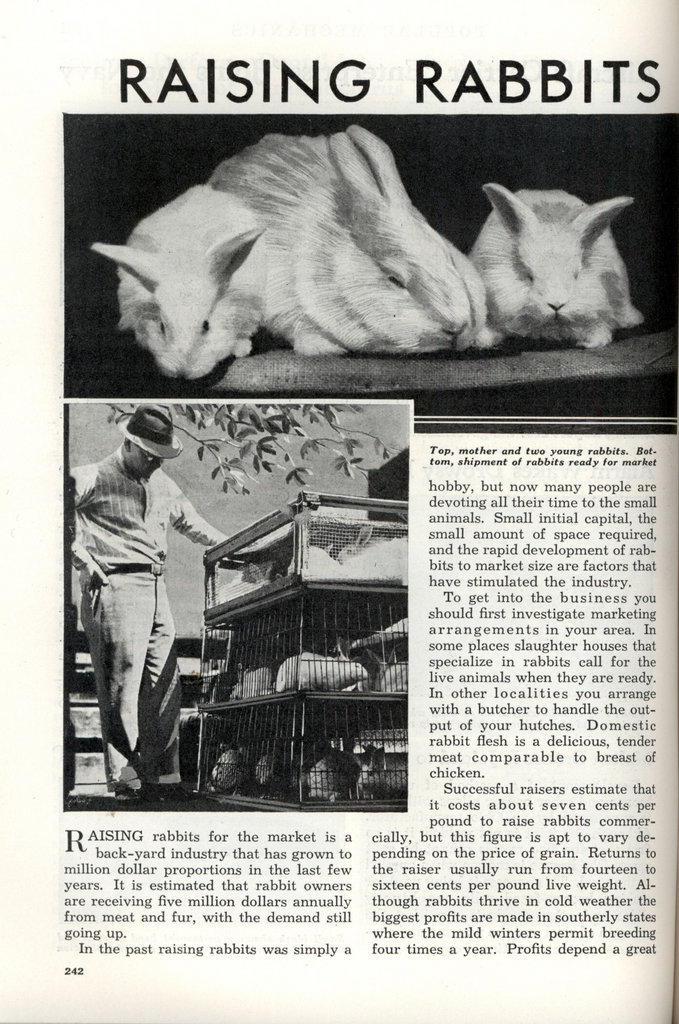 RAISING rabbits for the market is a back-yard industry that has grown to million dollar proportions in the last few years. It is estimated that rabbit owners are receiving five million dollars annually from meat and fur, with the demand still going up.

In the past raising rabbits was simply a hobby, but now many people are devoting all their time to the small animals. Small initial capital, the small amount of space required, and the rapid development of rabbits to market size are factors that have stimulated the industry.

To get into the business you should first investigate marketing arrangements in your area. In some places slaughter houses that specialize in rabbits call for the live animals when they are ready. In other localities you arrange with a butcher to handle the output of your hutches. Domestic rabbit flesh is a delicious, tender meat comparable to breast of chicken.

Successful raisers estimate that it costs about seven cents per pound to raise rabbits commercially, but this figure is apt to vary depending on the price of grain. Returns to the raiser usually run from fourteen to sixteen cents per pound live weight. Although rabbits thrive in cold weather the biggest profits are made in southerly states where the mild winters permit breeding four times a year. Profits depend a great deal upon starting out with a good breed. “Most commercial rabbit men specialize in the white New Zealand rabbit,” says D. Monroe Green, president of the National Rabbit Institute. “This type has a desirable white fur and has been developed by scientific breeding into a fine commercial animal. It commands a higher market price than do varieties that have a lower percentage of usable flesh. A good white New Zealand should have a low set body, deep shoulders, and short legs, neck, and ears.

“One mistake beginners are apt to make is to start out with poor stock. Good breeding stock costs five dollars per animal and up. A few superior animals can be the nucleus of a large and growing group of rabbits. Young does that show promise can be held from the market and added to the breeders. A good doe should be expected to earn at least six dollars net in marketable young after all expenses every year.”

A doe can be bred at the age of six months and may be bred four times a year thereafter. The young are born within a month’s time and from six to eight are saved out of each litter. The young animals are ready for the market at the age of two months, when they should weigh approximately four pounds. Butchers like all the animals to come within half a pound of that weight.

Without help and with the right equipment, one man can care for about 500 breeding does, although most people who are raising rabbits keep a smaller number and take care of them as a part-time occupation. One woman who started in three years ago with five does and one buck now maintains 100 working does in backyard hutches. A few hours work per day brings her a steady income of from forty to fifty dollars per month.

“In the first place,” Green explains, “one should prepare a proper place in which to keep the rabbits. The small animals need plenty of light and fresh air. They should be protected from heat and moisture. In the south the hutches may be kept under a simple roof but in the east and north the lower half of the walls of the rabbit house should be boarded in, leaving the upper part of the walls open except for canvas curtains that can be dropped during rain and storms. The animals need a protective roof even during the summer because their fur coats shouldn’t be exposed to hot sun. In hot weather a sprinkling system on top of the roof will help lower the temperature under it. A dirt or concrete floor under the hutches is best.

“The individual hutches should have ten square feet of floor space. Standard dimensions are four feet long, two and a half feet wide, and two feet high. The top, back, and ends should be built of boards if you live in a section having a cold winter climate, while if the climate is mild the top and back may consist of one-inch wire netting, allowing better circulation of air. The floor of the hutch should consist of five-eighths-inch mesh metal hardware cloth or netting, so that droppings can fall to the floor and be swept away. Consistent and complete sanitation is of the first importance. The hutches should be suspended about four feet above the ground by supports extending down from the roof as a protection from other animals. When eight or ten weeks old young animals have to be placed in individual hutches to prevent them from fighting.

“A two-compartment hutch saves time in feeding. The two full-size compartments are divided by a wire-mesh feeding rack into which hay and other greens may be placed, permitting both rabbits to reach the same food supply. A trough below the rack is provided as a place for hard foods. Nest boxes in which the does may raise their litters should be eighteen inches long, twelve inches wide, and thirteen inches high. A round door at one end should be seven inches in diameter, raised five inches from the bottom of the box. That will keep the young from climbing out until they can take care of themselves. The nest box should be roofed in cold weather and both the top and the bottom should be removable to facilitate cleaning and disinfecting. Some rabbit raisers use two tiers of hutches, one above the other, to conserve space, but cleaning is easier in single tiers.”

Greens and water are the main items of diet, any green hay such as alfalfa, clover, or even peanut hay being acceptable. All hay, of course, should be well cured and never musty or moldy. Oats, barley, wheat, and corn are also fed to the animals to balance their diet, with occasional small amounts of sulphur, charcoal, and cod-liver oil. Rabbits like carrots and should receive one occasionally. A block of salt should be placed in each hutch so that the rabbit may nibble at it. Feeding instructions and other hints in caring for rabbits are contained in bulletins issued by the Department of Agriculture and by some state universities.

Given proper care, rabbits usually remain healthy and free from many afflictions that trouble other animals. Two serious diseases, however, a nasal trouble known as snuffles and a worm infection called coccidiosis, are incurable. Rabbits infected by either should be destroyed at once and their hutches thoroughly sterilized to prevent spreading the disease. Most rabbit raisers feed their animals twice a day. Their appetite is a good indication of their state of health.

There are a number of other commercial breeds aside from the white New Zealand, including the red New Zealand, Flemish, Chinchilla, and Angora. The last two are raised exclusively for their fur or wool, which is extremely high priced. “Some people who have tried to raise rabbits in the past have dropped it when they failed to make money,” declares Green, “but they shouldn’t blame the rabbits. Raising them is a pleasant and profitable occupation and success with them takes proper management and attention to details just the same as in any other business. The fundamentals of success are good breeding stock, proper equipment and the right care.”