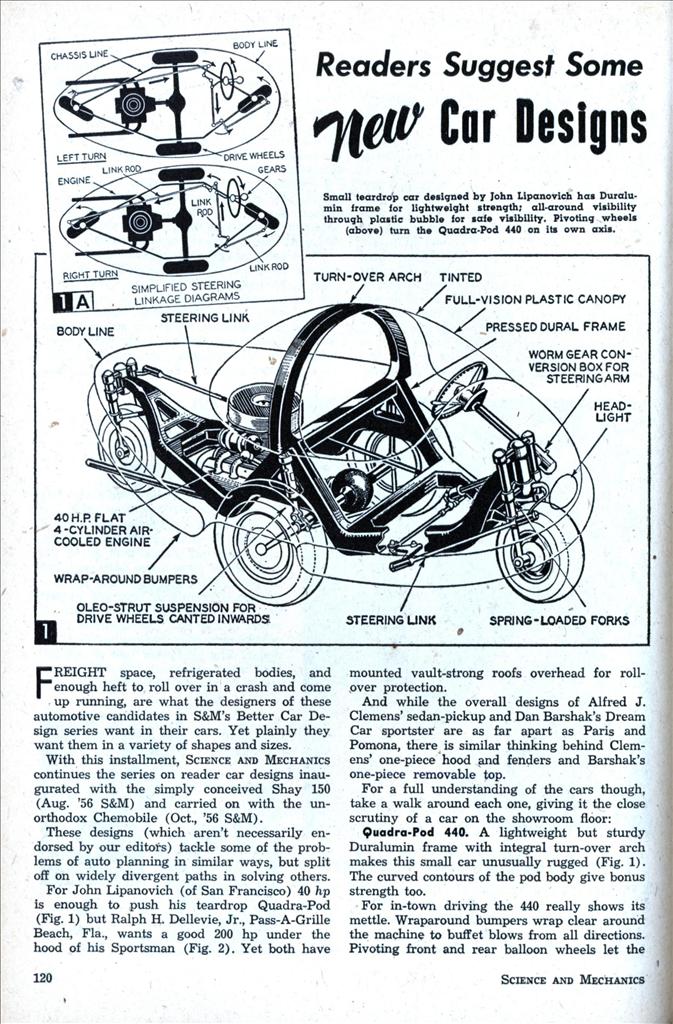 FREIGHT space, refrigerated bodies, and enough heft to roll over in a crash and come up running, are what the designers of these automotive candidates in S&M’s Better Car Design series want in their cars. Yet plainly they want them in a variety of shapes and sizes.

With this installment, Science and Mechanics continues the series on reader car designs inaugurated with the simply conceived Shay 150 (Aug. ’56 S&M) and carried on with the unorthodox Chemobile (Oct., ’56 S&M).

These designs (which aren’t necessarily endorsed by our editors) tackle some of the problems of auto planning in similar ways, but split off on widely divergent paths in solving others.

For John Lipanovich (of San Francisco) 40 hp is enough to push his teardrop Quadra-Pod (Fig. 1) but Ralph H. Dellevie, Jr., Pass-A-Grille Beach, Fla., wants a good 200 hp under the hood of his Sportsman (Fig. 2). Yet both have mounted vault-strong roofs overhead for rollover protection.

And while the overall designs of Alfred J. Clemens* sedan-pickup and Dan Barshak’s Dream Car sportster are as far apart as Paris and Pomona, there is similar thinking behind Clemens’ one-piece hood and fenders and Barshak’s one-piece removable top.

For a full understanding of the cars though, take a walk around each one, giving it the close scrutiny of a car on the showroom floor: Quadra-Pod 440. A lightweight but sturdy Duralumin frame with integral turn-over arch makes this small car unusually rugged (Fig. 1). The curved contours of the pod body give bonus strength too.

For in-town driving the 440 really shows its mettle. Wraparound bumpers wrap clear around the machine to buffet blows from all directions. Pivoting front and rear balloon wheels let the car turn on its axis to sashay clear of collisions in heavy traffic.

Lean down on the nose or tail of the 440 and notice how it jounces back up. That’s because of the motorcycle-style fork suspension. Airplane-style shock-strut suspension springs the drive wheels. On turns the car banks like an airplane.

Power? The two-seater gets plenty from its 40-horsepower, flat-four-cylinder engine carried under the rear deck behind the seats.

Step into the coupe through one of its sliding doors and settle back into a bucket seat. Front, back, above, all around there’s full visibility through the tinted plastic canopy. Steering might be a little problem until you get used to it (Fig. 1A), but with that transparent bubble on all sides you’re not likely to hit anything.

All in all, the Quadra-Pod could be a mighty safe car. In fact, it bears an almost family resemblance to a 500 pound, flatiron – shaped safety car suggested in 1952 by French inventor Gabriel Voisin (first man to install a gasoline engine in an airplane).

Sportsman. Take one look at this big car (Fig. 2), and you know that here is an automobile built for living. As you can see, its two main features are: (1) a mushroom cap roof for crash safety. It’s mounted on a welded structure of arched box girders and a ring girder, (2) a cargo box built where the rear overhang is located on most of the ’57 models. With the tailgate up, length for cargo is six feet; down, eight feet.

Restricted visibility should never be a problem with this car. Glass completely surrounds you on all sides, but the overhang of the mushroom roof acts as a sun shade and deflects snow and rain. When weather gets really bad though, four electric wipers, three on the windshield, one behind, whisk the windows clean.

Things should never get stuffy in the Sportsman, either. Notice that complete heating-ventilating system built into the double-skin roof. Fresh air is taken in through a front grill under the roof’s brow, out of the way of rain and snow, then through ducting between the roof layers and into heaters (in cold weather) also within the roof. Stale air exhausts through a vent at the rear of the mushroom roof.

And consider all the other features: (1) A jumbo rear-view mirror 18 in. wide for a big view behind; (2) Red warning light and buzzers on each gage to signal poor operating conditions; (3) Full padding throughout; (4) A jack outlet for plugging in lights, appliances, and tools; (5) Concealed cleats for cinching down cargo ropes; (6) Insulated interior panels made of washable plastic in colored wallpaper-style designs; (7) carpets of washable colored rubber; and (8) A 200-horsepower V-8 engine with a compression ratio of 8.5:1 that still can be run on regular ga^s.

Finally, before you leave the Sportsman notice its snappy paint job. Units would be shipped to the dealer with only the rust-protective first coat of paint, you can pick exactly the color scheme and pattern you like.

That such combination car-pickup units are not strictly dream-stage automobiles is demonstrated by the newly-announced Ford Ranchero shown in Fig. 3. Pickar. Here’s another machine (Fig. 4) that was built for going over rough or smooth roads, while toting everything from fertilizer to fancy-dressed guests from the city. It- has a lot in common with the Sportsman, but the emphasis here is on work —both with the car and on it For the professional man, businessman, sportsman, and farmer, its rugged cargo space makes an ideal pickup for hauling any kind of less bulky freight. And like the Sportsman, that freight space makes the Pickar an ideal vacation car since it can haul a lot of luggage. Covered with a tarpaulin and fitted with some kind of pads it would make a good sleeping place for a couple of campers.

Working on the car is made easier by such niceties as the cutout fenders; the one-piece clamshell hood and fenders which lift as a unit, and the cutout ports for checking water, oil, and other engine areas. Dream Car. From one extreme to another, look over the low, lunging shark-shape of this sports roadster (Fig. 5) laid out by Dan Barshak, Bay Shore, Long Island, N. Y. That removable top is a two-layer, transparent sandwich. When the sun beats down on it, a filling of liquid coolant flows between its layers, carrying away heat.

For vision to the rear backward-pointing television cameras and a dash screen take the place of rear-view mirrors. Costly ideas, there! Extensive interior padding, including pneumatic cushions on the dash, are installed to prevent injuries.