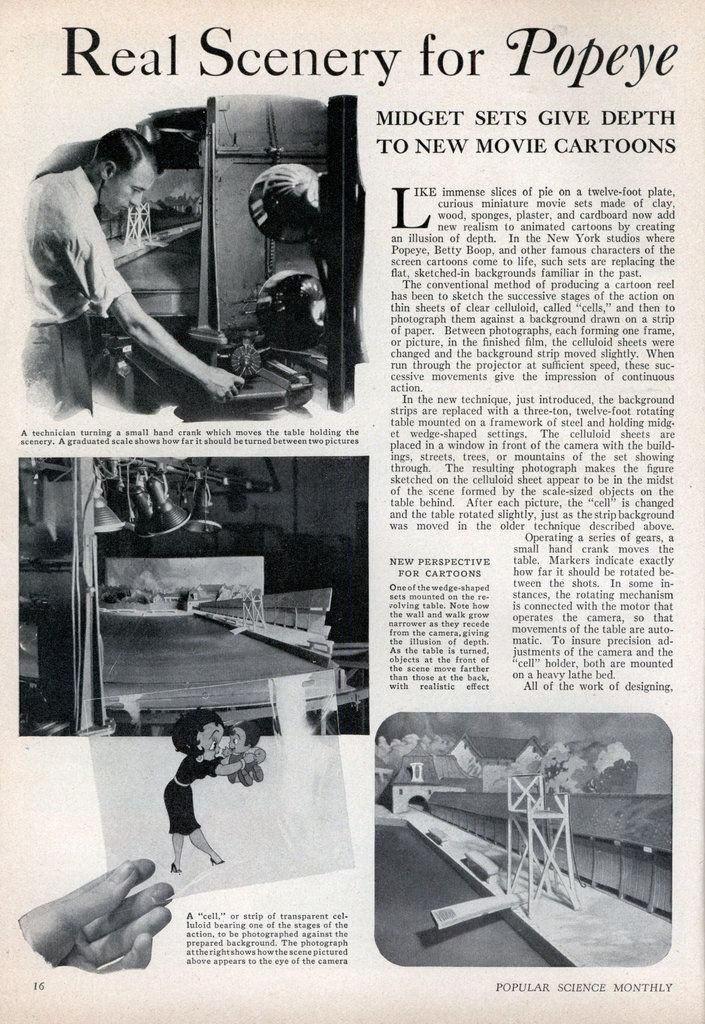 LIKE immense slices of pie on a twelve-foot plate, curious miniature movie sets made of clay, wood, sponges, plaster, and cardboard now add new realism to animated cartoons by creating an illusion of depth. In the New York studios where Popeye, Betty Boop, and other famous characters of the screen cartoons come to life, such sets are replacing the flat, sketched-in backgrounds familiar in the past.

The conventional method of producing a cartoon reel has been to sketch the successive stages of the action on thin sheets of clear celluloid, called “cells,” and then to photograph them against a background drawn on a strip of paper. Between photographs, each forming one frame, or picture, in the finished film, the celluloid sheets were changed and the background strip moved slightly. When run through the projector at sufficient speed, these successive movements give the impression of continuous action.

In the new technique, just introduced, the background strips are replaced with a three-ton, twelve-foot rotating table mounted on a framework of steel and holding midget wedge-shaped settings. The celluloid sheets are placed in a window in front of the camera with the buildings, streets, trees, or mountains of the set showing through. The resulting photograph makes the figure sketched on the celluloid sheet appear to be in the midst of the scene formed by the scale-sized objects on the table behind. After each picture, the “cell” is changed and the table rotated slightly, just as the strip background was moved in the older technique described above.

Operating a series of gears, a small hand crank moves the table. Markers indicate exactly how far it should be rotated between the shots. In some instances, the rotating mechanism is connected with the motor that operates the camera, so that movements of the table are automatic. To insure precision adjustments of the camera and the “cell” holder, both are mounted on a heavy lathe bed. All of the work of designing, building, and perfecting the apparatus, with its elaborate combination of trusses, cranks, and gears, was carried out in the experimental machine shop which forms a part of the New York studios. This research room is completely fitted up with electric machinery for working in both wood and metal.

The “slice-of-pie” shape of the sets gives them the proper perspective. Streets grow narrower as they recede from the camera; buildings diminish in size, and the ground slopes upward. The result is a realistic and natural perspective from the angle of the camera. If the sets were made square or rectangular and moved like a train of cars past the lens, they would give the impression of depth, as the sets do now, but the farthest objects would move as fast as the nearer ones and the effect would be unconvincing. The vanishing point, or place where parallel lines seem to meet on the horizon of the sets, is at the center of rotation of the table, six feet from the sheet of celluloid.

To increase the sense of depth in the new cartoons, characters are seen walking behind trees and posts. This is accomplished by moving silhouettes, mounted on a special carrier, between the lens of the camera and the figure sketched on the sheet of celluloid. The silhouettes used for this purpose are made from flat plywood or cardboard and carefully proportioned. Backdrops behind the sets are mounted on vertical rollers. These rollers can be turned at any desired speed to give varying effects that range from summer clouds drifting lazily across the sky to storms rushing past at top speed.

If full-color films are being produced, the objects in the set can be painted to give the hues desired. Also, colored lights playing over the miniature building and landscapes can be employed to create spectatular effects such as moonlight and sunset scenes.

In addition to rotating, the table which holds the sets can tilt vertically. The impression of rising over a set in an airplane is achieved by tilting the table downward. In some mountain scenes, the set is tilted up to give the view from the valley and down to give the view from the peak. This permits using the same set throughout, and results in a saving of both time and money.

Several sets can be prepared on the rotating table at the same time. As soon as the filming of one set is completed, the table can be swung to the next. Max Fleischer, who has patented the new technique, predicts that similar methods may be applied on Hollywood sound stages in the production of feature pictures.