This article really reminds me of the internet. Considering that there is a Facebook group called “The London 2012 olympics logo looks like lisa simpson giving head” (it really does) with 59,000 members, these clubs don’t seem nearly as weird as they probably did when it was printed.

Some of the clubs have a pretty interesting history. Check out the Wikipedia entry for Society for the Prevention of Calling Sleeping Car Porters “George”. 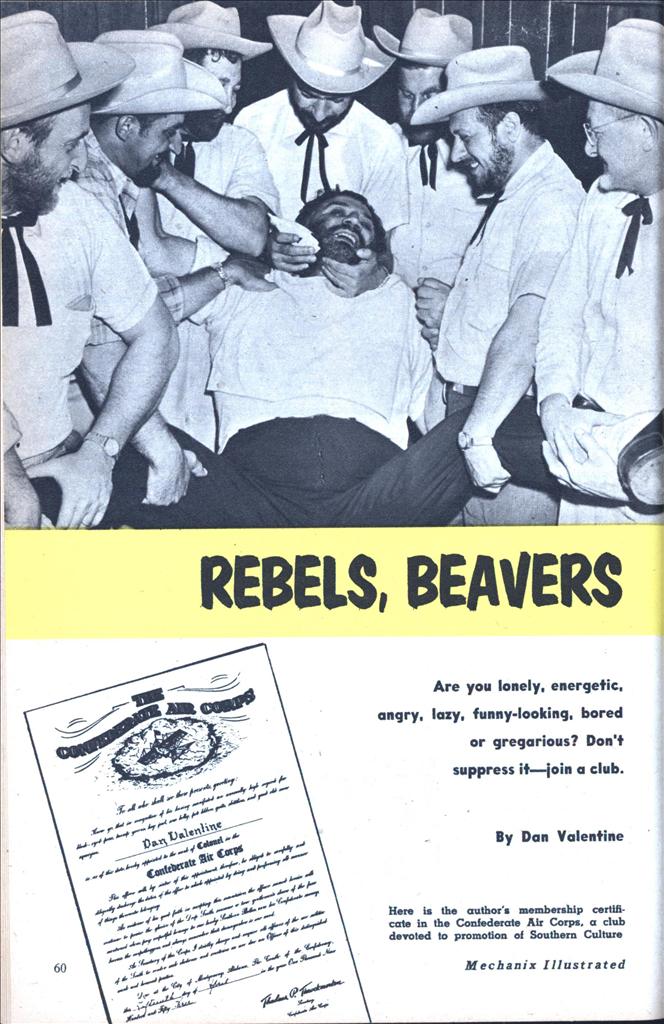 THERE’S an old saying that whenever three Americans get together on a street corner, they form a club and elect officers.

If there isn’t such an old saying, there should be, because America is club crazy.

There are clubs for bald-headed men, for fat ladies, for people who like salami.

There are clubs for tall girls, for people who see flying saucers, for lawyers who have been dispossessed by government agencies.

There are clubs for amateur liars . . . for nudists . . . for people named Duffy.

There are clubs for people who hate to shake hands, organizations for people born on the west coast who live on the east coast.

Americans are great joiners and it’s a poor American, indeed, these days who does not belong to at least one club, association or fraternal organization.

Ten times each year several hundred members of the National Baldhead Club, Inc., meet at their retreat near St. Cloud, Minn. (The retreat is named “Balder than a Boulder.”) Membership requirements for the ball-heads are a hairless dome and $1. Annual fees are $1.98. The president of the unique group is called the “Front Row Sitter.” It is mandatory for all members to address each other as “Curley” or “Baldy” and a member can be drummed out of the outfit for only one reason—wearing a wig. Official club song is “No Hair Grows on a Busy Street,” and the organization is currently waging a serious campaign to secure reduced rates for baldheads in the nation’s barber shops.

Maybe you’re a man who decries the passing of old-fashioned ham-bone soup. You can get in the fight and join the Ham-Bone Soup of America, headquarters Canton, Ohio, to bring back the delicacy to the nation’s dinner tables.

Or perhaps you worry about the fast-disappearing wooden Indians in front of cigar stores? Join the Society for the Preservation of Cigar Store Indians founded and headquartered in Baltimore.

If your name is Duffy and you’re interested in keeping the Duffy banner waving high, you are eligible for membership in the National Duffy Association in New York City. The group is named in honor of famed Irishman, Sir Charles Gavan Duffy.

On the other hand, if your name is Fred Smith, the Benevolent and Protective and Completely Universal Order of Fred Smiths is waiting for your membership application. Main platform of the society is to educate Americans not to use the name Fred Smith when registering at police stations.

For men who love to putter around the kitchen there’s the American Society for Amateur Chefs; for part-time big top fans there is the Circus Lovers Club of America.

Maybe you like goats? Okay, join the American Goat Society.

Do you cringe when passengers call the train porter “George?” You’re a natural for membership in the Society for the Prevention of Calling- Sleeping Car Porters George.

An old “sidewalk engineer” himself, Millard formed on the spot The Society for the Promotion and Encouragement of More and Better Sidewalk Engineers, and issued membership cards to several thousand Omahans. A special “observatory” was constructed on the sidewalk, complete with awning to shield the “engineers” from the sun.

And in Chicago, the Expectant Fathers’ Club is open to all soon-to-be-fathers. Regular meetings are held at which the members are taught the right way to diaper a squirming baby, how to warm a bottle in the middle of the night, and they take special training for midnight floor-walking.

The Husbands’ Protective Association was formed in Pittburgh several years ago and one of the main aims of the group is a continuous campaign to see that the man of the house receives a “fair and equitable share” of the weekly pay check.

So you sneeze in the Spring? Join the Heart of America Hay Fever Club. … Or you love fires, join the Fire Bell Club, chapters in leading cities. . . . Were’ you born in a covered wagon? You’re eligible for membership in the Covered Wagon Baby Club. … Or maybe you have a fondness for bow ties during business hours? There’s a Manhattan Bow Tie Wearers Club.

Maybe your name is Dick Hick, Mick Rick or Tick Tack. If so, you’re an official member of the Novel Nomenclature Club of New York City—whether you know it or not.

In Washington, D. C., so many lawyers were thrown out of office buildings to make space for government agencies that several of the more stout-hearted banded together to form the ATSGAPOSNBL—the Association to Stop Government Against Possessing Office Space Needed by Lawyers.

The “highest” membership requirements of any American club are boasted by the “52 Club” in Denver. It’s open only to people who have climbed each and every one of the 52 peaks in Colorado over 14,000 feet in elevation. The club has four women members in good standing, or rather, in good climbing.

Five years ago, in the middle of a Chicago snowstorm, several transplanted Californians grew homesick for their native Pacific Coast. They Recalled the sunny California skies and the orange trees and waxed nostalgic. Right then and there was formed the unusual Pacific Coast Displaced Person’s organization. It is composed of natives of the Pacific Coast who are forced to earn their living in the hinterlands and in New York City. Every member of the organization is a vice-president and the membership scroll points out that members “at great personal sacrifice have forsaken the Elysium Fields to breathe virility into the effete east . . .”

A 30-year campaign waged by an American businessman in Buenos Aires to combat handshaking is on the skids. Three decades ago Cyrus T. Brady, representative of the United States Steel Export Company, founded a Society to Abolish Hand-shaking. Just recently, on his transfer to an Australian post, Brady admitted the campaign had failed. The Society campaigned on the premise that shaking hands was a waste of time. At a banquet in his honor, where he admitted failure, Brady broke his rule and shook hands with everyone present.

A campaign to abolish “Dear” in business letters is faring better. The Society for the Abolishment of “Dear” in Business Letters is going full force with more and more business executives coming into the fold. The Society was founded by E. Willis Jones, Chicago advertising consultant, and he booms the campaign by furnishing special anti-Dear stamps (at 360 for $1) for businessmen to stick on correspondence.

One of the newest organizations is the Let’s Have Better Business Mottoes Association. This is the dream-child of Henry Scarborough, Chicago insurance man. For years, Henry railed against such uninspired mottoes as “Do It Now,” “Keep Smiling” and “Keep Your Chin Up.” To combat these time-worn mottoes, the Association sends out a fresh motto each month. Some of the latest releases have been: “What Can You Expect of a Day that Begins with Getting up in the Morning?” … “Money Isn’t the Best Thing in the World— I Just Happen to Like It Best.” … “If You Can Keep your Head While Others Are Losing Theirs—Maybe You Don’t Understand the Situation!” . . . “Talk To Me About Myself— I’ll Listen for Hours.” . . . “If You Can’t Convince ’em, Confuse ’em!”

If you’re a beer drinker, better inquire into the Loyal Order of the Ugly Mugs, a nonprofit organization in Philadelphia. Its members are all beer drinkers and own their own ornate and personalized beer mugs. Once a year, the Ugly Mugs gather for the annual National Froth Blowing Championship. The Mug who blows the head off his beer with the cleanest puff wins the title.

Largest mass producer of clubs and organizations is one Jack Jarvis, assistant city editor of a Seattle newspaper. Since he was 13 Jack has been spending his spare time at a basement printing press stamping out official membership cards for strange organizations. His most famous are: The Everybody Makes Mistakes But Me Association, The Society for the Return of the Old Look to Women’s Clothes, The Pointing with Pride and Viewing with Alarm Association, The Society for the Suppression of Wearing False Bosoms and the Society of Part-Time Sinners and Dented Halos.

A club in Minneapolis known as the Show-Off Society is dedicated to uninhibit bashful people. Weekly meetings are held in a Minneapolis hotel ballroom where candidates for membership are required to get up in front of the crowd and sing a song, speak a piece or perform on a musical instrument.

Main aim of the Show-Offs: To give the ham that exists in practically everybody a chance to pop out.

No longer active but still on the books is the SPCFFMPH—or the Society to Provide Comfort for a Fat Man in a Phone Booth. The group was formed to prove that somebody loves a fat man—even if it’s just another fat man. The members have gone on record in the past advocating the manufacture of special phone booths for fat folks, enlarged seats in movie theaters, and artificial laps.

But this is just one of the clubs devoted to fat folks. Oldest organization is the Fatties Anonymous Club for Ladies in California, dedicated, of course, to the task of reducing hiplines and making only one chin grow where before there were several.

Along this line also is Chocolate Covered Cherries Anonymous. Members are pledged —when they are tempted to eat a chocolate covered cherry or a candy bar—to race for a phone and call a fellow member who will talk him out of the craving.

Newest organization for hefty folks is Avoirdupois Anonymous founded in Illinois. Avowed purpose of the AA is to trim some 10,000,000 pounds of overweight from the people of Illinois.

The new AA plans to set up local groups of fatties who will meet each week for eight weeks for supervised weight-control supervision. After that, each member will report to AA headquarters periodically to prove he or she has been staying away from the mashed potatoes and banana splits.

If you’re still shopping for a club, there’s the National Grandmothers’ Club, limited, naturally, to grandmothers. . . . There’s the National Rocking Chair Club, membership limited to folks who like to sit in a rocking chair and rock back and forth while the world speeds on. … Or maybe you’re a nut on cactus. If so, join the Denver Cactus and Succulent Society. Present membership 15, all cactus fans. Motto of the Society: “I may get stuck with it; I’m sure to get stuck on it; But I intend to stick by it because I’m stuck on it.”

Last reports from headquarters of the Knights of the Doghouse, Inc., reveal 55,000 hen-pecked husbands belong to the national organization. They are banded together in local “kennels” throughout the nation.

Officers of the Knights of the Doghouse say the organization is open to “all those who are without honor at certain times in their own homes—in other words, for husbands who are in the doghouse.”

More than 70,000 liars (mostly amateurs but some politicians) belong to the famed Burlington, Wis., Liars Club.

The club was founded as a local prank back in 1929 by Otis C. Hulett. It was formally incorporated in 1933 and since then the club’s annual liar’s contest has gained world-wide attention and the results are front page news. Motto of the club is “Keep ’em Lying,” borrowed from the Air Force. The world’s champion liar is crowned each New Year’s Day and the bald-faced tall tales submitted each year by the world’s best liars come from all over the world, including countries behind the Iron Curtain where it is hard to separate lies from the truth and vice versa.

There’s no need to be lonely these days— join a club. •