Recordings Made of Electric Music (Apr, 1934)

Isn’t this a theremin? 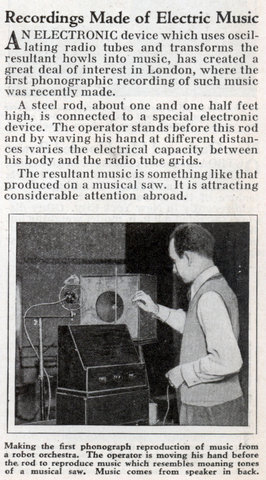 Recordings Made of Electric Music

AN ELECTRONIC device which uses oscillating radio tubes and transforms the resultant howls into music, has created a great deal of interest in London, where the first phonographic recording of such music was recently made.

A steel rod, about one and one half feet high, is connected to a special electronic device. The operator stands before this rod and by waving his hand at different distances varies the electrical capacity between his body and the radio tube grids.

The resultant music is something like that produced on a musical saw. It is attracting considerable attention abroad.