Refrigeration and Your Health (Aug, 1930) 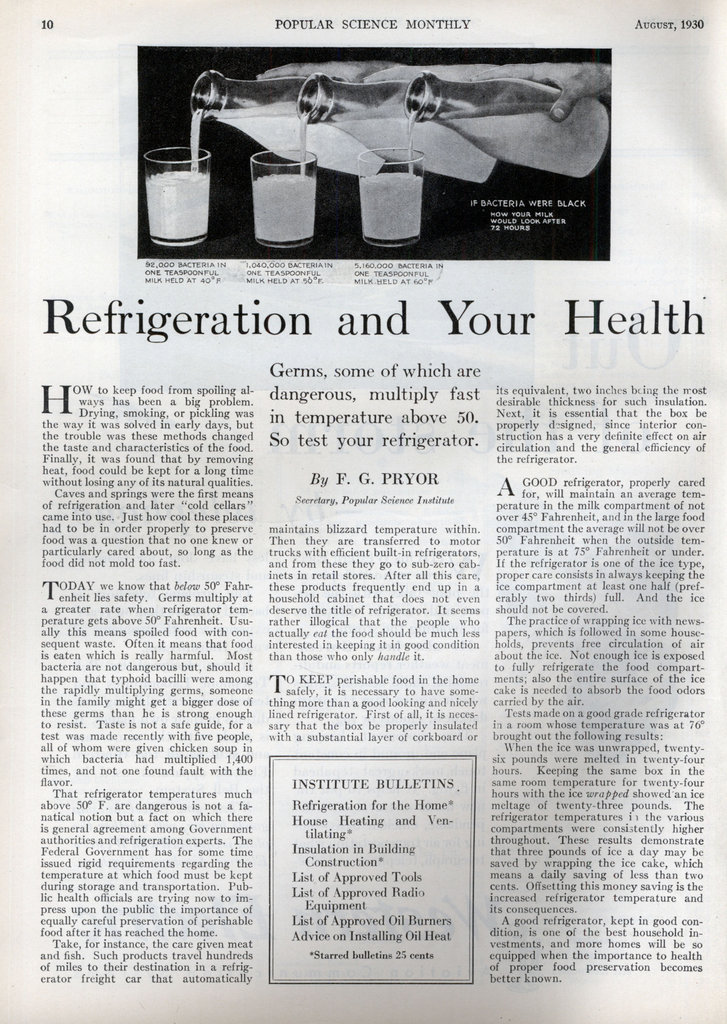 Refrigeration and Your Health

Germs, some of which are dangerous, multiply fast in temperature above 50. So test your refrigerator.

HOW to keep food from spoiling always has been a big problem. Drying, smoking, or pickling was the way it was solved in early days, but the trouble was these methods changed the taste and characteristics of the food. Finally, it was found that by removing heat, food could be kept for a long time without losing any of its natural qualities.

Caves and springs were the first means of refrigeration and later “cold cellars” came into use. Just how cool these places had to be in order properly to preserve food was a question that no one knew or particularly cared about, so long as the food did not mold too fast.

TODAY we know that below 50° Fahrenheit lies safety. Germs multiply at a greater rate when refrigerator temperature gets above 50° Fahrenheit. Usually this means spoiled food with consequent waste. Often it means that food is eaten which is really harmful. Most bacteria are not dangerous but, should it happen that typhoid bacilli were among the rapidly multiplying germs, someone in the family might get a bigger dose of these germs than he is strong enough to resist. Taste is not a safe guide, for a test was made recently with live people, all of whom were given chicken soup in which bacteria had multiplied 1,400 times, and not one found fault with the flavor.

That refrigerator temperatures much above 50° F. are dangerous is not a fanatical notion but a fact on which there is general agreement among Government authorities and refrigeration experts. The Federal Government has for some time issued rigid requirements regarding the temperature at which food must be kept during storage and transportation. Public health officials are trying now to impress upon the public the importance of equally careful preservation of perishable food after it has reached the home.

Take, for instance, the care given meat and fish. Such products travel hundreds of miles to their destination in a refrigerator freight car that automatically maintains blizzard temperature within. Then they are transferred to motor trucks with efficient built-in refrigerators, and from these they go to sub-zero cabinets in retail stores. After all this care, these products frequently end up in a household cabinet that does not even deserve the title of refrigerator. It seems rather illogical that the people who actually eat the food should be much less interested in keeping it in good condition than those who only handle it.

TO KEEP perishable food in the home safely, it is necessary to have something more than a good looking and nicely lined refrigerator. First of all, it is necessary that the box be properly insulated with a substantial layer of Corkboard or its equivalent, two inches being the most desirable thickness for such insulation. Next, it is essential that the box be properly designed, since interior construction has a very definite effect on air circulation and the general efficiency of the refrigerator.

The practice of wrapping ice with newspapers, which is followed in some households, prevents free circulation of air about the ice. Not enough ice is exposed to fully refrigerate the food compartments; also the entire surface of the ice cake is needed to absorb the food odors carried by the air.

Tests made on a good grade refrigerator in a room whose temperature was at 76° brought out the following results: When the ice was unwrapped, twenty-six pounds were melted in twenty-four hours. Keeping the same box in the same room temperature for twenty-four hours with the ice wrapped showed an ice meltage of twenty-three pounds. The refrigerator temperatures in the various compartments were consistently higher throughout. These results demonstrate that three pounds of ice a day may be saved by wrapping the ice cake, which means a daily saving of less than two cents. Offsetting this money saving is the increased refrigerator temperature and its consequences.

A good refrigerator, kept in good condition, is one of the best household investments, and more homes will be so equipped when the importance to health of proper food preservation becomes better known.