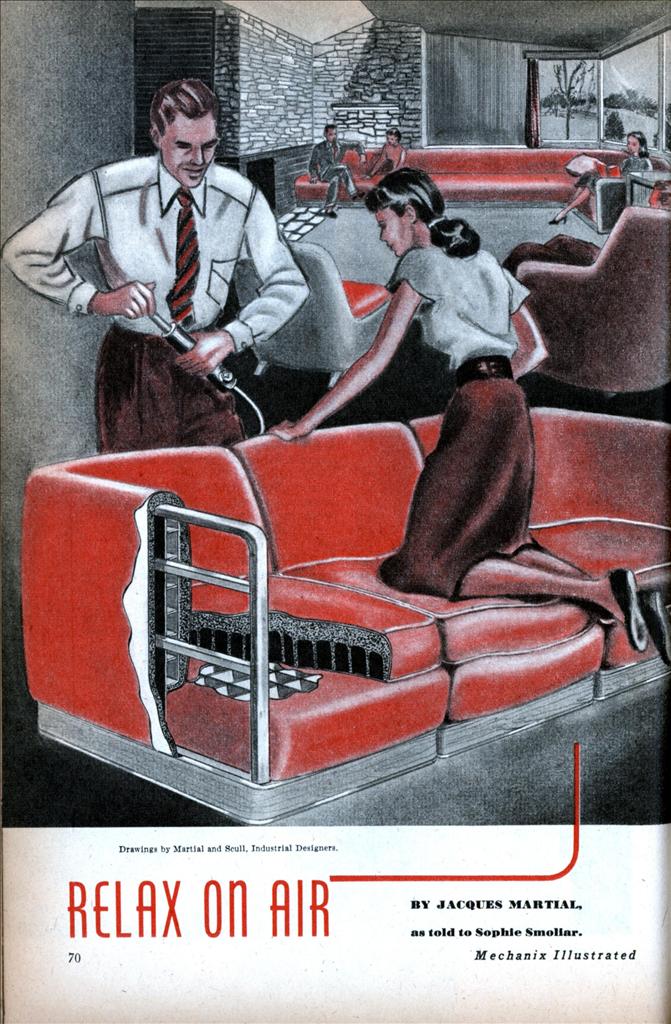 BY JACQUES MARTIAL, as told to Sophie Smoliar.

RELAX on air! That’s the promise of tomorrow’s rubber furniture which will soon be replacing much of the overstuffed, coil-spring type in common use.

Furniture manufacturers, long plagued by shortages of materials and also by a dearth of new ideas, have sought a way to produce comfortable and low-cost furniture. Now they claim to have found the answer in the principle of the air-filled rubber tube. With inexpensive materials and simple assembly, manufacturers foresee mass production with furniture prices spiraling downward.

The first rubber furniture on the market consisted of solid wood pieces covered with a thin layer of rubber, a far cry from the double spring action of upholstered stuffed furniture. The second step was the development of the use of foamed latex. This was better but does not compare with newer combinations which, like rubber tubes, combine air and rubber for resiliency and so-called good posture pieces that rebound to original shapes without prompting.

The war interrupted the application and further development of foamed latex which went to cushion our fighting men against concussion. Before Pearl Harbor, however, the material did appear in seats for automobiles, trains and buses.

Foamed latex, according to the Rubber Manufacturers Association, is a network of open or interconnecting cells made from rubber latices or liquid rubbers and manufactured in sheet, strip, molded, or special shapes. For those who are unfamiliar with it, latex in its pure form, is the milky juice or food supply stored inside the bark of a rubber tree. It looks like cream and is almost tasteless and odorless.

A small quantity of latex is whipped by a machine resembling a giant egg-beater. During this process, compressed air is forced into the mixture along with a jelling agent to produce what looks like an angel cake batter containing millions of tiny air bubbles. The liquid is then poured into a mould, covered, and either baked or vulcanized for 30 minutes. The finished product has a satin-smooth top surface and underneath, has a light, completely porous body honeycombed with millions of tiny interconnecting cells.

Cellular rubber has been used in the past as an insulator for refrigerators and as a buoyant material for life-saving equipment. Not to be confused with sponge rubber which it resembles in feel and appearance, cellular rubber has certain properties possessed by no other material. It is lighter than cork and is moisture-proof. It derives its cushioning capacity from millions of microscopic cells filled with nitrogen— 250,000 per cubic inch.

These tiny cells allow the material to conform immediately to the shape of the object thrown against it, giving support and at the same time exerting pressures that offset the effects of a heavy blow. The air in sponge rubber escapes from the area where a blow is delivered, whereas in cellular rubber the gas trapped in each cell behaves like little balloons.

In a spectacular demonstration of the softness of cellular rubber, representatives of the United States Rubber Company dropped fresh eggs from the roof of an eleven-story building onto a three-inch thick pad of the new material. Eggs which missed the pad were, of course, smashed on the sidewalk. Those hitting the rubber target bounced back into the air—in some cases as much as 25 feet— and were caught unbroken by an assistant.

In addition to the softness of material, the new furniture will depend for comfort on air-filled sections of two types— single tube or multiple compartments with connecting air holes. Valves will be installed somewhere in the seam of the cushion. When air must be replenished, a small hand pump will easily supply the necessary low air pressures. Pumping should not be required more than once in one to three months.