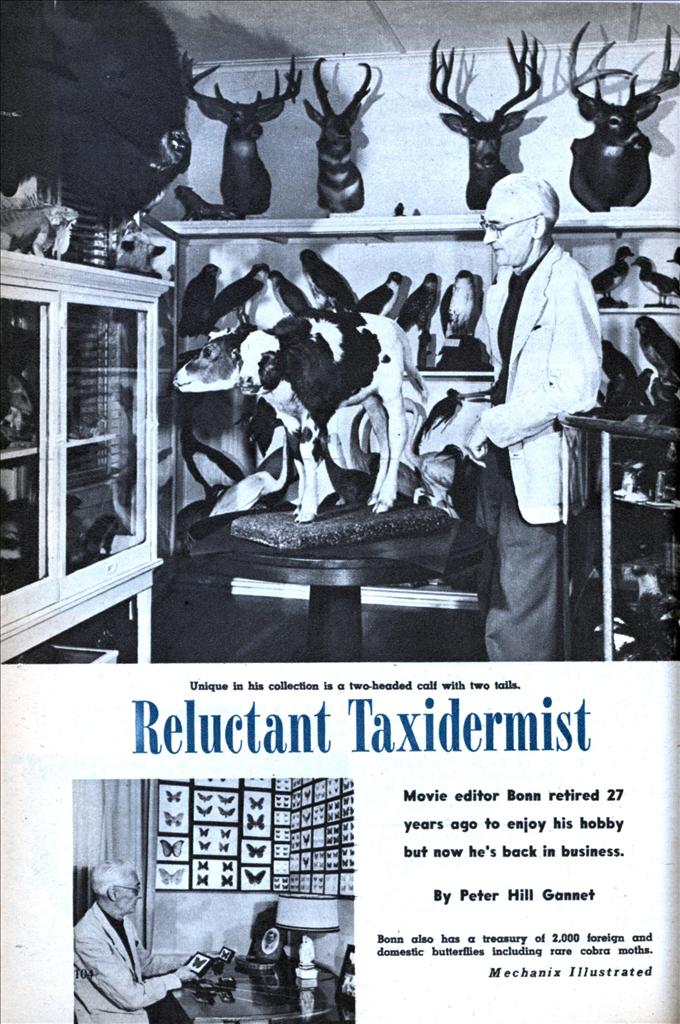 Movie editor Bonn retired 27 years ago to enjoy his hobby but now he’s back in business.

Taxidermy was only his hobby and at that time he was rather new at it. He’d been a fan only three years. It had always fascinated him, perhaps because of his love of animals and his appreciation of their beauty. It would be natural for him to try to duplicate nature’s handiwork.

Now his museum in Sheffield, Mass., about 25 feet square and built at a cost of $7,000 houses over 1,500 birds and animals ranging from a passenger pigeon extinct for 40 years to an unborn calf. Included are a Tragopan pheasant from Nepul, a huge king vulture from South America, anodd Paradise crane from Africa whose delicate wings touch the ground, an African crown crane with a stylish pompom, three birds of Paradise, a case of 66 native songbirds, an almost complete collection of North American wild ducks and geese and, in addition, over 800 animals. Such is his hobby. But Bonn is in business, too.

A hobbyist with a rare and valuable collection likes to show off his trophies and Bonn is no exception. The only trouble has been that almost everyone to whom he has done so, seems to have had a specimen or two he has wanted the taxidermist to mount for him. And the ex-movie editor is so adept and skillful in any mounting job he undertakes that his reputation has spread by worddia on a picture-taking expedition when the famous actor died.

Most of Bonn’s current business is, of course, from sportsmen who bring him their fish, deer, woodchucks and foxes and beg him to mount them. In 1953 he filled over 100 such orders reluctantly, because, since he is an artist, he devotes just as much meticulous care and painstaking skill to every job he undertakes, not only his own, and such an attitude does not make for production-line techniques.

He considers birds the easiest creatures to mount since the body consists of a wire frame with molded paper covering upon which the skin is stretched. And the feathers retain their natural color and need no doctoring. Fish are difficult, he claims, since the skinning must be done with as much skill as an expert surgeon employs during a delicate operation. And the body must be carved from balsa wood. For example, it takes him about two hours to mount a pheasant but far longer to do a workmanlike job on one of the finny species.

The taxidermist’s tools are a scalpel, scissors, draw-knife, arsenical soap, borax, needle and thread, paper mache, wood wool and wire —and an infinite amount of skill and patience. A deer head, for example, begins with the skinning and later shaving down of the skin with a draw-knife. Then the skin must be fitted to a mannikin head with the mannikin ears fitted in place. Then the horns are bolted on. Sounds easy? It looks easy, too, when one sees Bonn at his worktable. One imagines a young interne receives the same sensation while watching a famous surgeon’s nimble fingers at work.

They’re exceedingly low, proof that Bonn is a true artist and hobbyist, not a businessman. But don’t rush for a pen-and-paper to ask him to do your mounting job. He’ll probably refuse. But if you should be driving past his museum on the Sheffield road which stretches between Canaan, Conn, and Great Barrington, Mass. and should decide to drop in for a chat, and if he should decide to accept you as a friend, you might be able to persuade the reluctant taxidermist to reincarnate your trophy in all its vivid coloring and naturalness of true life.